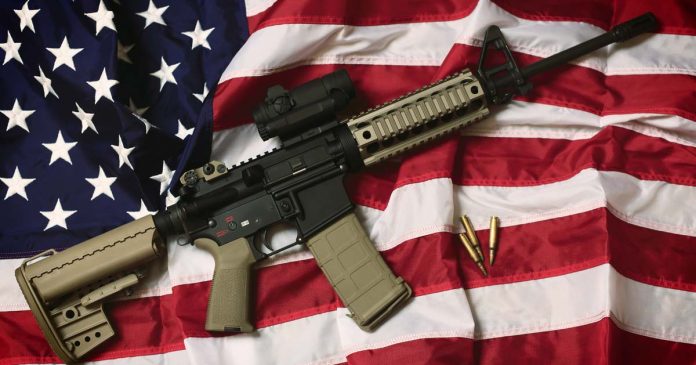 President Biden on Wednesday pushed for several gun bans and told reporters, “The Second Amendment is not absolute.”

The President used the latest mass shooting as a rallying cry to ban guns – the shooting that law enforcement agents and the FBI again failed to stop, despite the shooter’s past behaviors and getting into a shoot-out with the shooter before entering an elementary school. But, of course, Biden failed to mention that. So instead, he focuses on using this tragedy to take away your freedom and ability to protect yourself from these criminals.

“The idea that an 18-year-old can walk into a store and buy weapons of war designed and marketed to kill is, I think, just wrong,” Mr. Biden said. “Just violates common sense. Even the manufacturer, the inventor, of that weapon, thought that as well. You know, where’s the backbone?”

“The Second Amendment is not absolute. When it was passed you couldn’t own a cannon. You couldn’t own certain kinds of weapons. There’s always been limitations.” pic.twitter.com/ctttgPcNlU

Former President Obama, who many suspect is really running the show behind the scenes, used the tragedy to promote the criminal piece of George Floyd — seems like they are trying to again enflame racial tensions and trying to move the focus away from who this shooter really is!

In the aftermath of his murder, a new generation of activists rose up to channel their anguish into organized action, launching a movement to raise awareness of systemic racism and the need for criminal justice and police reform.

He then oddly used the school shooting to call for activists to take action against the police. These people are SICK!!!

According to our sources in D.C., the Democrat party fully believes they will be able to start taking guns from their opposition quickly and easily. In fact, the fact that they could get so many so-called patriots to bow down and obey two years of mask mandates has given them the confidence to think they can do it without a fight.

The fact that so-called patriotic Americans did nothing to actually fight back after two years of mask mandates, vaccine mandates, and shutdowns has shown them that the will of the American people is broken, and they consider most patriots nothing more than paper tigers.

They also believe that if they strike quickly, many Republicans will follow. As we’ve pointed out over the years, from Nixon to Bush the Republican party has a long history of helping the left kill our 2nd amendment rights!

As we’ve reported numerous times over the years, none of these problems are caused by gun ownership; they directly result from our culture. Yet, sadly, the mainstream media refuses to report that it’s not the guns; it’s our culture, our youth, and our shitty public school systems that liberal politicians and their twisted ideologies have corrupted.

Every time a school shooting occurs, we are lectured on how bad we are as gun owners and how evil AR15s are the problem. But why is it we never hear about the other violence that happens in public schools? The epidemic of rapes inside schools, the record violence that has swept public schools over the last decade, and the hundreds of stabbings that happen every year in the hallways of these schools?

Far more kids are stabbed in our schools every year than have ever been shot in school shootings, so why doesn’t anyone talk about those cases?

School Shootings are Rare compared to other Violent Crimes in Public Schools.

School shootings are rare and are an unusual form of school violence; they account for less than 1% of violent crimes in public schools, yet they receive almost 100% of the mainstream media coverage.

If the media reported on school stabbings, school rapes, and school violence, most of the country would have to wake up to the fact that we don’t have a gun problem, we have a culture and a public school problem. Instead, our schools have become liberal death zones that are more interested in pushing liberalism than teaching or protecting our children.

A Culture of Violence: The celebration of everything that’s wrong with
America

When will we stop blaming guns and start blaming our sick culture? I find it pretty ironic that the same idiots in the media who yell the loudest about gun control legislation are the same people who can’t stop fawning over every bit of filth pushed out of Hollywood. These people are obsessed with violence, and they promote it every chance they get.

US and Côte d’Ivoire Special Operations Forces -The Firearm Blog

extreme striking error on some of them.