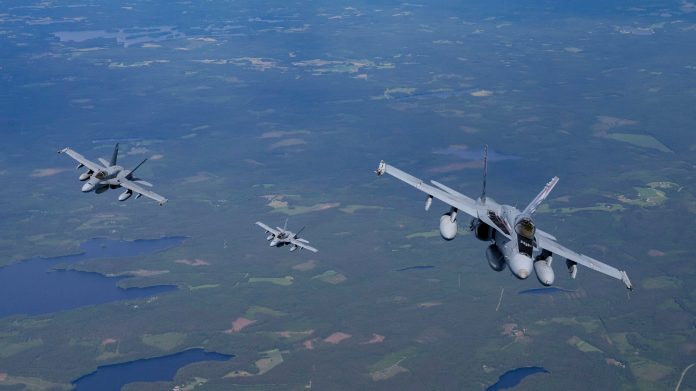 WASHINGTON: Finland’s top diplomat said the country hasn’t seen an uptick in Russian aggression since it decided to join NATO, but suggested the US should assist in Finland’s ability to “react rapidly” in the event its much larger neighbor does take malevolent action.

Finnish Foreign Minister Pekka Haavisto told the Center for Strategic and International Studies today that since the NATO announcement days ago, Russian activity against Finland has been “normal,” except for “some” violations of Finnish airspace and Russia shutting off a natural gas pipeline that runs between the two countries. He added that those reprisal actions were “nothing surprising.”

But when asked what his nation needs in the way of security assurances from the US as it goes through the NATO application process, Haavisto said, “At the moment, our border is peaceful — no particular threats. But of course, the capability to react rapidly if some threats occur.”

Finland and Sweden announced that they would formally seek NATO membership on May 18, nearly three months after Russia invaded Ukraine. The Nordic nations’ move toward NATO has largely been welcomed by NATO members, with the exception of Turkey, and several Western officials have expressed their support. Haavisto is in Washington for meetings with senators and high-level US officials, including Secretary of State Antony Blinken.

While Sweden and Finland aren’t members of NATO, they have been observers of the alliance through a partnership that allows the non-member countries to cooperate with the alliance. The formal security umbrella won’t fall over Finland or Sweden until they’re ratified as members of the alliance, but when the pair formally announced their decision to join, President Joe Biden pledged to aid the Nordic nations against threats from Russia.

“While their applications for NATO membership are being considered, the United States will work with Finland and Sweden to remain vigilant against any threats to our shared security, and to deter and confront aggression or the threat of aggression,” Biden said in a statement the day the applications were announced.

Speaking Thursday at his confirmation hearing to become Supreme Allied Commander Europe, Gen. Christopher Cavoli said the addition of Finland and Sweden would bring “quite a bit” of military capability, specifically pointing to Sweden’s navy Finland’s experience defending its border with Russia.

But one issue challenging NATO is pushing its members to meet the mandate of spending 2% of GDP on military. Cavoli said he supports NATO members spending more than 2% and pushing the alliance to self-fulfil more military capability, specifically long-range fires, logistics, armor vehicles, and air and missile defense. Finland is already surpasses that spending threshold, Haavisto said.

“We are exceeding the 2% GDP so we are fulfilling the NATO requirement,” he said, adding that the nation has also recently ordered 64 F-35s.

Finland and Sweden joining NATO means that the entirety of the Baltic Sea coastline, excluding the Russia enclave of Kaliningrad, will be alliance members. In his testimony, Cavoli said that would have “geometric dilemmas” for the Russian navy.

In an interview earlier this month with Breaking Defense, the Norwegian defense chief said the addition of its Scandinavian neighbors “opens up a lot of possibilities” for the defense of the large peninsula.

Turkey appears to be the main impediment to Finland and Sweden joining the alliance, accusing the two countries of harboring terrorist groups. Haavisto said that a Finnish delegation in engaged in continuous conversations with Ankara over their concerns and the countries have agreed to continue discussions.

“We are also testing the open door policy of NATO. If NATO has open doors or not,” Haavisto said. “We think that it has [open doors], but this is of course now … up to the NATO how to handle this process.”