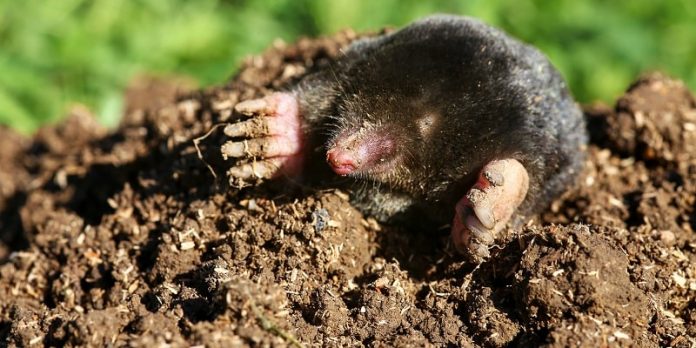 Living a self-sustainable life can be hugely rewarding.

Picking a selection of fresh vegetables for your dinner each evening is one of the most gratifying parts. Until you realize the full extent of the mole damage!

We’ve lost innumerable vegetables and other plants to moles, which damage as they tunnel around in search of earthworms and other subterranean delicacies.

I don’t want to make a mountain of a molehill, but this is becoming a matter of life and death. Without our homegrown vegetables, we can’t continue our self-sustainable lifestyle, so the moles have got to go.

Many people recommend castor beans as a type of homemade mole poison, but in order to be effective, the mole must first consume them.

According to an article published by the University of Arkansas, that isn’t possible as moles’ teeth aren’t designed for eating seeds. As the moles are unable to ingest the castor beans, these toxic seeds lie around, posing a potential danger to children and pets instead.

Castor oil is perhaps safer than castor beans but, although potentially fatal, is unlikely to give your moles anything more serious than a stomach ache.

Castor oil causes contractions in the bowel muscles that could prove fatal, but in most instances, the mole will only consume enough to upset his stomach.

Moles can be deterred by castor oil because they start itching the moment they come into contact with it.

If you’re determined to get rid of moles once and for all, this mole deterrent might do the trick. Combine castor oil pellets or granules with a few earthworms and a cup of soil. Sprinkle the mix at the entrance to an active mole tunnel.

In theory, the mole will eat the castor oil granules as it greedily feeds on the earthworms.

With an aching stomach and itchy skin, the mole should quickly reroute its tunnels and find a safer, more comfortable place to feed.

Using Marshmallows To Get Rid of Moles

While there’s no scientific evidence to prove that marshmallows kill moles, many people swear by it.

Putting marshmallows into mole holes does seem like an odd way to spend an hour, but if it means the moles relocate, it’s worth a try.

Marshmallows may simply put moles off, but there is some evidence to suggest that this innocuous-looking confectionary may actually be toxic.

Commercial marshmallow manufacturers use all sorts of flavorings, preservatives, and other chemicals to enhance their products. These include carrageenan, which is used as a thickener and gelling agent, and tetrasodium pyrophosphate.

These extra ingredients could be why marshmallows are potentially dangerous for moles. Carrageenan causes bloating and inflammation, so if consumed by a mole, could prove difficult to digest.

Tetrasodium pyrophosphate, on the other hand, reacts to dirt and earth. If that reaction occurs inside the mole’s body, it could prove fatal.

The marshmallow’s high sugar content may be enough to disrupt the mole’s digestive system after a lifetime of eating worms as well.

To try the marshmallow approach, first, locate the ends of the tunnels the moles are using. There may be several openings, so a thorough search is required. Place a few marshmallows in each hole you find. Experts recommend putting three to five marshmallows at each entry and exit hole.

Check on the holes regularly and replenish your marshmallow deterrent where necessary. Continue doing this until there is no further sign of mole activity.

It’s unclear whether marshmallows are poisonous to moles or simply encourage them to relocate, but this method does appear effective. I haven’t tried it yet, but I think it might be worth a go.

One of the benefits of marshmallows is that no other lives are risked in the process. A marshmallow or two won’t kill your dog or child, even if it is a bit dirty.

Although there are numerous recipes for homemade rat poison, getting rid of moles is a lot more complicated.

Moles feed on earthworms and other grubs, but they don’t always eat their prey straight away. Somewhere in their labyrinth of tunnels, moles have a type of underground pantry where they store several hundred worms at any one time.

This behavior means you can never be sure when the mole has eaten poison or whether it’s been effective.

It’s also impossible to rid your garden of bugs, so there’ll always be something more tempting than poison for your moles to eat.

As you can’t remove all the worms and bugs, any poison you put out for the moles is likely to be consumed by them as well. That isn’t too much of a worry with cutworms and other destructive critters, but vegetables won’t grow without earthworms, so we can’t afford to poison them in the process.

With so many problems associated with poisoning moles, it seems sensible to investigate alternative ways of getting them out of your garden, even if they only relocate next door!

5 Ways To Get Rid of Moles Without Using Poison

Pure castor oil does appear to deter moles, but this recipe for a homemade mole repellent is even more effective:

Combine the ingredients in a clean bottle or jar. Shake well to blend. Soak cotton wool balls in the liquid for at least 15 minutes. Place the prepared cotton wool balls at the entry and exit holes of the moles’ tunnels.

To make up for their poor eyesight, moles have a highly developed sense of smell. They find strong odors, such as the smell of peppermint or the sharp, smokey scent of cayenne pepper, extremely off-putting.

Moles rely on their sense of smell to locate food and avoid predation, so will quickly move away from areas where that sense is compromised.

We have used this repellent with some degree of success. However, in an area as large as ours it’s challenging to find every opening the moles are using.

Making a spray by diluting pure castor oil means you can cover a wider area more efficiently than you can with the homemade repellent.

Combine three parts pure castor oil with one part detergent. Add four tablespoons of this mixture to a gallon of water. Using a spray bottle, apply evenly to your garden. Repeat as necessary.

This approach isn’t as effective as the castor oil mole repellent as the solution is weaker. Any stronger, however, and you’d damage your plants or lawn. As the solution is less potent, it also needs reapplying more frequently.

Smoke bombs are designed to give off pungent gas that kills burrowing animals such as moles and gophers.

For a smoke bomb to be effective, you need to place it directly into the main runway or nest and block all the access holes before letting it off.

The trouble is, that a high percentage of bombs fail to burn effectively and are spat out by the moles the next day. You also can’t use these bombs in a vegetable garden or near anything edible.

According to an article in The Washington Post, “trapping is the most efficient control” for moles.

Harpoon traps like this one are easy to use and highly effective. They can only kill one mole at a time, but as moles are solitary creatures, you’re unlucky to encounter more than one at any one time.

Before setting the trap, locate one of the mole’s tunnels. Place the trap over the tunnel, pushing the legs into the ground on either side.

When the mole arrives, it will push against the trap in an attempt to reopen its thoroughfare. This action will trigger the trap, causing the sharp tines, or harpoons, to release, killing the mole.

As moles are nocturnal, trapping will be more effective at night. This approach is also safer as it reduces the risk of children or pets coming into contact with the traps.

While effective, trapping does take time. You may also find that new moles move into the abandoned tunnels, forcing you to trap them as well.

In most places, trapping moles is perfectly legal, but if you’re in Washington State, you may need to find an alternative mole deterrent. In Washington State, the use of “body-gripping” or “snap trap” mole traps is banned, so you may have to resort to using a deterrent instead.

The theory behind ultrasonic mole deterrents is that they confuse the mole by emitting low-frequency ultrasonic waves. These are supposed to upset the mole’s delicate sensory organs and send it scurrying for the hills.

The best ultrasonic mole deterrents are solar-powered and waterproof. They have a range of around 7,000 square feet, so should eliminate all the moles from the average backyard.

We used one of these deterrents in our garden but I doubt it had much effect beyond 2,000 square feet. It also proved to be a short-lived solution. It was as though the moles adjusted to the ultrasonic waves and learned to put up with them. After about six weeks, we had just as many moles in the area as we had before installing the deterrent.

This isn’t a definitive list of all the ways you can try and eradicate moles from your garden. I haven’t mentioned shooting them or trying to flood them out because, quite honestly, they sound a little excessive and not very effective.

Going forward, I’m going to try the marshmallow technique (if I can resist eating them myself), and if that doesn’t work, it looks like a trap will be the only viable option.

Also see our guides to:

When Is it Time to Stop Pulling the Trigger?