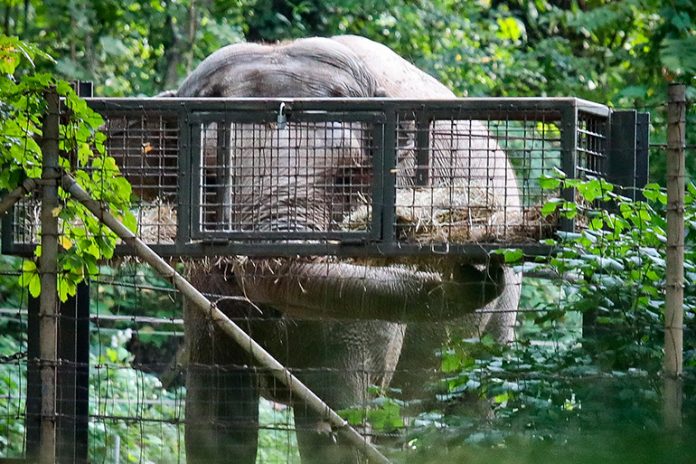 Human judges at the New York Court of Appeals appeared irritated that human attorneys representing an anti-hunting group clogged up their docket to argue that Happy the elephant, an animal in the care of the Bronx Zoo, is not an animal but instead is ‘a person.’

The case has wide-ranging implications on hunting, conservation and animal agriculture communities and for wildlife management from sea to sea.

“If Happy is a person, does that mean that I couldn’t keep a dog?,” Judge Jenny Rivera asked the attorneys representing the Nonhuman Rights Project, Inc. (NhRP). “I mean, dogs can memorize words.”

The case has been pending for a couple of years but the antihunting group finally got their day in court. Happy the elephant was not in court and instead remained at the zoo.

Happy is a 50-year-old elephant in the loving care of Bronx zookeepers for the past 45 years. She’s been cared for, well fed, bathed and watched over during her peaceful life. Happy even has a social life with visitors and other elephants. This isn’t good enough for NhRP though. They brought the zoo to court in 2019, suing – for a second time – to extend human rights to Happy.

“Happy is an autonomous, cognitively complex elephant worthy of the right reserved in law for ‘a person,’” NhRP told media last week, arguing their case based on grounds of habeus corpus, or the legal doctrine stating Happy is a human person being held against her will. The case involving Happy was rejected by Bronx Supreme Court Judge Alison Tuitt last year and marked the fifth time the group has lost a fight to claim legal personhood for animals. But the case now was in front of the New York Court of Appeals, the state’s highest court, where NhRP tried yet again. “She has an interest in exercising her choices and deciding who she wants to be with, and where to go, and what to do, and what to eat,” NhRP’s attorney pleaded. “And the zoo is prohibiting her from making any of those choices herself.”

The Bronx Zoo wasn’t having it. “The blatant exploitation of Happy the elephant by NhRP to advance their coordinated agenda shows no concern for the individual animal and reveals the fact they are willing to sacrifice Happy’s health and psychological well-being to set precedent,” a zoo spokesperson said. “Happy is well cared for by professionals with decades of experience and with whom she is strongly bonded.”

The court seemed skeptical of NhRP’s argument. An attorney representing the Bronx Zoo added, “If there’s going to entirely be a rewrite and a granting to animals of rights that they never had before, shouldn’t that be done by the Legislature?”

The case, as absurd as it sounds given that NhRP has lost earlier challenges, does have implications for hunters and conservation. Next NhRP or the anti-hunting Humane Society of the United States (HSUS) will represent whitetail deer in a class action to end deer hunting. Even the animal agricultural community is watching closely. If an elephant is ruled by a court to have “personhood,” then what’s to stop animal rights groups from suing to free cows, or pigs, or chickens or pheasants?

The New York Farm Bureau and other agriculture groups submitted an amicus brief, or friend-of-the-court, agreeing with the zoo and rejecting NhRP’s “new-fangled theory of personhood,” warning, “Worse, if any of those habeas petitions succeed in securing the release or transfer of livestock…the downstream effects also would be serious.”

It’s easy to see how a win for NhRP would be a severe loss for hunters and conservationists and would be felt by all and have generational consequences.

During the coronavirus pandemic, America experienced a phenomenon that brought millions of Americans into the hunting community. The hunting renaissance was far-reaching as Americans young and old, from all backgrounds, races and creeds took up hunting to seek fresh air and some natural outdoors social distancing. Hunting license sales and permits set records in many states and the trend kept going throughout. All told more than 40 million firearms have been sold over the past two years and a significant number have been for hunting purposes.

All those firearms being purchased, the ammunition needed for practice and range time, and hunting licenses and permits purchased are literally paying for the future successes of America’s wildlife for generations to come. Every time a hunter or sports shooter purchases a firearm or ammunition, manufacturers pay an excise tax that is dedicated to wildlife conservation efforts nationwide through the Pittman-Robertson Act. This year, Pittman-Robertson surpassed the $15 billion mark in contributions to the Wildlife Restoration Trust Fund since its inception in 1937.

NhRP should be careful what they wish for. Happy is enjoying a wonderful life and a long-shot victory for the antihunting group would be devastating for America’s wildlife. Encouraging more hunting and conserving these habitats and species is the ultimate animal rights effort. Hunters are the original conservationists. We’re happy for Happy that she’s being cared for in the Bronx zoo.

Best combat boots for women of 2022