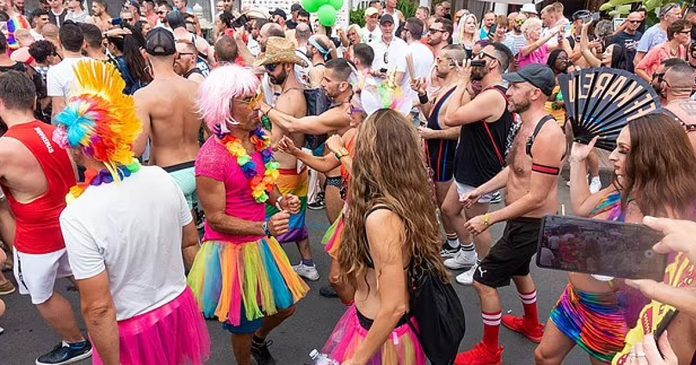 The first mandatory quarantine for monkeypox has been introduced in Belgium, which recently hosted a massive gay pride and fetish festival which experts now believe was one of the main sources for the global spread. The sex festival was attended by an estimated 80,000 gay people in Antwerp.

While the mainstream media is feverishly trying to kill the story of how this happened, today the Monkeypox outbreak has been linked to GAY Men having sex with other Men at Gay bathhouses in Spain and a Gay Pride festival in Gran Canaria.

They believe many of the infected can be traced back to the gay pride and fetish festival. “The Gran Canarian pride festival attended by 80,000 from Britain and across Europe is being investigated after being linked to numerous monkeypox cases in Madrid, Italy and Tenerife,” the Daily Mail reported.

“Held between May 5 and May 15, Maspalomas Pride attracts visitors from across the continent,” the report continued. “It was attended by people who have tested positive for the monekypox virus afterwards, with public health services from the Canary Islands now investigating the any links between the cases and the LGBT+ celebrations.”

On the organizers website, the company informed visitors visitors of Darklands 2022 that the health department of the Belgian government has confirmed at least 3 cases of the Monkeypox virus linked to visitors at Darklands.

The Belgium government released a statement saying, “Men who have sex with other men, or those who have multiple sexual partners, should be especially vigilant.”

Madrid authorities have been working on tracing the cases mainly from a single outbreak in a gay bathhouse, regional health chief Enrique Ruiz Escudero told reporters on Friday.

Men having sex with men and dogs?

We have learned that the festival also encouraged men to have sex with animals during the show. Darklands 2022 hosted a sick and twisted camp called CAMP K9, for men who like having sex with dogs. They also hosted a so-called “Horse Fair” for people with animal sex fetishes.

Bill Gates does it again?

The influential global security organization known as the Nuclear Threat Initiative, which is linked to Bill Gates, published a wargame document in March 2021 that specifically predicted a monkeypox outbreak in May 2022.

“In March 2021, NTI partnered with the Munich Security Conference to conduct a tabletop exercise on reducing high-consequence biological threats,” the conference paper read. “The exercise examined gaps in national and international biosecurity and pandemic preparedness architectures—exploring opportunities to improve prevention and response capabilities for high-consequence biological events. This report summarizes the exercise scenario, key findings from the discussion, and actionable recommendations for the international community.”

“Developed in consultation with technical and policy experts, the exercise scenario portrayed a deadly, global pandemic involving an unusual strain of monkeypox virus that first emerges in the fictional country of Brinia and eventually spreads globally,” the document states. “Later in the exercise, the scenario reveals that the initial outbreak was caused by a terrorist attack using a pathogen engineered in a laboratory with inadequate biosafety and biosecurity provisions and weak oversight. The exercise scenario concludes with more than three billion cases and 270 million fatalities globally.”

“As part of the scenario development process, NTI conducted a virtual consultation with experts in December 2020,” NTI adds.

The monkeypox outbreak coincides with an aggressive push for the World Health Organization to get vast new powers, including the authority to unilaterally declare “pandemics” that would compel signatories to enact measures, including vaccine mandates.

It’s like a bad Hollywood movie, that keeps playing on repeat. Along with the usual characters, Gates, Fauci and the WHO being all wrapped up in this, it seems the infamous Wuhan lab that some say was the souce of COVID-19 is yet again involved in another possible leak.

According to National Pulse, the Wuhan Institute of Virology assembled a monkeypox virus genome, allowing the virus to be identified through PCR tests, using a method researchers flagged for potentially creating a “contagious pathogen.”

The study was first published in February 2022, just months before the latest international outbreak of monkeypox cases started to appear in the gay community.

The paper, which was authored by nine Wuhan Institute of Virology researchers and published in the lab’s quarterly scientific journal Virologica Sinica, also follows the wide-scale use of Polymerase Chain Reaction (PCR) tests to identify COVID-19-positive individuals.

Researchers appeared to identify a portion of the monkeypox virus genome, enabling PCR tests to identify the virus, in the paper: “Efficient Assembly of a Large Fragment of Monkeypox Virus Genome as a qPCR Template Using Dual-Selection Based Transformation-Associated Recombination.”

GAYPOX: UK health clinics admit this is being spread in gay sex communities only!

In the UK, clinics are shutting their doors as gay STD clinics have started admitting this is happening exclusively in the gay community.

Monkeypox is affecting MSM in London.
JHC is running at reduced capacity.
Please don’t walk in without calling us first. 0203 315 4040
For more info check out the @56deanstreet info on the link in their tweet https://t.co/xSHg4DxmYK

📣 As of today 16/05/2022 Walk in clinics are temporarily closed at all Sexual Health Hounslow sites until further notice. We apologise for the inconvenience caused. We will be running appointment clinics instead of walk in. Please call us on 02083215718 or 02086303295

How to Use Compound Bow Sights + 5 Great Beginner Tips!