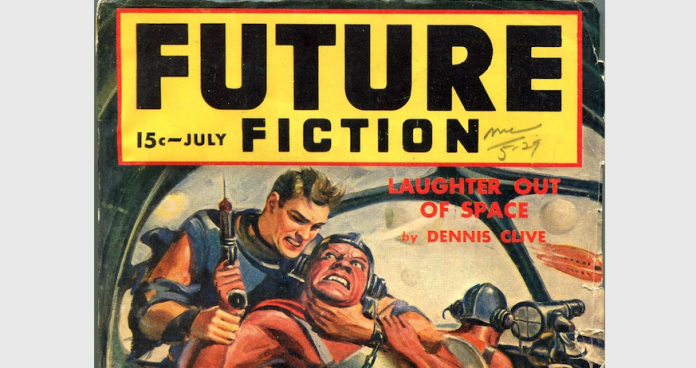 Some SurvivalBlog readers might think that science fiction is just starships, aliens, and directed-energy weapons. Not all science fiction is created equal, but the best of science fiction provides important commentary on society as it is now, or as it could be given the invention of certain technological devices. There is also a genre of science fiction called alternate history, which attempts to depict what life would be like if certain historical events had turned out differently, or if certain famous people had been removed from the scene before the activities that made them famous. (For example, imagine how different history would have been if Corporal Adolf Hitler had been one of the millions killed during World War I.) It is for this reason that science fiction was once called speculative fiction.

This essay highlights some science fiction short stories, novels, television shows, and movies that provide some hints about prepping and some commentary on what our country and Earth in general have become, and what we can do to prepare ourselves and possibly even to reverse some of the damage. If I missed your favorite example of science fiction, I’m sorry; I wish I had time for everything out there.

Much science fiction attempts to describe politics of the future. The themes are tyranny (religious or secular), war, chaos, or a benign, democratic world government. This last is the cornerstone presumption of Star Trek in its various forms: there might be war and despotism and anarchy out there in the galaxy, but Earth is peaceful and united. If anyone thinks that is likely to happen anytime soon, I’ll sell you some oceanfront property in Arizona.

Sadly, despotism, war, or anarchy seem to be more likely here on Earth. One good candidate here is Robert Heinlein’s Friday. Friday depicts a future in which the United States has disintegrated into several smaller countries: Vegas Free State, the Atlantic Union, the Chicago Imperium, the Lone Star Republic, and the California Confederacy. The heroine is a genetically engineered woman who works for a shadowy corporation. Robert Heinlein coined the term “corporate states” and noted that these would be more powerful than many territorial states (the modern nation-state). I’d say he hit the nail on the head: Amazon, Google, Twitter, Apple, and Facebook (Meta), as well as industry leaders in finance and energy, among others, all command a great deal of revenue and power. Facebook even attempted to start its own currency, and backed down only in the face of united opposition from the territorial states. Friday contains a hilarious parody of California politics.

Another book that describes corporate domination is The Space Merchants. In this book, the President of the United States is a figurehead who receives orders from Congress, whose members are appointed to represent corporations and who are apportioned votes depending on how large their corporate sponsors are. “The Chair recognizes the gentleman from Yummy-Cola…” Corporations openly fight each other in the streets to win contracts. Regular individuals are known as “consumers” and are subject to various dirty tricks like coffee made more addictive by various chemical additives and individualized advertisements projected directly on their retinas. Make no mistake – corporations would do this in a minute if their leaders thought they could get away with it.

One of Robert Heinlein’s all-time controversial classics is Starship Troopers. The book depicted the rise of crime and anarchy and the collapse of “unlimited democracies” because of the popular emphasis on individual rights without individual responsibilities, and the tendency of voters to vote for anything packaged nicely without any thought as to the consequences. Sound familiar? Heinlein’s solution was that only those who are willing to risk their lives for the state should be allowed to have any influence over the state. Hence, the only people allowed to vote or hold office in the Terran Federation (Earth and its colonies) are honorably discharged veterans of the Federation’s Army and (spacegoing) Navy or of certain other jobs designated as Federal Service. Robert Heinlein served in the U.S. Navy before being discharged for tuberculosis. Read the book; don’t watch the trashy movie.

War, whether civil war or international, is a frequent theme in science fiction. As Reginald Bretnor wryly noted in the introduction to The Future at War series, one of the best-selling movies of all time was not named “Star Peace”. The late Jerry Pournelle edited a ten-volume series entitled There Will Be War, which has various fiction and non-fiction essays. For science-fiction parody, you can’t beat “Unlimited Warfare,” which shamelessly uses stereotypes about the British and the French to depict a war for economic domination. Volume IX of this series also features “Fear and Survival” by Reginald Bretnor, which called for restructuring the U.S. military along the lines of the Swiss military, with more emphasis on preparing citizens as a whole, as well as more emphasis on the National Guard and the various state guards/state defense forces and less on the elite volunteer regular forces that the United States primarily uses. Here’s a similar article. For more on the Swiss military, try La Place de la Concorde Suisse (title in French, text in English) by John McPhee.

Alien invasion is another major science fiction theme. I’m sure SurvivalBlog readers have noticed an increase in news stories about this lately. There was a recent Congressional committee – and this after UFO studies have been taboo for decades. Some say this is to distract the public from government and corporate shenanigans. While I agree that there is no lack of government and corporate shenanigans these days, the galaxy is very big, and it is possible that there are other technical civilizations out there. Work is being done here on Earth to develop faster-than-light propulsion: here and here. Furthermore, humanity is much more visible now than in times past: radio waves are constantly emanating from Earth, there are hundreds of satellites in orbit, and the Voyager and Pioneer probes are leaving the Solar System. Nuclear weapons use can be monitored from orbit; perhaps improved sensors would be able to detect them farther away – say, from an alien probe hidden in the Asteroid Belt.

I think that if an alien invasion occurred, we would be lucky if it ended like in Independence Day, where the remaining military forces of every nation work together under U.S. leadership to destroy the alien starships after hacking their computers. Instead, I think it would be more like Harry Turtledove’s eight-book Worldwar series, in which the various nations of Earth fight with limited cooperation against the aliens, or try to work with the aliens to stick it to their enemies on Earth. (Fun spoiler: in the Worldwar series, powdered ginger has the same effect on the aliens as cocaine on humans.) For example, it would be very easy to imagine Iran, China, Russia, North Korea, or maybe Mexico working with invading aliens to stick it to the United States. We could expect the same things in an alien invasion as in a major war against Russia or China: targeting of military bases, large cities, power plants, space launch facilities, communications facilities, etc. President Reagan briefly mentioned the possibility of alien invasion in his speech to the United Nations on September 21, 1987. (Start listening at 29:00 of the clip.)

The U.S. Space Force may have been established with an eye toward deterring hostile nations on Earth, but perhaps some plans are quietly being made to handle alien contact, whether benign or hostile. If I was the commanding general of the Space Force, I certainly would!

Alternatively, if aliens truly wished to take over Earth, they might not bother with open fighting; biological warfare might be easier for them. Alice (Raccona) Sheldon’s short story “The Screwfly Solution” illustrates how this might be done. It was turned into a movie.

One of the villain species from Star Trek: The Next Generation is the Borg, a cybernetic (cyborg) mix of computers and human or aliens who have been “assimilated” by injection of nanites (microscopic robots). Anyone who has been assimilated lacks individuality; he is just a puppet of the Borg hive mind. The Matrix movies have a similar scenario; the vast majority of people are tied into a planetary computer system and live in a virtual world. Only the “red-pilled” live in reality.

We’re not there yet. But it can be said that social media has become an early hive mind. It’s so easy to conjure up outrage on social media and to get many people to think the same thing, or even to stir up a violent mob. Governments use social media to curry favor with their own citizens and to stir up trouble in other countries. Many people spend lots of time on social media. Social media is more insidious than television because it is interactive. Social media platforms use psychological techniques to ensnare users. The next step will be a neural implant such as Neuralink, or others, such as the Braincap featured in Arthur C. Clarke’s 3001: The Final Odyssey. Yes, Neuralink is being sold as a way to help the paralyzed live a normal life. But think how it could be abused. (Give those darn American nationalists/conservatives a Neuralink or Braincap which keeps them from thinking for themselves! The wokesters get the ideology they want, and Big Tech gets richer.)

In Star Trek: The Next Generation and Star Trek: First Contact, the Borg come from another planet to take over Earth and the Federation. Now we must consider the possibility that something similar will arise here on Earth.

What can we do? Depends on what we’re concerned about. If we’re worried about corporate domination, start with JWR’s advice: Don’t feed the beast. It’s not just Amazon; let’s all try our best to reduce our use of major corporations. At this point, it would be difficult to reduce corporate interaction all the way to zero, but it never hurts to do what we can. Let’s vote with our rapidly inflating dollars, even if it’s more expensive. Speak out against corporate and political shenanigans. As JWR said, rights are like muscles: use ‘em or lose ‘em. Our Founders pledged their lives, their fortunes, and their sacred honor. Are we less than they?

With regard to war on Earth or civil unrest within the United States, I won’t go into any details, as that has been discussed by JWR and many other writers here at SurvivalBlog over the years. I would only add that being prepared for war, civil unrest, or natural disaster would also come in handy in the event of alien invasion. I also encourage SurvivalBlog readers to add science fiction to their reading and viewing lists. JWR’s reading and viewing list is a good place to start.

Suppressor Myth #3 – You Must Keep the Government Informed at All Times Regarding Where Your Suppressor is Located and You Can’t Leave Your...