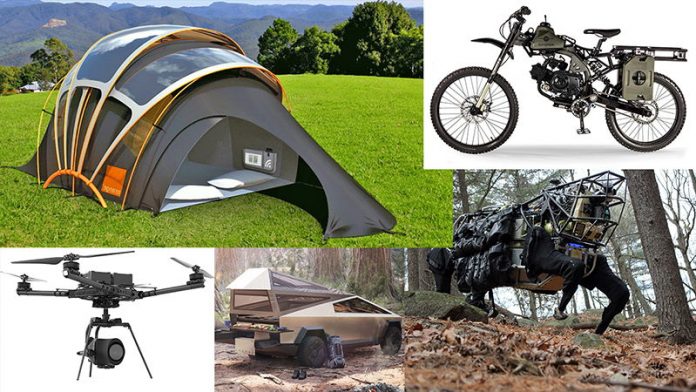 The 8 uncommon prepping supplies on this list aren’t prepping staples. As with everything in preparedness, each person’s wants and needs are different once you get past the basic preparedness supplies. This list is preparedness items and gear that you’ve never thought about, but they might make sense in your preparedness plans

As with most preppers, I can’t help but read these articles. Half my brain is telling me “Don’t do it! It’s a waste of time.” And the other half is saying “Yeah, but what if?” 9 out of 10 times I click the link. Sometimes these articles remind us what supplies we need to restock, but most of the time it’s just reassurance that were on the right track with preparedness.

Rather than talk about the same basic prepping gear and supplies that everyone else has been talking about since the beginning of prepping (myself included) I want to take a different approach. I put together a list of items you don’t hear about all the time, but they might make sense to include in your prepping plans.

A Minibike or motorized bikes are uncommon preparedness items and get passing mention in the preparedness community especially when it comes to EMP proof vehicles. The consensus in the prepping community is that a vehicle most likely to survive an EMP is a carbureted vehicle (pre 1980’s ish) with few electronics. It’s important to note however that opinions widely very on what, and how much vehicles will be affected by an EMP or CME.

With a 4 stroke engine and very little electronics a mini bike or motorized bike fits the “EMP Proof” mold perfectly. While a Minibike is fairly inexpensive (around $500) there are some expensive options like the Motoped Survival bike ($3500) or the Rokon that comes in at a whopping $9000.

Another cost friendly option is attaching an engine to your mountain bike. While this won’t give you the horsepower and fuel capacity a minibike would, it would be cool add to your preps regardless.

I’m on the fence when it comes to drones. They are a little creepy, and if I see one flying above my house, it’s probably getting shot down. On the other hand, as drone technology advances it has become more of a hobby for people rather than a tool for peeping toms.

From a prepper perspective I can see drones being especially useful. Similar to how the military uses drones they would be a great tool to have during and after a disaster or SHTF event. With a drone you would be able to do reconnaissance or scouting without having to put yourself in harms way. One drone could do the job of four or five people.

Drones range in price from around $100 to well over $1,000. I recently the Mavic Mini with the Fly More package and I love it. This is a smaller, lightweight, midlevel drone which makes it a perfect choice for preppers.

A Word of Caution: There is no need to spend $1,000 (or more) on a drone, but don’t get to cheap either, I know from experience. This is the third drone I have purchased because the first two were completely useless. The batteries lasted 5 minutes, and controlling the cheaper models is near impossible.

Water storage is possibly the hardest part of preparedness. When you multiply the duration of any disaster by your daily water needs, you can get an unrealistic number. If you don’t have an unlimited water source like a well, river or lake, water storage is (or should be) a concern.

Depending on your situation a backyard pond is a unique prepping item that could help with your water storage needs. While you can store some water in your home, your hot water heater has a few gallons, and even set up a water catchment system, a pond can add 50 or 100 more gallons.

While ponds need to be maintained, they don’t have the chemicals pools or hot tubs have in them, making the water easy to filter. The size of pond is up to you. I have a backyard pond that is about 60 gallons, but if you have the room the sky’s the limit.

This may be a little “futuristic” but as technology advances, I can see how a solar tent could be a useful prepping item. While most of us have our own version of a solar tent, the all in one package in the video below would just be cool.

Even without the tent, the solar panels themselves would be great to have. Hopefully in the near future there is a product similar to these that are collapsible and east to store.

Another one that is situation dependent is USB rechargeable batteries. While I don’t suggest having all the batteries you have stored be USB rechargeable, having some of these in your preparedness supplies just makes sense.

I can envision many different prepping scenarios where having some rechargeable batteries with a USB post could be beneficial. The two main uses I see are bug out bags, and around the home in some sort of grid down situation.

We should all have normal rechargeable lithium-ion batteries as well as a battery charger. Also having a few AA, AAA or 9Volt batteries that can be easily charged via USB port expands your options. These can be plugged directly into a portable solar panel making them ideal for bug out bags and power outages.

I’ll be honest, I didn’t even know these emergency lightbulbs existed a few months ago, but they are a Great addition to these uncommon prepping supplies. What makes these lightbulbs unique is that take a flashlight and a lightbulb and combine them.

They can be plugged into a lamp and used as a normal lightbulb when everything is normal, but when the power goes out, they switch to battery power. This means no searching around in the dark looking for that flashlight that you can’t remember where you put. They also have an adaptor that you can connect that turns them into a flashlight.

The only downside of these E Bulbs is that they are emergency use, and not really affective in a long-term power outage situation. Having a few of these E bulbs around is a good idea though, If everything goes dark, they give you the ability to pull out your lights out kit and get everything in order.

I will be doing a review of these E bulbs in the near future, but for now you can get more information from the Boundary website, or have a look at the reviews on the other options at Amazon.

This is one that some people agree with and some people adamantly oppose. To be honest, I see both sides of the argument. With rising fuel prices, a hybrid vehicle could save you money, but the downside is that EVERYTHING is electric.

With the push for green energy, I can see electric cars becoming more common than the combustion engine in the near future. I’m not giving up my gas guzzler just yet (maybe for this Tesla Cyber Truck), but I can see our government making gas fueled cars so expansive to own that we don’t have a choice.

What makes these hybrid electric cars a good prepping item? The first thing that comes to mind for me is money. The money you save on fuel can be used in other areas of preparedness. There is also the money we spend on maintenance on each year like oil changes, spark plugs, belts and hoses etc..

In a bug out situation or a long-term disaster scenario, these could also be useful if you have a way to charge them. In a long-term grid down scenario your fuel storage is bound to run out, and then what? A solar powered battery bank would give you an unlimited amount of “fuel” for your car.

Again, I’m on the fence with this one, but it may be something that becomes inevitable in the future. That is, if we make it that far with nothing major happening. I’m not holding my breath.

This may be a pipe dream, but man this would be cool. Could you imaging having a horse that you didn’t have to feed or clean up after? Unfortunately, at this point there is no civilian option of the Pack Mule, but as technology advances there is bound to be something similar to this.

Another downside to this and all robot technology is I can’t help but think about the movie iRobot. It’s possible I’m overreacting, but with quantum computing and computers that can learn, it has me thinking what if. It’s possible I’ve watched too many dystopian sci-fi movies as well.

If you have any ideas that some people might consider strange or odd prepping supplies leave a comment below. Or if you have anything to add to the prepping items on this list let me know?