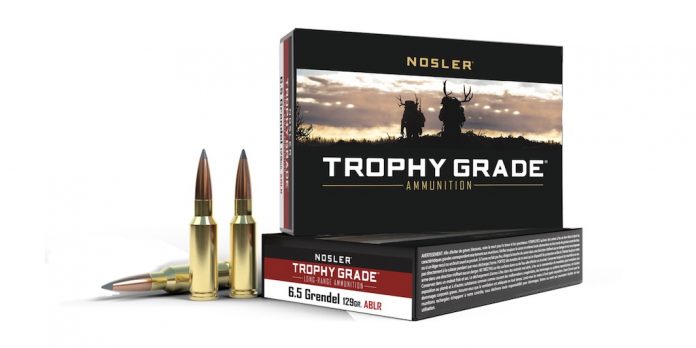 The 6.5 Grendel is a very efficient, sweet shooting, and accurate cartridge. Indeed, many hunters use the 6.5 Grendel for hunting deer, feral hogs, and other big game with excellent results. Here are a few great brands of 6.5 Grendel ammo that will probably serve you very well next time you’re afield.

Released in 2002, the 6.5 Grendel cartridge provides a big improvement over the 223 Remington cartridge with the added benefit of still fitting in an AR-15 platform. Not surprisingly, the cartridge is now fairly popular and many companies like Barnes, Federal Premium, Hornady, and Nosler produce several different variants of 6.5 Grendel ammo for hunting deer, feral hogs, and other big game animals.

Originally designed by Bill Alexander of Alexander Arms, the cartridge functions really well in AR-15 rifles and is capable of pushing a .264″ 120-grain bullet at 2,600 feet per second (1,801 ft-lbs of energy).

The 6.5 Grendel is a significantly more powerful cartridge than the .223 Remington, but has less recoil than bigger bore alternatives like the 450 Bushmaster. The 6.5 Grendel is also extremely versatile and works extremely well for long range shooting, tactical, law enforcement, varmint hunting, and big game hunting applications.

The 6.5 Grendel is an outstanding choice for deer hunting, even at surprisingly long distances (400 yards or so). It will also potentially work on bigger game like elk, though I think it’s too light for game that size. Just be sure to use appropriate ammunition (which we’ll get to shortly) and keep your ranges short if you want to use the 6.5 Grendel for hunting elk or black bear.

While 6.5 Grendel ammo is fairly common, most of that stuff is steel cased, full metal jacket (FMJ) ammo from companies like Wolf. Likewise, while they are very accurate and are certainly capable of killing big game animals, I don’t recommend using ammo lines like the Federal Gold Medal or Federal American Eagle.

The same goes for bullets like the Berger Hybrid Target, Hornady ELD Match, Lapua Scenar, and Sierra MatchKing or for open tip match (OTM) and boat tailed hollow point (BTHP) style bullets in general. Hornady Black ammo can be great hunting ammunition in other cartridges, but the 6.5 Grendel loading uses 123 grain Hornady ELD Match bullets, which I do not recommend for use on game.

Fortunately, there are definitely much better choices for factory 6.5 Grendel hunting ammo from other manufacturers.

So, regardless of whether you’re using a bolt action Ruger American Predator, a Howa Mini, a variant of the AR-15, or one of the many other 6.5 Grendel rifles in production, there is pretty much guaranteed to be something for everyone on the list below of the best 6.5 Grendel ammunition for hunting.

In today’s post, I’m going to show you the best 6.5 Grendel ammo for hunting deer, feral hogs, and other big game and I’ll also go over the pros and cons of each individual load.

Note: some of the links below are affiliate links. This means I will earn a small commission (at no extra cost to you) if you make a purchase of rifle, handgun, rimfire, or shotgun ammunition through those links. This helps support the blog and allows me to continue to create free content that’s useful to hunters like yourself. Thanks for your support.

First up we have Hornady Custom 6.5 Grendel ammunition. This loading is probably the most popular choice of 6.5 Grendel hunting ammo currently available in the United States right now.

Loaded with a 123 grain Super Shock Tip (SST) bullet with a plastic tip, this ammunition is a great choice for those who want to use their 6.5 Grendel for deer hunting, especially if the hunter wants to use an AR platform or other semi-auto 6.5 Grendel rifle. Those SST bullets are great on thin-skinned game and this is my #1 recommended 6.5 Grendel ammo for hunting deer sized game.

The 6.5mm 123gr SST bullet is known for excellent accuracy, has a very high BC, and is also soft enough to expand really well at mild impact velocities. This particular load carries over 1,000 ft-lbs of energy out to 400 yards and will work great on pronghorn antelope, mule, blacktail deer, and whitetail deer at that range and closer. It’s also extremely effective on deer sized game (including feral hogs) at closer range.

This is probably the most popular load used by those who hunt elk with the 6.5 Grendel as well. It will definitely work on really large game if you don’t have anything better, but I do not recommend using Hornady Custom 6.5 Grendel ammo for hunting game like elk, moose, or black bear unless that’s all you have.

To be perfectly honest, I think the cartridge is a little light for use on really big game, especially at longer ranges. For those who insist on using the 6.5 Grendel for elk hunting, I think other loads I recommend later in this article are a better choice (like the Nosler AccuBond Long Range or the Barnes TTSX).

All things considered, this is great ammo on deer sized game and you can’t go wrong with Hornady Custom 6.5 Grendel ammo for deer hunting, especially with a modern sporting rifle. This stuff will also work well as defensive ammo and for hog hunting.

Barnes produces a single loading for the 6.5 Grendel using a 115gr TTSX bullet that is a fantastic option for those looking for great 6.5 Grendel ammo for elk hunting at shorter ranges. The same goes for game like black bear and deer sized game as well.

In fact, even though it uses lighter bullets, I’d say the 115 grain TTSX load from Barnes is right up there with that 129gr AccuBond Long Range load from Nosler in the running for the best 6.5 Grendel ammo for elk and bear hunting.

It will also still work really well on game like deer and feral hogs. I don’t think you can do any better than this Barnes ammunition if you want something that’s hard hitting at close range on all manner of game for the cartridge.

For those reasons, I think this Barnes 6.5 Grendel ammo is the best option for those who want to hunt the widest possible range of game with this cartridge.

In addition to being one of the most versatile loads for the cartridge, this ammunition is are also 100% copper, which makes it an ideal choice of 6.5 Grendel hunting ammunition for use in states like California that that don’t permit the use of lead bullets.

Nosler produces 6.5 Grendel ammo as part of their Trophy Grade line loaded with their AccuBond Long Range Bullets. The 129 grain AccuBond Long Range bullets used in this loading have a bonded core and are both the heaviest bullets and have the highest BC available in a factory load for the cartridge.

Basically, this load from Nosler will deliver similar performance to the Hornady Custom load previously mentioned, but with a slightly heavier, tougher, and more aerodynamic bullet with a higher ballistic coefficient.

Once again, I don’t recommend hunting elk with the 6.5 Grendel in general. However, I like using a heavier bullet on elk and I think particular load from Nosler is the best 6.5 Grendel ammo for elk hunting. Same goes for other species of bigger game like black bears and I think it’s a better option for really big game than the Hornady Custom load.

Nosler also produces 6.5 Grendel ammo as part of their Ballistic Tip line. This ammunition is loaded with 120 grain Ballistic Tip bullets, which are known for their accuracy and for their devastating terminal performance on thin-skinned game.

With that in mind, this is excellent ammunition for hunting just about any species of game you’d reasonably pursue with the 6.5 Grendel cartridge. Specifically, this is an excellent choice of 6.5 Grendel ammo for deer, pronghorn, and feral hog hunting.

It’s not new or fancy, but Federal Fusion ammunition with a 120gr bullet is also really good 6.5 Grendel ammo for deer hunting.

This particular load is from Federal’s Fusion MSR line, which is specifically designed to reliably function in Modern Sporting Rifles, to include those with a shorter barrel (it will work in bolt-action rifles in addition to semi-automatic rifles). For this reason, I think Fusion 6.5 Grendel ammo is another good choice for deer or feral hog hunting, especially in a modern sporting rifle.

“Peace be with you all that are in Christ Jesus. Amen.”