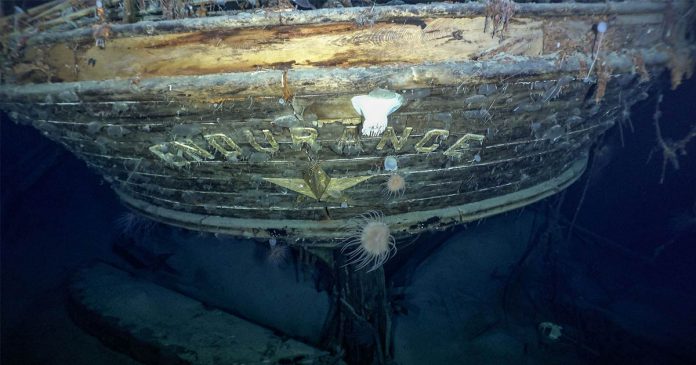 One of the greatest survival stories ever recorded has got to be the story of Ernest Shackleton’s Trans-Antarctic Expedition, and the loss of his ship the Endurance when it was crushed in pack ice and sank in 1915.

Today we learned that 107 years after the ship was lost to the sea, a group of explorers finally found the wreck off the coast of Antarctica. Endurance, a 144-foot, three-masted wooden ship, was discovered almost 10,000 feet below the surface of the Weddell Sea during a mission to find the wreck.

The discovery of the wreck was announced Wednesday in a statement by the search expedition, Endurance22.

“We have made polar history with the discovery of Endurance, and successfully completed the world’s most challenging shipwreck search,” said John Shears, the expedition’s leader.

Endurance was found at a depth of 3008 metres in the Weddell Sea, within the search area defined by the expedition team before its departure from Cape Town, and approximately four miles south of the position originally recorded by Captain Worsley.

“Our objectives for Endurance22 were to locate, survey and film the wreck, but also to conduct important scientific research, and to run an exceptional outreach programme.  Today’s celebrations are naturally tempered by world events, and everybody involved in Endurance22 keeps those affected by these continuing shocking events in their thoughts and prayers.

“The spotlight falls today on Mensun Bound, the Director of Exploration, and Nico Vincent, Subsea Project Manager. Under the outstanding leadership of Dr John Shears, they have found Endurance. But this success has been the result of impressive cooperation among many people, both on board the remarkable S.A. Agulhas II with its outstanding Master and crew, a skilled and committed expedition team and many on whose support we have depended in the UK, South Africa, Germany, France, the United States and elsewhere. The Trustees extend to them all our warmest thanks and congratulations on this historic achievement.”

Mensun Bound, Director of Exploration on the expedition, said:

“We are overwhelmed by our good fortune in having located and captured images of Endurance.  This is by far the finest wooden shipwreck I have ever seen. It is upright, well proud of the seabed, intact, and in a brilliant state of preservation.  You can even see “Endurance” arced across the stern, directly below the taffrail.  This is a milestone in polar history.  However, it is not all about the past; we are bringing the story of Shackleton and Endurance to new audiences, and to the next generation, who will be entrusted with the essential safeguarding of our polar regions and our planet.  We hope our discovery will engage young people and inspire them with the pioneering spirit, courage and fortitude of those who sailed Endurance to Antarctica.  We pay tribute to the navigational skills of Captain Frank Worsley, the Captain of the Endurance, whose detailed records were invaluable in our quest to locate the wreck.  I would like to thank my colleagues of The Falklands Maritime Heritage Trust for enabling this extraordinary expedition to take place, as well as Saab for their technology, and the whole team of dedicated experts who have been involved in this monumental discovery.”

Behold! #ENDURANCE The lost ship of Antarctic explorer Sir Ernest #Shackleton has been found on the floor of the Weddell Sea. After more than two weeks of searching, the @Endurance_22 project found the ship on Saturday. https://t.co/klujpcPGeH pic.twitter.com/XH2XFwDmHw

The Will to Survive: Ernest Shackleton and the Crew of the Endurance

In 1914, Arctic explorer Ernest Shackleton embarked on a journey to become the first man to cross the Antarctic continent on foot.

Shackleton left England aboard Endurance with a crew of 27 in 1914, bound for a bay on the Weddell Sea that was meant to be the starting point for an attempt by him and a small party to be the first to cross Antarctica.

His journey to cross the Arctic would never happen. Instead he would embark on one of the most remarkable stories of survival ever told. Shortly after leaving, Shackleton and his crew of 28 men became shipwrecked in one of the harshest environments in the world, the Antarctic Ice.

In early January 1915 Endurance became stuck less than 100 miles from its destination and drifted with the ice for more than 10 months as the ice slowly crushed it.