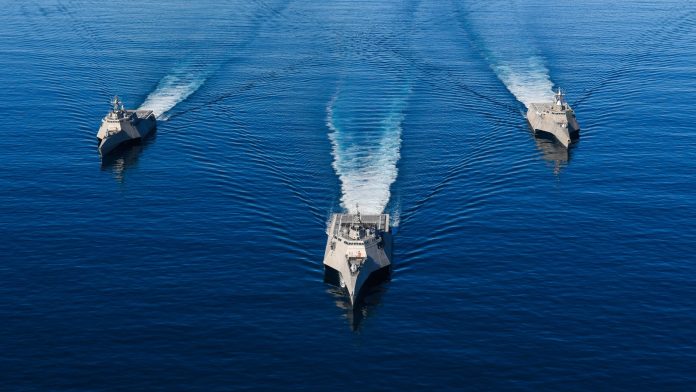 WASHINGTON: The US Navy has spent much of its time this budget cycle defending its choice to retire nine Littoral Combat Ships, and today the service’s top admiral floated another option that would keep the ships on active duty, just not for the US: Give them to allies and partners.

“There are countries in South America, as an example as you pointed out, that would be able to use these ships that have small crews and so instead of just considering scrapping as the single option, I think there are others that we can look at sir,” Chief of Naval Operations Adm. Michael Gilday said in response to a question from Sen. Jerry Moran, R-Kan., while testifying about the service’s fiscal year 2023 budget request to the Senate Appropriations Committee.

There is a variety of options the Navy has for what to do with a ship after it leaves the operational fleet, from taking it out of commission where it could be potentially recalled to service later, to selling the ships to foreign countries or partners or sending it to be scrapped for parts and raw materials.

Gilday’s suggestion to give or sell US ships to friendly nations is not new in and of itself, but it is the latest argument in a years-long, tense struggle by the Navy to push the LCS out of the US fleet over strenuous objections from lawmakers.

To date, the service’s main justifications for retiring LCS has been focused on the notion they simply won’t carry their weight in the next high-end fight. But then, there’s also the problems with the anti-submarine warfare mission modules that had to be canned. And lastly, the money not spent on the ships going forward can be reinvested into missile production.

But Rep. Elaine Luria, a Virginia democrat and former naval officer, for instance, told Breaking Defense in April that even if the LCS hasn’t met its original goals, it was still necessary.

“The LCS has not been a platform that has achieved its goal. We all know that,” Luria said then. “But it is a platform that can do low-end missions. So if you get rid of the LCS’s, what are you going to replace them [with]? Are you then going to need a DDG to go do every one of those ops, or are those ops not going to happen?”

Whether Gilday’s idea to offer the LCS to allies and partners in South America will hold any water with the larger senate committee, only time will tell. But for his part, Moran, who invited the admiral to discuss the idea further privately, appeared interested.

HEY, LOOK AT ME: Oregon Man Surrenders His Two-Gun Arsenal To Police After Uvalde Massacre