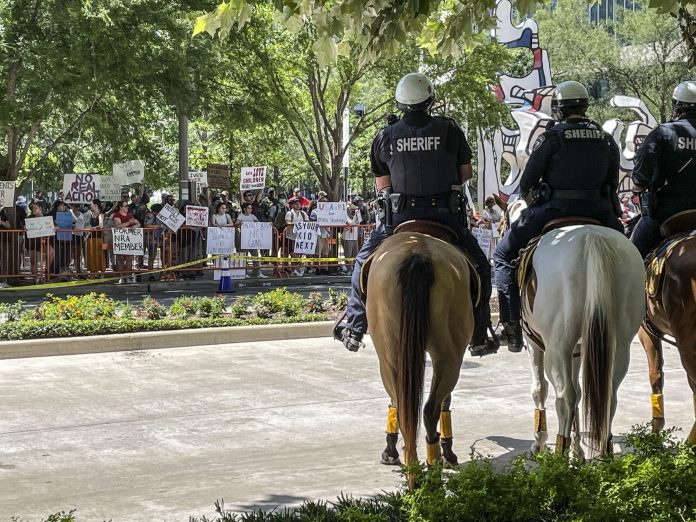 The story in Houston: turnout. Both the protesters outside the George R. Brown Convention Center where the NRA is holding it’s annual meeting and exhibits and the attendance inside on the convention floor and those bothering to sit in on the association’s annual meeting were far lighter today.

Outside, as with yesterday’s far larger crowd, police kept the protesters across the street from the convention center. The number who showed up to waive signs and chant slogans at NRA attendees today was down sharply. On the NRA side of the street, some of the attendees hung out behind police lines watching the spectacle aimed at them from the park.

The protesters mostly shouted obscenities and alternated between three chants:

Shame, shame, shame…
Hey, hey, NRA, how many kids did you kill today?
What do we want? GUN CONTROL! When do we want it? NOW!

As for shame, very few on the NRA side of the street appeared to feel any responsibility — and therefore no shame — for the horrific shooting in Uvalde that prompted the large-than-usual number of protesters at this year’s confab. The crowd on the east side of Avenida de las Americas was mostly bemused by those attempting to rain shame down on them from the park across the street. It’s safe to say that very few hearts or minds were changed by anything the protesters shouted are chanted.

Attendance at the NRA’s annual membership meeting was anemic at best…far less than in previous years. Only a few hundred people bothered to show up for this year’s tightly stage-managed, carefully choreographed ritual. Bringing out the NRA’s officers to the thundering beat of AC/DC’s Thunderstruck was both out of place and wholly ineffective at getting the sparse crowd pumped up. Those who were there were mostly true believers and applauded in all the right places. But those who’ve been to more than one of these things heard literally nothing new. At all.

Then a series of resolutions from the floor were dutifully proposed and voted on, including one supporting Wayne LaPierre himself. A number of the usual types, board members included, spoke in support of LaPierre and the resolution, including past president Marion Hammer. Some, however, rose to say that LaPierre has hurt the organization with the cascade of alleged mismanagement, malfeasance and scandal in recent years.

In the end, nothing of consequence happened, which is exactly as the NRA likes and intends it.

On the convention floor, the problem was how much of the floor could be seen.

In past years, the Saturday crowds were so thick that it’s it’s difficult to walk through the hall. That hasn’t been the case this year at all. Again, that’s due to a combination of factors including holding the event on Memorial Day weekend as well as the protests following Uvalde. You have to think that the sky-high cost of gasoline also had a negative effect on those deciding whether to travel to Houston this weekend.

We talked to a number of exhibitors who commented how light the crowd has been this year and how little booth traffic they’ve seen.

Those who are here, however, are doing what NRA attendees do, with no need to elbow others out of the way. In the end, based on an eyeball guesstimate, I’d have to say that this year’s attendance is roughly about half the usual crowd at NRAAMs of the past. That’s not good for an association beset by a range of challenges…legal, political, and financial.