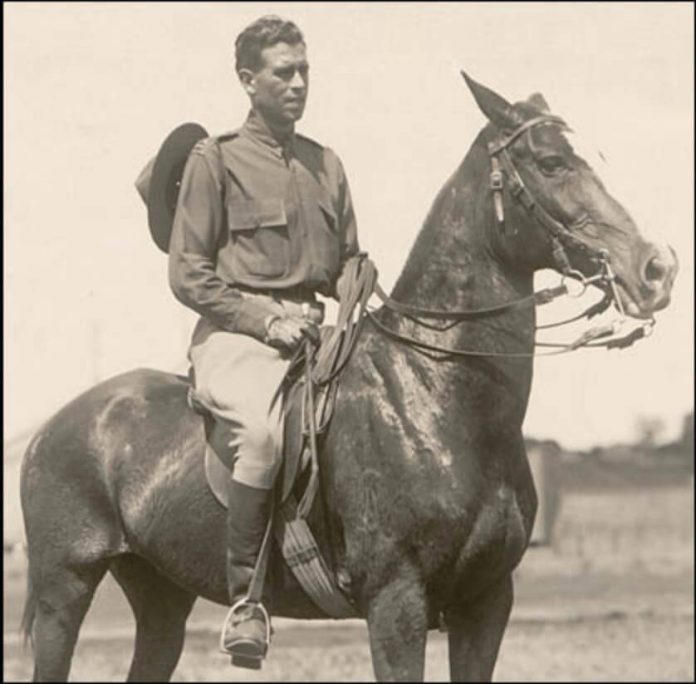 Maurice Rose was born in 1899 in Middletown, Connecticut, the son of Samuel and Katherin Rose. The son and grandson of rabbis from Poland, MG Rose was ultimately the highest-ranking Jewish officer in the United States Army. From the very beginning, Maurice Rose was a warrior.

Rose edited his high school paper and enjoyed a stellar academic career. In the yearbook published the year of his graduation a cartoon of the paper staff depicted him carrying a rifle. Soldiering was in his blood.

Rose lied about his age and enlisted in the Colorado National Guard hoping to participate in the Punitive Expedition against Pancho Villa. Six weeks later when his commander discovered that he was only sixteen he was discharged. Rose then worked in a meatpacking plant until he turned seventeen and could convince his parents to sign an enlistment waiver.

Once on active duty Maurice Rose’s natural leadership qualities became apparent. He was selected for officer training but had to illicitly alter his Army records to reflect a birthdate of 1895 so he would be old enough to be considered. In August of 1917 Rose graduated from the Officer Candidate Course at Fort Riley, Kansas. He was commissioned a Second Lieutenant just in time to deploy for World War 1.

By now a First Lieutenant, Rose’s battalion assumed defensive positions in the vicinity of Toul, France in 1918. Soon thereafter Rose and his comrades found themselves in the thick of the Meuse-Argonne Offensive. This ghastly 6-week operation ultimately claimed a quarter-million casualties on both sides. More than 26,000 Americans were killed.

Rose, for his part, was in the thick of it throughout. He caught a load of shrapnel from a German mortar and suffered a concussion from nearby artillery fire. He refused the medics’ orders to evacuate until he eventually collapsed from exhaustion and blood loss. After a few days in the hospital, Rose slipped away to rejoin his unit.

This tidy bit of subterfuge resulted in his parents being informed that he was killed in action, an error that took a few days to rectify. Rose eventually recovered and served with the occupation troops until the summer of 1919 when he was discharged.

Rose worked as a traveling salesman for a time but returned to the military in 1920, as soon as the Army would allow it. By now he was a Captain and served in a variety of operational and administrative positions. At some point, he altered his military records once again and claimed to be Protestant. Though some biographers attribute this to a religious conversion, more than likely he simply felt that no longer being Jewish would help his career.

By the onset of World War 2 Rose was a Major and a graduate of the Infantry and Cavalry Officer Courses as well as the Command and General Staff College. He was promoted to Lieutenant Colonel in short order. A preternaturally handsome man by the standards of the day, a newspaper reported described him in print as “probably the best looking man in the Army.”

In 1940 the US Army was a growth industry. The American military had to expand in an unprecedented fashion, and it needed experienced commissioned officers and NCOs desperately. By the time he saw combat in North Africa Rose was a full Colonel. He negotiated the surrender of German forces in Tunisia under Generalmajor Fritz Krause.

Operation Husky saw Rose promoted to Brigadier General during operations in Sicily. When the commander of the 3d Armored Division, MG Leroy Watson, was relieved in the summer of 1944 General Rose took his place and thrived.

The Character of the Man

MG Rose was known as an aggressive and effective combat commander. He once drove his jeep across a mined bridge to ensure it was safe for his men to follow. On another occasion, General Rose spotted a group of Germans running across a field and dove out of his jeep brandishing a Thompson submachine gun.

Along with his driver, his aide, his DivArty Commander, and a handy PFC this motley band promptly captured a full dozen German soldiers. The Division Commander subsequently marched his POWs back and turned them over to the MPs. Such antics endeared Rose to the troops in his command.

MG Rose indeed insisted on leading from the front but also eschewed the publicity, fame, and glory so many of his counterparts feasted upon. Unlike Generals like Patton, MacArthur, and Montgomery, Maurice Rose was satisfied to avoid the limelight and just do his job. This exceptional military ethic ultimately killed him.

Combat is a Chaotic Thing

On March 30, 1945, just over a month from the end of the war in Europe, MG Rose and his staff were traveling in jeeps at the head of a column of his 3d Armored Division near the city of Paderborn, Germany. The Germans were fighting on their home turf, and the situation was desperate. Armored units on both sides fought back and forth, creating a fluid, chaotic battlefield. When word reached Rose that certain of his units had been cut off by the Germans, he pressed forward to investigate.

Before they could react, Rose and the men of his armored vanguard began taking fire from German tanks, antitank guns, and small arms. The lead tank of his column was hit by an enemy tank round and destroyed. In response, Rose and his command team mounted their jeeps and attempted to flee cross-country.

The German tanks soon had the Americans outflanked, and they moved to seal off their escape. The lead jeep accelerated and narrowly avoided a Wehrmacht panzer to reach safety. MG Rose was in the second jeep and found himself cut off. The German Tiger pinned Rose’s jeep against a tree, forcing him to dismount.

While Allied troops had a tendency to describe all German tanks as Tigers, these were the real deal. Surviving American GIs identified the vehicles based upon their distinctive twin exhausts.

The German tank commander opened his hatch and emerged with an MP40 submachine gun. As the Wehrmacht soldier covered Rose and his small party, the American General reached for his sidearm. Whether or not MG Rose was attempting to surrender or intended to fight the German officer has been lost to history. The panzer commander leveled his 9mm SMG and shot Rose fourteen times in several bursts. The American General was dead where he fell.

The German MP40 began life as the MP38 designed by Heinrich Vollmer in, you guessed it, 1938. The MP38 was an evolutionary development of the previous MP36. Not more than a couple of MP36’s survived the war. The MP38 featured a machined steel receiver and bakelite furniture. It can be differentiated from the subsequent MP40 by the longitudinal ridges in the receiver and a small hole pressed into each side of the magazine well.

The MP40 was a very similar design and enjoys essentially complete parts interchangeability with the MP38. Both guns feature a novel but unnecessarily complicated telescoping recoil spring system that makes the guns exceptionally smooth in action. The MP40 was the first general-issue Infantry weapon truly optimized for mass production. Around a million copies rolled off the lines before it was supplanted by the MP44 assault rifle. The MP40 soldiered on until the very end of the war.

The MP40 in Action

I have a friend who was walking point with a buddy on a patrol through a German village in the final days of the war. Coming around a corner he and his pal came face to face with a German soldier armed with an MP40. The kraut soldier loosed a burst into the chest of my friend’s comrade. My buddy killed the German with a burst from his Thompson.

Both Americans retreated into a nearby building. The wounded American then leaned heavily against the wall, slid to the floor, and died. Even well into his nineties that remained a difficult story for my buddy to tell. At close range, the MP40 was a proven man-killer.

The victorious Allies undertook an investigation to determine if MG Rose’s death might constitute a war crime. He was the highest-ranking American soldier to be killed in action in Europe, and his Jewish heritage made the circumstances of his killing immediately suspect. However, the light was dim at the time, and when his body was recovered the following day his codebook and maps remained unmolested.

MG Rose was ultimately shot with four separate bursts from that German tank commander’s MP40. The first burst knocked Rose’s helmet off. Four rounds from the third burst struck him in the head and killed him. His helmet was recovered from a nearby ditch about ten feet away. The holes in the helmet resulted from its having been hit as it spun in the air behind the dying General.

The determination was simply that MG Rose tragically fell victim to the fog of war. German troops were frequently inexperienced and terrified at this late stage. That nameless Wehrmacht tank commander likely just saw Rose move for his pistol and fired reflexively. MG Maurice Rose, known to his men as “The Division Point” because of his penchant for leading from the front, was buried at the US military cemetery at Margraten, the Netherlands. 3d Armored Division commanders rendered honors at his grave until the early nineties when the division was disbanded.

Survivalist vs Prepper: Which One Are You?

Tungsten Super Shot is Changing the Game for Turkey Hunters