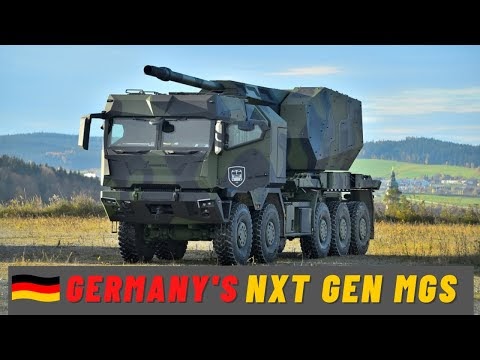 This is not how a competent land force (this may have been marines) sets up towed artillery nowadays (if it’s stupid enough to still use towed artillery at all). More about this soon in the blog. https://t.co/kfT1WdUhQc

A towed artillery firing unit used to be organised as a battery and set up as either a battery or half battery. Half batteries made sense; they supported the infantry like a battery using half as many artillery pieces, so the battery could leap frog; one half was always emplaced with guns ready to shoot and often times one half was not ready because of movement.

Batteries were often emplaced as seen in the videos, even as a long line. This made command & control easier. You might need to correct the aim of at leat some guns of such a linear battery, for else they would not aim at the same point.

See, the biggest issues with setting up an artillery piece is to know your position precisely (satellite navigation or measuring the angles towards multiple landmarks) and to know your orientation precisely (finding north – using landmarks or stars is better than a mere compass and map). You cannot accurately shoot at a coordinate if you don’t know where your gun is and what direction your barrel is pointing at.

This has become rather automated with the availability of satellite navigation since the 1990’s, and it’s since become state of the art to give such navigation ability not just to the battery or half-battery, but to each individual towed gun crew or self-propelled gun vehicle.

This permits to emplace the guns with a wide spacing of kilometres, distances where counterfires would not hit more than one gun and radio or cable communication is still easily possible within the entire battery.  Self-propelled guns might even be completely independent, having their own fire control (no more need for one or two fire direction centre vehicles per battery), navigation and presumably self-defence capability.

So you can protect a towed gun firing unit even when you don’t have the time for field fortifications to protect the guns (the hydraulic recoiling system is quite vulnerable to fragments, and the tires sure are as well) or at very least the crews (which didn’t have even only shallow trenches in the video).

What we see in the videos is a battery of 1960’s guns (actually very good ones back then, but badly outranged and thus very restricted in their possibilities today) in a hasty firing position that’s reminiscent of the 1700’s to 1980’s. This is a consequence of incompetence at the small unit and/or unit level. I mentioned that the use of landmarks and maps for position-finding and north-finding is doable without any electronics. It takes simple yet accurate mechanical tools (to determine horizontal angles between landmarks correctly) and good maps. Technically, artillery firing positions could already have had spacings of 300 m between individual guns in the 1920’s.

Furthermore, it’s possible to explosively excavate a foxhole on the quick (been around for a long time, can be improvised). Towed gun crews who had no time to dig for cover could prepare such foxhole excavator charges and set them off once they notice counterfires. Combine this with a DRFM jammer against radio frequency proximity fuses and the odds of survival are greatly increased even against MRSI counterattacks.

By the way, the aforementioned advance in the state of art is a good reason to give up the concept of a “battery”. Artillery firing vehicles should be self-propelled with a bulletproofed cabin and munition stowage, have a nearly 360° defensive gun (I would prefer a .338 machinegun) and be accompanied a second bulletproofed vehicle with the same armament (ideally a munitions resupply vehicle) for covering the dead angle in firing position (and especially if it’s a 4×4 car also as advance guard during movement). This small unit should move, secure itself and navigate independently one the battlefield. It would receive firing missions by radio datalink and the “battery” turns into a artillery firepower unit (such as a company), which is merely an administrative construct with little relevance on the battlefield. The independently moving firing small units of two (maximum three; 8×8 SPG, 8×8 resupply and 4×4 scout car) vehicles each would also have to report by datalink where from where they have fired shots, so others don’t drive into counterfires meant to hit another team.

A bit about hardware; we shouldn’t spend big on getting stored Panzerhaubitze 2000 back into service in Germany. They are a pain in the a** to move long distances on road and guzzle much fuel.

The Rheinmetall/MAN 10×10 HX3 with 155 mm L/52 AGM turret seems much better-suited (capable of long range self-deployment by road) and could easily be accompanied by another HX2 or HX3 series resupply vehicle.

(sorry for the stupid audio, that’s a stupid fashion from beyond the great pond)

In case that the AGM is so far commercially unsuccessful because its Panzerhaubitze 2000-derived autoloader doesn’t convince: The Swedish Archer on MAN HX2 series 8×8 vehicle is another option (easily transferred to HX3). Both AGM and Archer vastly outperform the wheeled 155 mm SPG competition in terms of burst fire capability.

edit: I should have mentioned Zuzana 2 as well: 6 rpm, 16 rounds in 3 minutes, MRSI 2…4 rds depending on range, autoloader and (very slow) backup manual loading, 360° traverse, 40 rounds stored on 8×8 vehicle that could use a German engine. I don’t know if the 360° traverse means 360° capable of shooting full charge in lower register. Videos show Zuzana 2 firing without even deploying its two hydraulic legs, but I don’t know how much propellant was involved in such shots. The advantages over Caesar 2 are the better crew protection and the certainly (even with caveat) greater traverse.

Zuzana 2 is supposedly cheaper than Caesar and Archer. AGM would be a fully domestic product, so about half of the price paid would return to the government through taxes. Its price should thus by understood t o be half of its nominal price, whatever that would be (I guess 10+ M € for the turret unless it’s a bulk order for 200+ pieces).

“Every act of a delegated authority, contrary to the…”