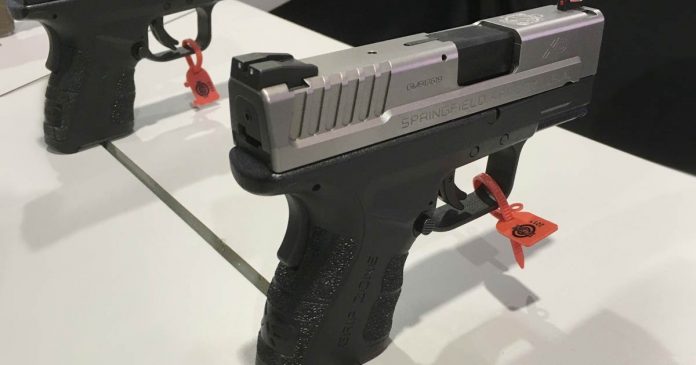 On Monday, Biden doubled down on his claims that the 2nd amendment isn’t absolute and targeted gun owners yet again, saying that the most popular caliber handgun – the 9MM – should be banned.

Appearing in front of reporters outside the Whitehouse, the senile old man once again repeated his bizarre, and completely false claims, that the second amendment prohibited our founders from owning cannons. Then, he attacked gun owners and said there was no reason that they should be able to own “high-caliber weapons” like a 9mm handgun.

Biden made up another bizarre story, where he says he once visited a trauma hospital in New York, where he said doctors had shown him X-rays of gunshot wounds caused by various firearms.

They said a .22-caliber bullet would lodge in the lung, and we can probably get it out — may be able to get it and save the life,” Biden said. “A 9mm bullet blows the lung out of the body. “So the idea of these high-caliber weapons is, uh, there’s simply no rational basis for it in terms of thinking about self-protection, hunting,” the president went on.

Biden’s attempt to go after the 9mm is nothing new. In fact, back in 2019, at a 2019 fundraiser in Seattle, for example, then-candidate Biden asked his audience: “Why should we allow people to have military-style weapons, including pistols with 9mm bullets and can hold ten or more rounds?”

Lies again about the 2nd amendment

“Biden’s statement is completely false,” said David Kopel, the research director and Second Amendment project director at the Independence Institute. “Neither in 1791 nor in the preceding centuries was there any American law against owning particular types of arms.”

Of course, she is full of shit, but as usual liberal morons eat this shit up and really believe that people can walk off the street into their local Bass Pro and buy the same weapons that the military uses – THEY CAN’T!