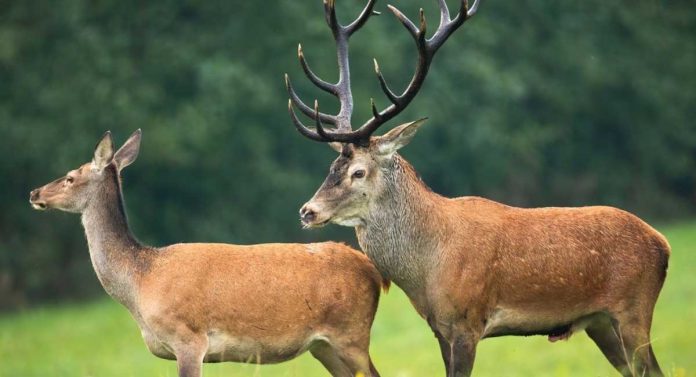 Deer are seasonal breeders, with males demonstrating “rut” behavior in the breeding season, but do deer mate for life?

This article aims to answer this question and discuss everything you need to know about these herd animals’ mating patterns.

The deer reproduction cycle is one of nature’s most exciting. Deer don’t mate for life, but rather only when the breeding season arrives, and with whatever available doe a buck can find. To understand the behavior patterns of deer throughout the year, it’s pertinent to know the physiology behind deer reproduction.

Seasonality has significant implications on deer reproduction. The seasonal changes such as rainfall, temperature, and length of days play a crucial role in determining the arrival of their mating season.

The breeding processes of buck (male deer) and doe (female deer) are different. The bucks go through a highly chaotic and intense phase where they’re in breeding wars with other bucks for the doe they choose. It’s been observed that their behavior changes in the rutting period.

Here’s a brief overview of rutting and the behavioral patterns of bucks during this period:

In deer nomenclature, rut refers to the mating period wherein all the activities are associated with the breeding season. Usually, rut takes place from October to December, depending on the stealth and build of bucks.

Sparring is the behavior that first indicates rutting among bucks. Sparring is a low force, short match between two equally-sized bucks that involves pushing and shoving. This behavior helps to establish the dominance hierarchy. As the breeding season peaks, this sparring converts into a full-blown match to acquire breeding rights over the female deer.

The rubbing behavior occurs after the velvet shedding or drying and continues throughout the rutting period. The bucks rub their forehead and antlers on trees to mark their territory and intimidate other bucks.

This is often used for scent disposition and as a communication signpost. Rubbing is often seen as a symbol of dominance and an act of aggression once the testosterone reaches its peak.

This behavior is often used as a visual and olfactory sign to establish a presence. After the first rub appears, bucks start to make scrapes. A buck will break a low branch of a tree by biting and pulling, depositing its scent from its forehead and nose in the process.

A scrape is made after breaking a branch when a buck hoofs the ground and then urinates in the exposed soil.

Seasonal Breeding in Does

Does (female deer) are short breeders, meaning they come in estrus between October and December. Several behavioral signs indicate that a doe is ready to mate:

Estrus and the Behavioral Signs

Also known as Oestrus, estrus is a period in the sexual cycle of does when they’re in heat. The word heat refers to when a female deer is ready to mate with a buck.

The bucks can often sense when a doe is in heat through their smell. This is because does release specific pheromones during this cycle. These pheromones also affect the mood of does along with their sexuality.

Here are a few signs which indicate the doe is in estrus:

In estrus, the does become restless and move often. This could be an effort to find eligible bucks.

Mostly, does have their tails relaxed in a downward hang. When the tail is parallel to the ground or straight up, it’s an indication to males that a female is ready to breed.

In estrous, the does urinate frequently, and sometimes every few minutes. This will alert any nearby bucks of a doe in their presence.

During estrous, does will avoid other deer. Therefore, you’ll find bedding in places where many deer don’t usually bed. This can make it easier for a buck to find a female in heat.

Breeding in Different Species of Deer

Different deer have different breeding times. Here’s a rundown of a few deer species and their patterns:

Predominantly found in the U.S, White-tailed deer are a short-day breeder and polyestrous, meaning the does can be in heat more than once a year. The mating season lasts from October to December or sometimes until January in southern regions. The bucks develop antlers and battle with other bucks for mating rights.

Found in the western region of the U.S., Mule Deer are also short-day breeders and polyestrous, with the peak mating season in November and December. The bucks grow antlers before the breeding seasons.

Once the buck finds his doe, the chasing game begins before they finally mate and stay together for several days. The gestation period is 7 months, and the female deer gives birth to a single fawn for the first year and twins in the following years.

Fallow Deer are found across European regions, minor Asia, and the U.S. (Texas). The mating period begins in October. Males usually mark a specific territory in which no other buck can enter.

The female joins this territory, staying until mating begins. After the mating season, the males abandon this territory and join their male groups.

Bucks may exhibit multiple patterns during the same mating seasons. Recent studies have demonstrated the same behavioral patterns in does wherein they have different mating partners. This makes deer polygamous creatures.

“Gun ownership is an act of personal responsibility.”