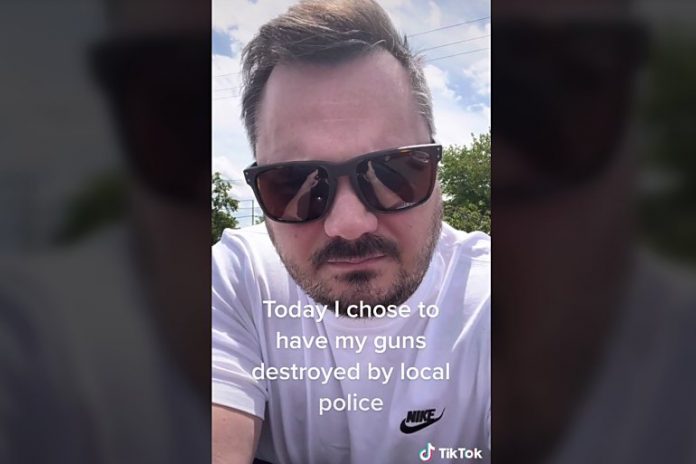 We all thought that Florida Man sets the hightest bar for head-scratching moments. Now an Oregon man by the name of Ben Beers rolled his only ace in the game of conspicuous virtue signaling to step up and challenge Florida Man to hold his beer(s).

Mr. Beers’ claim to fame: he has publicized his act of contrition in surrendering his AR-15 rifle and a 9mm pistol to the Hillsboro, Oregon police department for destruction as a result of the Uvalde school massacre.

Of course, he didn’t surrender those guns for altruistic reasons or he wouldn’t have taken the time put up a TikTok video to celebrate the sacrifice he’s making for the greater good.

Instead this was a “Look at me!” move clearly made in an attempt to snag fifteen seconds of fame.

In Beers’ video, he made all manner of assertions as to why he literally gave away his safety rescue tools. The local media, of course, ate it up with a spoon. And then Yahoo News picked up the story and posted it here…

A father of two in Oregon said he gave his guns to his local police department to be destroyed after the recent shooting in Uvalde, Texas that claimed the lives of 19 children and two teachers.

In a widely-viewed TikTok video, Ben Beers said he was turning over his two guns — a 9 mm handgun and an AR-15 — to the Hillsboro Police Department because he doesn’t want them anymore.

“I know this will not change legislation, or anything to do with gun culture in America, but hopefully it’ll be a form of symbolism,” Beers said in the video. “Hopefully America can wake up, because no other country has the problems that we do with gun culture, ideation, and gun violence like we do.”

No other country has the problems we do with gun culture and gun violence?

Maybe Beers was reading the junk science paper by Adam Lankford (2016), oft-quoted by the mainstream media, that the US has the lion’s share of mass public shootings world-wide.  Since publishing his “work,” Lankford has not only refused to share his data with other researchers to allow them to attempt to replicate his findings and test his hypothesis, he’s also unwilling to even discuss defending his results with his peers.

Researcher John Lott investigated Lankford’s research and found it…problematic. So much so that Lott wrote a paper debunking Lankford’s so-called “research.” Unlike Lankford, Lott made his data sets public.

A paper on mass public shootings by Adam Lankford (2016) has received massive national and international media attention, getting coverage in the New York Times, the Wall Street Journal, plus hundreds of other news outlets spanning at least 35 different countries. Lankford’s claim was that over the 47 years from 1966 to 2012, an enormous amount of the world’s mass public shooters — 31% — occurred in the United States. Lankford attributed this to America’s gun ownership.

Lankford claims to have “complete” data on such shooters in 171 countries. However, because he has neither identified the cases nor their location nor even a complete description on how he put the cases together, it is impossible to replicate his findings.

It is particularly important that Lankford share his data because of the extreme difficulty in finding mass shooting cases in remote parts of the world going back to 1966. Lack of media coverage could easily lead to under-counting of foreign mass shootings, which would falsely lead to the conclusion that the U.S. has such a large share.

Lankford’s study reported that from 1966 to 2012, there were 90 public mass shooters in the United States and 202 in the rest of world. We find that Lankford’s data represent a gross undercount of foreign attacks. Our list contains 1,448 attacks and at least 3,081 shooters outside the United States over just the last 15 years of the period that Lankford examined. We find at least fifteen times more mass public shooters than Lankford in less than a third the number of years.

Even when we use coding choices that are most charitable to Lankford, his 31 percent estimate of the US’s share of world mass public shooters is cut by over 95 percent.  By our count, the US makes up less than 1.43% of the mass public shooters, 2.11% of their murders, and 2.88% of their attacks. All these are much less than the US’s 4.6% share of the world population. Attacks in the US are not only less frequent than other countries, they are also much less deadly on average.

Given the massive U.S. and international media attention Lankford’s work has received, and given the considerable impact his research has had on the debate, it is critical that this issue be resolved. His unwillingness to provide even the most basic information to other researchers raises real concerns about Lankford’s motives.

Remember, another recent study by the RAND Corporation found that virtually all (27777 of 27900) gun control “studies” were badly flawed and didn’t follow rigorous, well-established scientific standards. So much so, in fact, that using these to support claims that gun control actually prevents criminal misuse of guns is less scientifically accurate than claiming drinking milk causes car accidents.

So Ben Beers has turned in his two guns for virtue-signaling fame. Unfortunately him and his family, he didi it based on a false premise and now lacks the most effective way for his wife and him to defend their family from violent criminals.

Ultimate Guide to the Best Smokers (Beginner and Pro Options)

From shipyards to semiconductors, watchdog warns of Defense Industrial Base risks

SilencerCo Giving Away a Suppressor Each Day at 2022 NRAAM