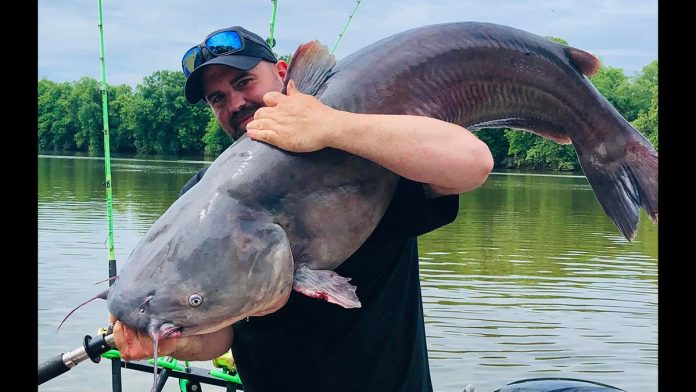 Angler Steven Price, of Lancaster, Ohio, shattered the West Virginia blue catfish state record with a 67.22-pound fish on Wednesday. With his catch, he topped a record that was set just 8 weeks ago.

An avid catfisherman for years, Price has recently focused his efforts on fishing the Ohio, Tennessee, and James Rivers. He generally fishes with buddies and most often with longtime catfishing partner Marcus MacDonald, but on the morning of May 25, he decided to enjoy a solo trip on the Kanawha, an Ohio River tributary, with his Labrador retriever, Daisy. “I wanted to go by myself to get away and just enjoy the quiet,” Price tells Field & Stream. “It was the first time I’ve ever even done that on the river.”

Price was using cut shad for bait. His first fish of the day felt like a monster flathead, but the fish broke his line on a snag. Price was feeling down. “I made a phone call to Marcus and told him what happened, and how I was a little bummed out,” he says. “But I said, ‘Okay, before I move to the next spot, I’m gonna re-rig these rods and give it another 15 minutes.’ I put my rods back out and pretty soon one bent. As soon as I picked it up, I could tell it was another really big fish.”

Just minutes after losing one monster, Price had another one in the boat—a 56-pound blue cat, a new personal best. After taking a photo, Price returned the blue to the water and again started dialing his buddies, telling everybody about his good fortune. He was talking to one friend when another rod dipped. “I pick it up, and I’m instantly fighting it,” Price says. “It’s another big one. Now, this doesn’t even seem real anymore. This is one of those days everybody dreams of happening.”

He was pretty sure he had a blue catfish on because the fish was swimming toward the surface, unlike flatheads, which tend to dig toward the bottom when hooked. He saw the water boil up behind the boat and caught a glimpse of the fish’s tail. It was big—and he thought it could be even bigger than his first one.

Price had to navigate eight lines in the water while fighting the brute. “The fish cut across four lines,” he says. “Typically, I’ve got a partner there to help but not this time. I had to weave under all these rods by myself while holding onto the fish. I finally got him close to the boat, and I looked back for the net.”

That’s when price realized he hadn’t reattached the handle to the net after removing it to weigh the 56-pound blue. “So, I was sitting there holding onto this fish with one arm and reaching back to assemble the net with the other,” Price recalls, laughing. Eventually, he was able to put the net back together and maneuver the catfish’s tail into it. He caught a break when the big blue flipped backward while trying to escape and inadvertently swam headfirst into the net. As Price tried to lift it into the boat, he says “The reality sank in that I had an absolute monster. I struggled to get him over the side and onto the deck.”

Price’s on-boat scale showed over 70 pounds, including the net. Price again started making calls. He was able to locate a local fisherman, Todd Anderson, who had an 80-gallon live well with an oxygen tank in his boat. He also made contact with Ryan Bosserman, a fisheries biologist for the West Virginia Department of Natural Resources (WVDNR). Bosserman set out immediately to meet Price at the Leon boat ramp, while Anderson drove to the river, put his boat in, and drove 15 miles upriver to meet Price and transfer the catfish to his live well. In the meantime, Price had secured his net to the side of the boat and was drifting downriver with the fish in the net, stopping now and then to fire up his motor briefly in order to speed up his progress.

“It’s fantastic that the biologist and everybody could get out there so fast,” Price says. “One of the most important things to me was making sure the fish stayed alive. From the time I caught him to when we released him was around an hour, and he was in the water most of that time. He kicked like a mule and swam off real strong on the release. If someone had hooked him after that, they’d have had another fight on their hands.”

The WVDNR has confirmed that Price’s catch has been certified as the new state record for blue catfish for both weight and length at 67.22 pounds and 50.7 inches long. It topped the previous record, a 61.28-pound blue caught and released on the Kanawha by Cody Carver on April 8, 2022, by nearly 6 pounds. The state record before that had stood untouched since 2016.

“My gut tells me that this record is probably gonna hold for a while,” Price says. “But if it got broke today, I’d congratulate the guy. I’d be happy for him, because it just shows that our catfish are getting big. They’re growing. I do think there are bigger fish in there, but probably not many.”

Amazon Is Banning the Sale of Opaque Mylar Bags

How Far Apart Should Deer Feeders Be? See This Ultimate Guide