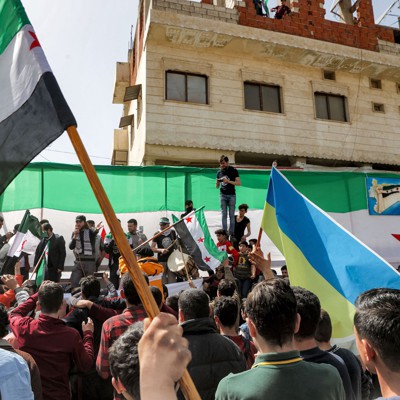 When NATO adopts a new strategic concept at the Madrid summit in June, the alliance will rightfully refocus on its founding purpose: defending Europe and reinforcing its military posture in the East. But its members must not neglect a key aspect of this effort: preventing Putin, whose ambitions extend beyond Russia’s immediate neighborhood, from roiling Africa and the Middle East to put pressure on NATO’s “soft underbelly.”

Western allies have for too long regarded Russia’s interests and actions in NATO’s eastern and southern flanks as two separate sets of foreign policy. As Russia pursued a regional power approach in the south, systematically building security-based relationships, the alliance perceived Russia’s strategy in the east much differently: a maximum political and economic pressure campaign to keep former Soviet states in Russia’s sphere of influence, supported by small-to-medium-scale military presence, but short of large-scale warfare against its neighbors.

That perception was exposed as fiction by Russia’s invasion of Ukraine, which shocked NATO members who believed Moscow would somehow confine its increasing use of military tools to Syria or the Sahel.

Internationally isolated after annexing Crimea in 2014, Putin reversed an expected loss for Syrian dictator Bashir al Assad and secured Syria’s role as a Russian client state. Consequently, the war raged on and produced a mass exodus of refugees toward Europe, sparking a migration wave that seriously challenged European countries’ internal cohesion. By establishing Moscow as a major power broker and gatekeeper—despite international outrage—the Syria intervention was a powerful tool to bring Russia back from its relative isolation after the Crimea shock.

Moscow saw its success in Syria as cause to systematically expand its reach across NATO’s Southern flank. Had it not been for the intervention of the Turks on behalf of the Tripoli government, Russia-backed strongman Khalifa Haftar might now rule Libya. Russia struck arms deals and expanded its military footprint across the region, upgrading a naval base in Tartus and using air bases in Syria, Libya, and Algeria.

More recently, Russia has also expanded its reach in sub-Saharan Africa and the Sahel. In 2020, Moscow signed an agreement with the government of Sudan to establish a naval base in Port Sudan, granting Moscow control over the Red Sea and Suez Canal, a maritime choke point. While short of a decisive military role, Russia has established itself as the lead international partner of governments in the Central African Republic, Mali, and Sudan. In Burkina Faso, a military coup this January was celebrated by crowds calling for a stronger Russian role. Moscow is repeating its playbook: capturing embattled authoritarian elites of strategically located countries, securing military positions, exploiting natural resources, training fighters, and testing weapons.

Of course, the conflicts on NATO’s southern flank have deeper-seated roots. They must not be viewed through a one-dimensional lens of Russia-NATO confrontation, nor will they be resolved by pushing back Russia. But exploiting these conflicts as a leverage pool for Russia-NATO confrontation consistently matches Russia’s approach and past behavior. NATO must be clear-eyed about Moscow’s intentions in the Sahel region and not be fooled by its attempts to portray itself as a mediator or stability provider.

Unfortunately, Russia seems to be winning this race. As France withdraws its troops from Mali, Russia keeps a sizable footprint in the country even as Putin pulls back mercenaries and foreign fighters from Syria and Libya for deployment in Ukraine. Russia’s reaction to Mali’s recent withdrawal from the G5 regional counterterrorism force last week, blaming it on undue Western pressure, also speaks to a worrisome Russian awareness and confidence regarding the Kremlin’s growing influence on the Sahel’s dire regional security outlook.

When NATO recalibrates its strategy this June, the alliance cannot neglect its southern flank. Putin sees both the East and the South as instrumental for Moscow’s overarching goal of pushing back NATO’s influence. He will use all means at his disposal to create additional threats for allies while the war in Ukraine is raging on closer to most alliance members’ homes. Strategically, he works the entire neighborhood as one geopolitical arena—and so must we.

Liana Fix is Program Director for International Affairs at the Koerber Stiftung in Berlin.

Kristina Kausch is Senior Resident Fellow at the German Marshall Fund of the United States in Brussels and Madrid.