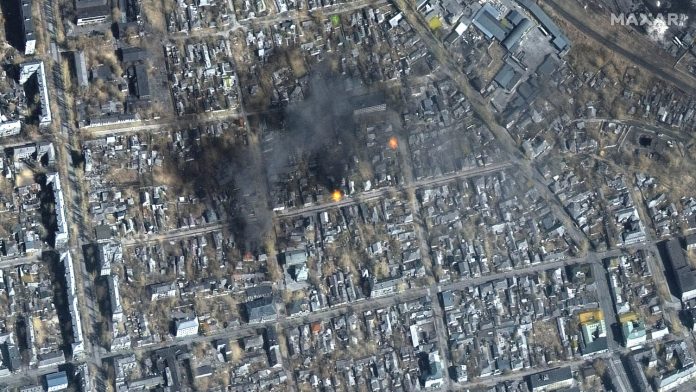 WASHINGTON: The National Reconnaissance Agency (NRO) today announced that it has awarded Maxar Technologies, Planet and BlackSky contracts for commercial remote sensing imagery, each with a five-year commitment and options stretching to 2032.

“Commercial imagery is a valuable tool for information sharing and decision making,” said Pete Muend, director of NRO’s commercial systems program office in a press release. “EOCL [Electro-Optical Commercial Layer] allows us to meet a larger number of customer requirements more quickly than ever before and dedicate national systems to the most challenging and sensitive missions.”

While the US has government owned and operated military and spy satellites, commercial imagery has proven to be invaluable in the war for global hearts and minds the government has been conducting in support of Ukraine following Russia’s invasion in February, as well as to Ukraine’s embattled government and forces in the field. Breaking Defense previously reported how US intelligence worked with commercial firms to circulate unclassified satellite imagery of Russia’s invasion.

All three vendors have been under study contracts with the spy agency; thus, it comes as little surprise that all three received awards under the year-long contest for its EOCL program. Electro-optical satellites use cameras in visible light wavelengths to take photos of the Earth, and are only one of a number of different types of remote satellites piquing NRO’s interest.

“EOCL includes a substantial increase in requirements for foundation data, intelligence points, and non-taskable data collection; shortwave infrared, nighttime, and non-earth imaging; and direct downlink to theater-based remote ground terminals — a vital capability for the military that has been successfully demonstrated in multiple exercises over the past year,” the NRO press release explains.

Maxar Technologies (previously as Digital Globe) for decades was the sole commercial supplier of imagery to the NRO, up until 2019 when the agency added Planet and BlackSky to its stable.

According to a filing today with the Securities Exchange Commission, Maxar’s five-year base contract is worth $1.5 billion, with one-year options afterwards worth up to $1.74 billion — a potential total of $3.24 billion over 10 years.

“Maxar has been a trusted U.S. Government partner for more than two decades, and we’re proud to continue to serve that mission under EOCL,” said Dan Jablonsky, Maxar President and Chief Executive Officer in a press release today. “This agreement provides a foundation for Maxar’s growth in the years ahead.”

BlackSky’s new contract is worth “up to $1 billion” over the 10 year timeframe, according to a blog post on the firm’s website by CEO Brian O’Toole.

“As you can imagine, this is a historic and monumental day at BlackSky,” he wrote. “The NRO has selected us provide advanced high frequency imagery services that leverage the constellation that we have on orbit today, as well as our future capabilities.”

Planet did not release a dollar figure for its contract in its press release today — but informed speculation would be that it received an award closer in size to BlackSky’s contract than to that of incumbent Maxar. The contract is with the firm’s US arm, Planet Federal.

“Planet has been proud to partner with the US government for many years, and the EOCL award is the next giant leap in our work together,” said Robbie Schingler, Planet’s co-founder and chief strategy officer. “We have long held the conviction that unclassified commercial satellite imagery not only equips the government with differentiated and innovative intelligence capabilities, but also increases transparency and accountability that advances global security, as well as trust between government and citizens. EOCL is this conviction realized.”

Made to take on Russia, Swedish Gripen fighter jets should go to Ukraine: Report