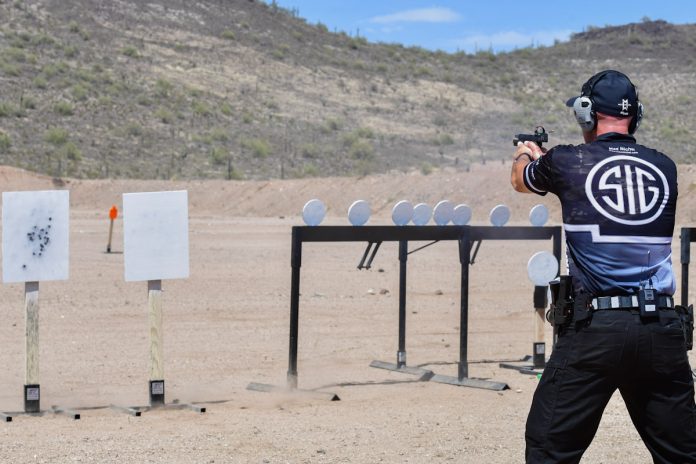 What has more than 500 guns and fires almost a half million rounds of ammunition over three days?  Sig Freedom Days had all that and more!

On May 6-8 Sig Sauer held its first Freedom Days event at the Ben Avery Shooting Facility in Phoenix, AZ.  It gave the general public a chance to try out almost all of the various Sig pistols, rifles, and PCCs.  As the Ben Avery range is in my backyard and a place I regularly shoot competitions, I drove over to see what it was all about.

Sig Freedom Days were open to the general public for the reasonable cost of $80 for a daily pass.  For that $80 attendees were able to shoot 10 different stations with a choice of over 50 guns.  If you wanted to shoot even more you could buy five more stations for $30 on site.  Sig provided all the ammo so there was no additional cost.

“We have had such great success at the SHOT Show Media Range Day that it made sense to offer an opportunity to the regular Joes out there,” said Phil Strader, Sig’s Director of Firearms Product Management.  “No special permissions, just pay 80 bucks and come shoot 10 stations.  The best way to appreciate the product is to get your hands on it and shoot it.  That’s why we put this event together, to expose as many people as possible to the Sig brand. We will have to wait and see how this one goes and get feedback from the people that attended.  I see this being something we do a few times a year.  This was our west coast debut; maybe we can do an east coast event.  This is just my idea and nothing is set yet.”

Just like Media Day, guns were grouped in various stations by type.  Pistols, Rifles, PCCs, and there were even airgun and crossbow stations.  There was a demonstration area with demos from the talented Team Sig shooters, Max Michel, Daniel Horner, and Lena Miculek.  Lena’s father Jerry was also on hand for demos with Mossberg shotguns, and the two paired up to battle it out on steel with the shotguns.  Viking Tactics Kyle Lamb was also on hand as the host of the team demo.

Up range from all the shooting was a tent for presentations.  Daniel Horner gave a talk about long-range shooting with tips and tricks. Kyle Lamb talked about training and combat mindset.  Max Michel talked about speed shooting and Lena and Jerry talked about shotguns.

That is a lot of information and entertainment but Sig was not done yet.  Justin Melnick and his dog Pepper from the CBS/Paramount show Seal Team put on a demo of the fur missile in action.  Pepper, a Dutch Shepherd, was most impressive blazing across the range at full song to leap and latch onto the arm of a guy in a bite suit.  I love to watch working dogs, so it was awesome that Sig added Justin and Pepper to the demo list for Freedom Days.  Pepper was a crowd favorite as well.

Sig also brought out their new NGSW XM5 replacement for the M4 carbine and the belt-fed XM250.  There was a Q&A about all the new developments that went into the new machine guns and a lucky few were able to shoot them.

Those that were not able to shoot the XM5 were able to shoot the MCX Spear in 6.5 Creedmoor.  The XM5 is based on the spear but the XM5 contract calls for the new Sig 277 Fury round (aka 6.8x51mm).  Like the 6.5CM the 277 Fury has the same case head size as the .308 Winchester.  That allows the use of the same bolt and magazines for all three calibers in both the XM5 and XM250.

Next to the presentation tent was a vendor area for sponsors of Freedom Days.  You could talk to and try products from companies like 5.11, Firearms Policy Coalition, Timney Triggers, Galco Holsters, and more.

I hope that Sig puts on more Freedom Days events in the future.  Team Sig Captain Max Michel agrees.  “This is the first of what I hope are many Sig Freedom Days to be put on.  These are the consumers, the guys that are shooting our products; that are passionate about our products.  For us to be able to give back to them, to give them an opportunity to share knowledge, learn from us, see the pros shoot, and get to shoot everything we have to offer here, it is pretty incredible and I hope it is not the last one.”

Sig Sauer pulled out all the stops for Freedom Days.  They brought 180 staff members and a ton of guns.  How many guns?  No one gave me an exact number but I did learn that each shooting station had a new gun for each day of the event and they each had a backup.  With 50 different guns to shoot, and with most stations having 3 or more of each model, times three days, times backups put the number of guns at upwards of 500.

Sig estimates that about 4,000 people attended the event and those people fired more than 350,000 rounds of ammunition in more than 10 different calibers.

About the author:
Matt Kartozian is a current Hi-Point Grand Master and former professional competition shooter, and gunsmith. Matt now works as a photographer and writer and can often be found on the sidelines of professional sporting events and on racecourses around the world. You can follow Matt’s adventures on Instagram at
https://www.instagram.com/customglock/
and
https://www.instagram.com/durkadurkaphoto/