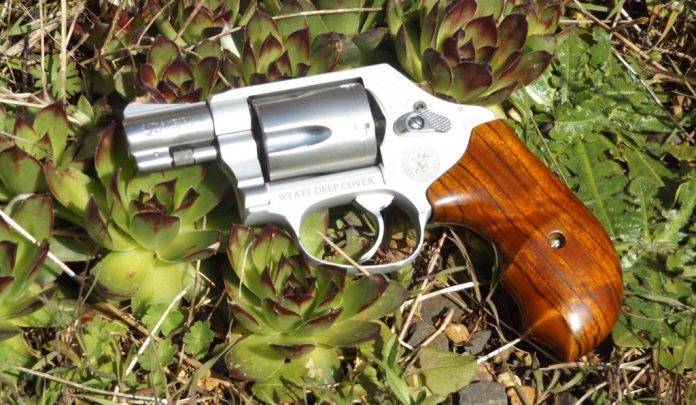 I don’t normally write about firearms that have been discontinued. However, there are still a lot of this model still available on the secondary market – just too bad S&W discontinued them – more on this later.

The Wyatt Deep Cover, is a modified S&W Model 637. The modifications were designed by a former FFL dealer in Colorado. It is sad that he went to prison, but he flaunted what he was doing – illegally, on a television show. So it was only a question of time, before the Feds closed in on his operation. I won’t even say his name in this article, because he gave honest FFL dealers a bad name. He would fly around Colorado in a helicopter, showing everyone how well off he was. He was doing gun sales away from his shop – that is illegal – an FFL holder can only do gun sales deliveries away from your shop, at a regular and recognized gun show. He was doing deals – big money deals – away from his shop. I don’t know if he was ignorant of the law or if he thought he wouldn’t get caught – but he did!

Years before, he had contacted S&W and told them he could modify one of their 637 revolvers in less than half an hour, so they would be custom guns. He was invited to S&W to demonstrate his technique, and sure enough, he could modify one of these guns in half an hour, and it was a super-smooth double-action revolver, the equivalent of stuff out of their Performance Center. Smith & Wesson bought into the idea, and were factory producing these guns, with the “Wyatt Deep Cover” name on the frame, and “Gunsmoke” on the barrel.

I’ve owned a few revolvers from the S&W Performance Center over the years, and every one of them were a real joy to own and shoot. However, the Wyatt Deep Cover was everything you would expect from a Performance Center trigger job and then some – and the price was kept down – only slightly more than a Plain Jane factory Model 637. And, again, it only added less than half an hour of manufacturing time to do these modifications at S&W.

As I stated, these guns have been discontinued. However, there are plenty of them still for sale on the Internet at sites like GunBroker.com, if you shop around. Prices range from $500 to almost $1,000 depending on the condition of the gun. By the way, I don’t “collect” firearms – I never have – I have a small number of firearms – that’s it. When I worked for the late Col. Rex Applegate – look him up on Google – I maintained his gun and knife collection – at that time he had about 850 guns in his collection and several hundred knives – now that was a gun collection. It was great handling some of those historic firearms and prototypes.

Mechanically, the Wyatt Deep Cover Gunsmoke Special is pretty much a basic J-frame Model 637, chambered in .38 Special and it will easily handle +P loads, too. It holds 5-rounds in the cylinder, and the barrel length is 1.87-inches long.  It will accept standard J-frame spedloaders.  The front and rear sight are integral – no adjustments. The gun is also double action only – no cocking the hammer for single action shooting. However, the trigger pull is soooooo light and easy, it is simply amazing how smooth it is – pulling that trigger for double action shots. The gun only weighs in at 14-ounces, so it is very easy to pack daily. The frame is aluminum alloy and the cylinder and barrel are forged stainless steel. It came with skimpy plastic grips, and I changed them out for some really nice custom wood grips, to provide a much better purchase on the gun.

The cylinder flutes are highly polished, and the bobbed hammer and trigger are similarly highly polished. All things considered, at first glance this looks much like Plain Jane Model 637. The clip grips that came on the gun were designed for packing this handgun inside your waistband. I’ve never cared for carrying any gun without a holster. However, I can see folks packing this little revolver in a pants pocket – so long as there is nothing else in that pocket.

Testing was conducted at 25 feet – not yards, as this is an up-close and personal defensive handgun. It is not something I would carrying if I knew I was going into a shooting situation where shots might be longer. So, I believe 25-feet is a fair distance. From Black Hills Ammunition I had their 125-gr JHP +P ammo, and their HoneyBadger 100-gr all-copper hollow point with a 100-gr bullet.

My shooting was done with the gun resting over a padded rifle pad, that was on top of a huge boulder. I could easily keep all rounds right at 3-inches if I did my part, and remember, this was firing double action only. That is outstanding accuracy for a short-barreled revolver. The HoneyBadger inched out the JHP load, but only ever so slightly. I did my fair amount of shooting at rocks and tree stumps out to 50-yards and if I did my part, the gun was more than accurate for me to hit them. A man-sized target at those distances would be an easy shot, believe it or not.

The oversized custom wood grips, made shooting those +P loads a lot easier than the skimpy plastic grips that came on the gun. Of course, you give up a little bit concealability with the larger custom grips, but it is well worth it. I’ve packed this gun on/off in a Bianchi leather belt holster – and it worked just great. If I were still riding motorcycles, I would put this gun in an ankle holster to conceal it even more.

I’ve lost track of the number of rounds I’ve put through this little gun, but a lot of other people have shot it, too – and they all loved it. The only drawback is that, those +P loads are stout – they get your attention when you touch a round off. I’ve done some shooting with a lot of “range” ammo – this is ammo that is mixed from different makers – and I have no idea what grain they were, but the little S&W never missed a beat. I had some wadcutter ammo, and found that was easy to shoot in this lightweight revolver. I can only guesstimate, but I’d venture to say this little revolver has had over a thousand rounds through it with no problems.

A lot of shooters today feel that the “ancient” revolver has no place in a self-defense scenario. I disagree. With one or two 5-round speedloaders on your belt, this little revolver would make a good showing when the time arrives to use it. After the first exchange of gunfire, you should, without a doubt be seeking some kind of cover – not concealment, but genuine cover. The assess your situation, and reload and go from there. Don’t be a hero, save your bacon. Doubtful you’ll find yourself in a self-defense scenario where you’ll need more than 15-rounds to get you out of that situation – then again, anything can happen these days – be advised and stay alert. We live in a very dangerous world these days – no matter where you live.

I get asked all too often about ammo to carry in my firearms for self-defense. I’m not paid to endorse any ammo, no matter who makes it. However, I will say that I have more hands-on, experience with Black Hills Ammunition. I’ve been shooting their ammo for more than 30 years now, and have never once, been disappointed in their line of ammo – no matter what caliber it might be.

Let’s be clear on this, Black Hills doesn’t make your run of the mill, plinkin’ ammo – they produce premium ammo the best of the best, if you ask me. They are the only producer of 5.56mm ammo for all of our special forces – no matter which branch of the military – Black Hills has produced it for all the branches. Plus, when other ammo makers, who produce 5.56 mil-spec ammo run behind, Black Hills steps in, and fills that gap. I’ve had discussions with Jeff Hoffman, who is co-owner of Black Hills, with his wife Kristi, and you would not believe the manufacturing and testing procedures they have to go through to produce ammo for the military. What isn’t well known is that Black Hills also produces ammo for most, if not all, of our alphabet soup government agencies.

I’ve grown to be really fond of the Black Hills HoneyBadger rounds – in any of their calibers for self-defense. These rounds are not dependent upon expanding to get the job done – to stop the bad buys. These rounds are an all-copper, solid round that is fluted. It will penetrate deep enough and do enough damage to stop the bad guys, And, because these rounds are lighter in weight, for the caliber, they don’t recoil as much, either. I mostly pack a 9mm these days, and whatever gun it might be, it is loaded with the HoneyBadger 100-gr all-copper solid round. If I’m packing a .45 ACP, I will be with the 135-gr HoneyBadger round…if I’m out on the trail, I’ll go with a heavier, more traditional JHP load from Black Hills. So, it is not always the “caliber” that we have to look at, when it comes to self-defense, we need to look at the particular ammo as well. Keep this in mind!

“And God said unto Noah, This is the token of…”

States, Counties and Places with No Building Codes in the USA: Comprehensive List

Biden Adds To His Ever-Growing List of Lies, Threats as He Continues His Push Against Gun Rights