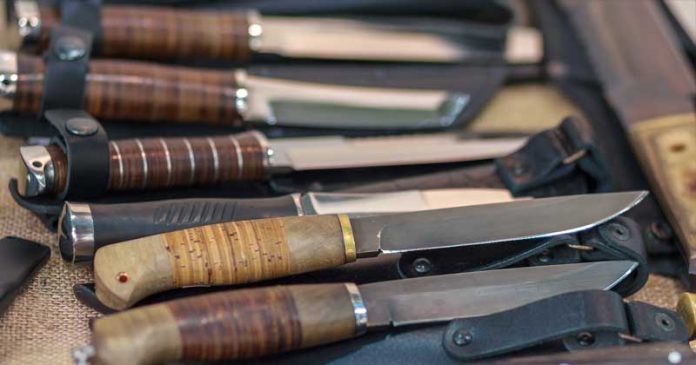 There are a lot of different types of survival knives, like neck knives, folding knives, combat knives…

After you’ve decided on what type of knife you need, the next step is to look at the blade shape.

The blade shape is what makes a knife suitable for certain tasks.

For example, you may want a blade shape that is better for:

What Is the Best Blade Shape for a Survival Knife?

The drop-point blade is considered the all-around best shape for survival knives.

The shape offers a good balance between strength, functionality, and ease of use. The runner-up is a clip blade knife shape.  It has a bit more of a point so it is better for piercing and detailed work.

There are literally dozens of different knife blade shapes.  These are the most common you will find on survival knives.

The drop point blade shape is very common on survival knives (it’s also my personal favorite blade shape).  The blade has a convex back which gradually slopes towards the point. You get a large cutting surface which is also very strong. It can handle tough tasks like batoning wood, but there is also a bit of a point for doing some precision work like carving.

Clip point blades are also very common on survival knives.  With this shape, the tip is clipped from the spine.

This means the cutting area (belly) is smaller than with the drop point blade, but you get a sharper point.  The sharp point makes it better for stabbing, skinning and piercing tasks than a drop point.

However, a thin point isn’t going to be as strong.  It’s easy to break the tip if you abuse the knife.

Trailing point survival knives have a long, curving blade that comes to a fine point. I find them very attractive.

The curve gives the knife more belly, so it is great for slicing and skinning.  They aren’t very strong and not suitable for stabbing.  However, the fine point and long cutting surface make this type a favorite with hunters.

Because there is material on both sides of the point, the tip is quite strong.  This shape is often used for throwing knives and daggers.  The shape also means you can “drill” into wood with the tip.

A needlepoint survival knife is similar to a spear point blade.  The difference is that needlepoint knives are narrower.  The narrow point is sharp but weaker.  There’s basically no cutting edge for it’s only really useful for stabbing.

Tanto type survival knives are mostly popular because they look cool.  They aren’t just gimmicks though.  The shape creates two distinct cuttings edges. This is fairly versatile because you can cut but also get a point for precision work.

The hawkbill survival knife is the opposite of a trailing point.  It is terrible for slicing but the hooked shape makes it great for cutting through tough materials like shrubs and rope.

You can put your fingers on the spine and press down to get a lot of force on this knife.

Also called a “standard” or “normal” survival knife, this shape has a flat back.  That allows you to apply pressure to the blade.  The shape is also pretty strong but not as versatile as a clip point.  It’s more commonly found on cooking knives than survival knives.

The sheepsfoot (which was originally used for trimming sheep hooves) has a straight blade with a back that angles downwards.

The straight blade is great for cutting and you have a lot of control when holding it. There’s no point, so it is very strong.  It’s also less likely that you will accidentally stab yourself. You’ll often see this blade shape on EMS knives.

The Wharncliffe blade shape is very similar to the sheepsfoot.  The main difference is that the Wharncliffe (which was originally used by sailors) has more of an angle on the back, so you get a bit of a point on the blade.

The point and ease of control make it great for whittling.

Kukri survival knives are used in the army and are also common on machetes in some parts of the world.

The curved shape is great for bushwacking and very strong.  It also has a decent tip on it so can be used for self-defense. It takes some practice to use but can be very versatile once you get the hang of it.

What’s your favorite knife blade shape and why?  Let us know in the comments section below.

Head of Texas DPS: The Uvalde Police Response Was ‘An Abject Failure’