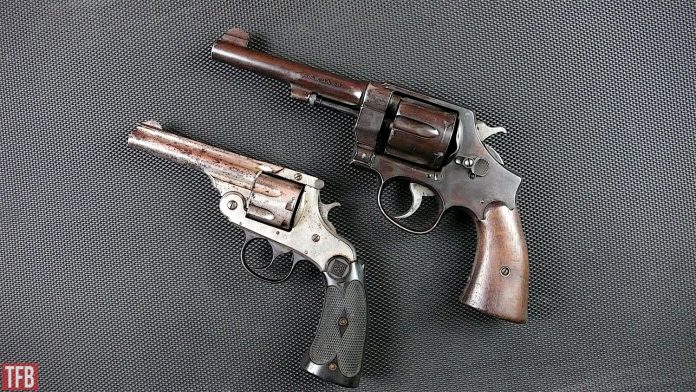 Thanks for joining us on another Wheelgun Wednesday on TFB, where we try to cover all things revolvers. This week, we’ll take a quick look at the two revolvers I scored from a local gun auction, a Harrington & Richardson Auto Ejecting .32 S&W, and a Smith & Wesson 1917. I’m still quite stoked that I landed these historic firearms, even if it means that I’ll be widening my caliber footprint … again.

I’ll start off by saying that my region can seem pretty old school. Most estate auctions, that also have guns, typically involve a few break action shotguns, cheap pump action shotguns, and maybe a .30-06 bolt action thrown into the mix (you can tell the extroverts when you find one in .22-250). Of course, that’s not everyone’s collection, but it’s what I see most commonly on public poster boards, so I had to do a double take when I saw highly sought-after military surplus rifles on a poster on the gas station wall. There were roughly 125 guns up for auction, plus swords, knives, helmets, and ammunition. Most notable amongst the collection were a Gewehr 43 (G43), a Winchester 1897 Trench Gun, a Polish wz35, a few Mauser C96s, and a Lee Enfield No 5 “Jungle Carbine.” I’ve always liked the history of the S&W 1917 revolver and covered a couple examples for TFB’s Wheelgun Wednesday thus far, so naturally, I was pleased to see two such models up for auction and I knew I was going to try for one of them.

TFB writer Benjamin F warned me about the “buyer’s premium,” but I was relieved to hear from the auction company that this auction would not include a buyer’s premium. Each firearm would still have a transfer fee though, so I kept that in mind each time I bid on something at my local gun auction.

Of the two S&W 1917s the local gun auction had, I only had time to handle one of them, which looked more like a later commercial model that was pretty beat up on the outside. So I opted to try for the one with smooth, non-checkered grips. I won the top bid in the $500 range. While this price wasn’t bad, the transfer fee brought it a little closer to the average price I’ve seen S&W M1917s going for in the current market. The overall finish looks a bit rough and splotchy in some areas, and even looks to have a browner hue than blue, especially when compared to my Lend-Lease S&W .38. The trigger is a bit of a conundrum, and what I have to call “the worst revolver trigger I’ve ever trigged” (along with my verbiage) that I alluded to in a previous Wheelgun Wednesday article. The trigger, when it works, is actually pretty good, and when it doesn’t work, it’s at least predictable. On double action, there’s one pull where the hammer hangs up, and you just have to hold the trigger until it finally trips, but it happens about the same time every six dry-fires. On single action, three times out of six hammer cocks, the hammer won’t actually lock back. Despite my 1917 having all matching numbered parts, I’m not above swapping internals to make it work better. Where would you suggest I start first? From what I’ve seen, there’s not a huge buzz over old Harrington & Richardson revolvers, and to be honest, they never really caught my eye that much until the price piqued my interest. The local gun auction company started the bid around $25, and no one bid on it, so they dropped the starting bid to $10. I raised my hand and took the bid, and still, no one countered. Of the 125 guns, I had the lowest bid of the day! The H&R Auto Ejecting .32 S&W is a curious little top-break revolver, and even though it’s a lot uglier than a Webley, it should give me that Webley-esque feel and function for a lot less money. The auto eject looks like it’s in great condition, but I had to special order some ammo, so stay tuned for the review here on TFB. The nickel is getting pretty worn and the grips are cracked in one of the corners, but overall, it still seems pretty solid. There’s no extra locking on the cylinder, so it’s possible to bump it out of line from the forcing cone, which is a little worrisome, however, I’ve dry fired it enough, making sure not to touch the cylinder, and each chamber seems to line up perfectly with the bore by itself. What do you think about my new-old revolvers? If you have one or both of these wheelguns, how has your experience been? Would you have bid on the H&R for $10? What have you scored at your local gun auction (or any other auction)?

Omnibus Bill to Fund CWD Bill But Not RAWA

Carjacking Victim Fires Back in Nashville – Gun Reviews and News