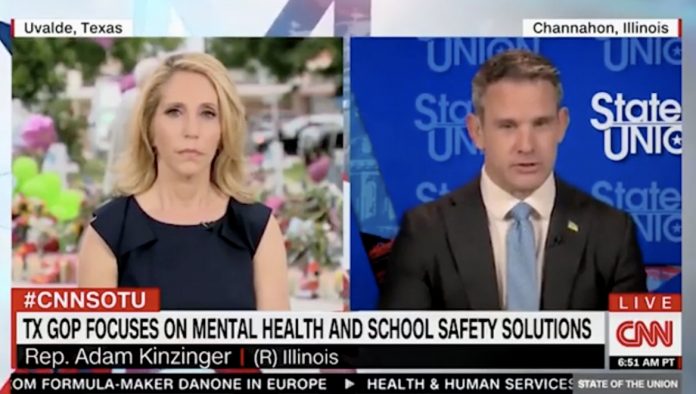 In the wake of the deadly attack at Robb Elementary School in Uvalde, Texas, last week, at least two Republican lawmakers have come forward to voice support for banning AR-pattern rifles.

Rep. Chris Jacobs (R-NY) and Rep. Adam Kinzinger (R-IL) have indicated that they would both vote for prohibitions on America’s best-selling rifle.

Kinzinger told CNN’s “State of the Union” that while he’s “open” to a ban, he’d also consider supporting a law that requires “additional certification” (see video above).

“It’s going to depend on what it looks like because there’s a lot of nuances on what constitutes, you know, certain things,” Kinzinger said. “But for somebody to own one, maybe you need an extra license, maybe you need extra training, so the question is is it a ban versus additional certification?”

Kinzinger added that while “99.9 percent” of AR-owners are not going to shoot up schools, movie theaters, and supermarkets, GOP lawmakers who support the 2A have to be “coming to the table with ways to mitigate 18-year-olds buying these guns and walking into schools—my side’s not doing that.”

Likewise, Rep. Jacobs said he would vote for one, though he stopped short of supporting mandatory “buyback” programs and other forms of thinly-veiled confiscation.

Jacobs, who was endorsed by the NRA in 2020, also said it might be time to prohibit magazines with a capacity over 10 rounds.

“I think it’s reasonable to say: does a civilian need more than a 10-round magazine in their guns?” Jacobs asked.

It’s well documented that “personal weapons,” aka hands, fists, and feet kill more people each year in this country than all rifles combined (or rifles as an entire category), which of course includes the unfairly maligned AR-15.

Per FBI data, there were 455 rifle homicides in 2020 compared to 662 deaths from “personal weapons” in the context of the 17,813 reported homicides.

While there is a category of gun homicides where the type of firearm is not recorded, which means the number of rifle homicides may indeed be slightly higher, the fact remains that rifles are used in a low percentage of annual homicides, and in less than 3 percent of total homicides in 2020.

Given this data, it’s hard to see how even a total, confiscatory ban on ARs would make a difference, especially when one also considers that even most mass killers use handguns to perpetrate their attacks.

By the numbers, handguns were involved in 77 percent of mass shootings between 1982 and May 2022, according to statista.com.

Nevertheless, the legality of modern sporting rifles remains a central focus in the current 2A debate: