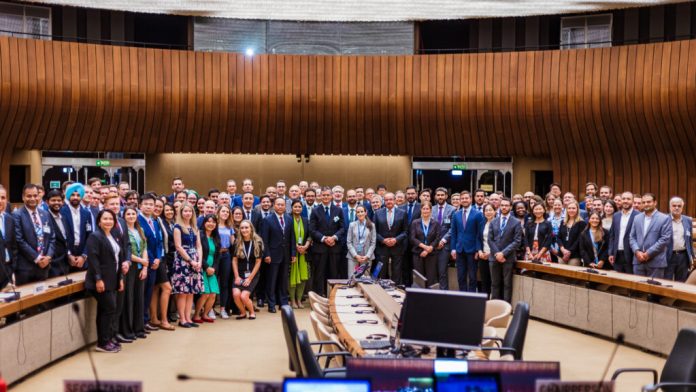 WASHINGTON:  Diplomats and experts at the first formal meeting of the UN working group attempting to forge new international norms to guide military activities in space were expecting the worst — that the week-long meeting would start and end in finger-pointing acrimony — only to be surprised by what key players say was for the most part a productive launch.

“Everybody said: This is no going to work, so why waste your time,” said one non-US negotiator at the May 9-13 meeting in Geneva of the UN Open Ended Working Group on Reducing Space Threats. “The fact that the meeting actually took place and we had a discussion, that is already by itself a good thing.”

“The week was really good ‘the process is the product,’ so just having the discussions was a great first step,” one Western diplomat agreed. “The meeting was designed (as the first part of the mandate) to open up the subject in greater depth to the majority of nations that have not previously thought about the problem. So, to some experts, it might have felt like a waste of time — but it wasn’t.” (As with any diplomatic endeavor, national representatives and involved experts contacted by Breaking Defense for this report requested anonymity to more openly discuss the fragile negotiations.)

In particular, the negotiator said, there was a collective sigh of relief that Russian delegation did not repeat its previous obstreperous performance at the February pre-meeting to organize the structure of the OEWG deliberations, where it raised a litany of procedural objections that caused the kick-off meeting to be pushed back from planned Feb. 14 date to this month. Those objections required the intervention of the General Assembly to sort through.

The civil atmosphere at the OEWG prevailed despite the fact that Western delegations walked out of the Geneva meeting at one point when a Russian delegate began a rant about alleged Ukrainian war crimes in the ongoing war, several sources said.

“Throughout the course of the week, there were substantive discussions on the issues before the OEWG with significant engagement from a wide variety of States. The atmosphere was incredibly collegial despite the differences in positions,” a State Department spokesperson said in an email.

For the US, a handful of sources said, there was a small victory in that a dozen-plus countries spoke favorably about the Biden administration’s self-imposed ban on testing of debris-spewing anti-satellite (ASAT) missiles.

“The discussion set the stage for positive discussions in the future meetings of the OEWG, including on the U.S. proposal for an international norm against destructive direct-ascent anti-satellite missile testing,” the State Department spokesperson said.

Indeed, one country, Canada, announced at the OEWG meeting that it has followed suit. While no doubt music to the ears of US officials, this is hardly surprising, as Ottawa has been pushing a ban on all ASATs in various UN fora for years.

“For forty years, Canada has called for a ban on ASATs. … Today, we build on this legacy. Canada is proud to join the United States in pledging not to conduct destructive direct- ascent anti-satellite missile testing. We encourage all nations to join us so that together we can make this a global norm and towards enhanced space security,” the Canadian opening statement [PDF] reads.

Some experts, however, said that a number of developing nations seemed skeptical, essentially asking why they should sign up for a ban on something they had no intentions of doing.

“Support for that doesn’t extend much beyond Western states and allies such as South Korea, Japan,” one expert from an allied country said.

But others disagreed, saying that while developing states might not yet be able to see the benefit of such a ban, most weren’t opposed to the idea either.

“Individually, I spoke to a bunch of countries who said that they were not able to make similar commitments yet but the implication I got was that other countries were considering it. There is a real possibility it could show up and whatever report comes out of this process,” said one US participant.

A diplomat representing a close US ally agreed.

“I didn’t detect any significant scepticism in the developing country delegations about the destructive direct assent ASAT missile testing ban,” this source said in an email. “They may not be planning on doing it themselves but they would be affected by others doing it, so I felt most voices that mentioned it were welcoming of it, albeit as a first step. Even Russia acknowledged it as a ‘positive signal’ (but of course then criticised US space activity in detail).”

Indeed, neither China nor Russia was thrilled by the US proposal, a number of sources said.

“China in theory welcomed the moratorium but sees it as cynical, Russia as hypocritical,” the allied expert said.

Russia And China: Together, But For How Long?

As is clear from the two countries written statements at the OEWG meeting, so far the Russian and Chinese delegations have generally been on the same page — pushing for their own proposal for a legally binding treaty, the Prevention of the Placement of Weapons in Outer Space or PPWT for short (as they have for at least two decades). That treaty proposal is focused on banning the placement of weapons in space, and long has been opposed as unworkable by Western countries in part because it does not address terrestrially launched weapons.

“Russia and China are still focusing on the PPWT and no first placement but that’s no surprise. They are trying to argue that they focus on behavior and are within the remit of this OEWG,” the US expert said.

They also both raised objections to assumption made by a majority of participating states that international humanitarian law (IHL, also known as the law of armed conflict) is applicable in space — raising eyebrows among a number of delegations.

“Their approach was mainly based on a premise that space should not be a domain of conflict, and that discussing application of IHL in space increases the risk of it becoming so,” the allied diplomat said. “However, I would say the overwhelming view in the room was that UN Charter, international law and IHL apply in space.”

“Russia/China are positioning themselves as the champions of developing countries who prioritize access to space tech for peaceful purposes and don’t want to see space as a warfighting domain,” the US expert explained.

All that said, several participants opined that there seems to be a growing difference in attitude between the two delegations — with the Chinese subtly distancing themselves from their Russian colleagues.

“They were quite flexible and constructive,” said the negotiator. “That was very interesting.”

As Breaking Defense has reported, where the developing countries come down will be crucial to the success of failure of the OEWG process, and they are for the moment wild cards, as many simply aren’t as deeply aware of the issues by nature of not being spacefaring nations. And those that are — for example, Brazil, India and Iran — traditionally have been suspicious that Western proposals are aimed at corning the lucrative space market.

Indeed, Iran had the harshest words for the West, several diplomats said, denouncing NATO’s move to declare space an allied operational domain and criticizing what it sees as an effort to arm the heavens while preventing others from reaping the benefits from space commerce.

On the other hand, Brazil in its opening statement [PDF] welcomed the US ASAT proposal as a positive “first step,” while saying that it is clearly not enough.

And India “is changing their tone and becoming more constructive,” the negotiator said.

Further, the Philippines — not exactly a major spacefaring power, although one that is trying to up its game — also played a surprisingly active role, including submitting a white paper [PDF] on another hot topic in the debates: the question of defining what is meant by the Outer Space Treaty’s mandate that space operators act with “due regard” for others.

Finally, in something of a first according to a delegate from the region, the 10 nations of the Association of Southeast Asian Nations, or ASEAN, issued a written statement [PDF] that, while written at a general level of principles nonetheless made it clear that they are in favor of the OEWG’s goal. (The ASEAN countries are Brunei, Cambodia, Indonesia, Laos, Malaysia, Myanmar, the Philippines, Singapore, Thailand and Vietnam.)

Focus On Threats Next: Expect Fireworks

The second of the four planned OEWG meetings is now set to take place Sept. 12-16, and the focus of that discussion will be around what nations see as threatening behavior by military space operators.

“I imagine that it will start to get spicier,” the allied expert said wryly.

The US expert agreed: “I anticipate that one will be quite lively.”

Indeed, diplomats said they are already trying to figure out how to avoid a train wreck of accusations, especially between the US and Russia, and avoid the pitfalls that have been the downfall of efforts over the past several decades to address space security in other UN fora such as the Geneva-based Conference on Disarmament.

“It could become very nasty, but we will try to avoid that,” the negotiator said.