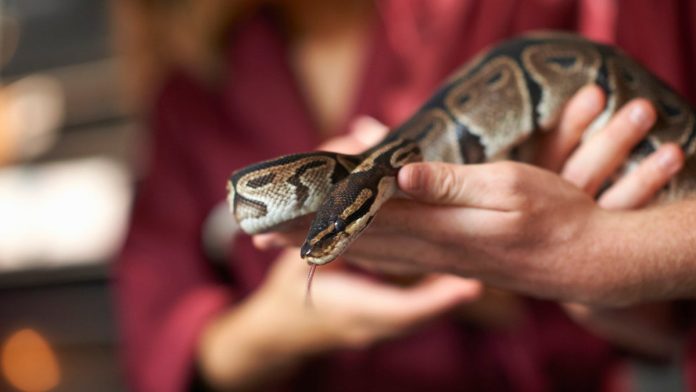 So, there are a lot of things one might find hidden, forgotten, or just plain lost behind a fryer at a fast food joint. A spatula. A handful of old French fries. The occasional chicken nugget.

However, employees at a Sonic Drive-in in Brunswick, Georgia, may be leading the race when it comes to the least likely things to find when on May 21, they discovered a python curled up behind their deep fat fryer. And what did the workers do upon finding the reptile? Well, they did what any self-respecting individual might. They ran. Quickly.

Initially, local law enforcement was told by Sonic staff the snake appeared to be brown in color, with a suspicious diamond on its back; and officers questioned whether the snake was venomous. “When I saw it,” police lieutenant Matthew Wilson told The Brunswick News, I recognized it as a ball python, and not a rattlesnake.”

Native to western and central Africa, ball pythons are one of the, if not the most, popular species to keep as a pet. Unlike rattlesnakes and pit vipers, ball pythons are not venomous, but rather capture and constrict their prey—rats, wild gerbils, and other small rodents—then swallow them with the help of 100 inwardly curved teeth. Typically, female ball pythons are larger than males, averaging three to four feet in length, with seven being considered the maximum.

Officer Wilson used a broom handle to expertly direct the python out from behind the fryer, and, once he had its head secure, was able to place it in a paper bag. According to the officer, the snake, which has already been taken in by a new owner, was likely released into the community by its original human. “Sonic leaves the back door open often,” Wilson told The News, “and I’m thinking the snake, thirsty, hungry, and cold, was out hunting and found the [spaced behind the fryer] warm. They like the warmth.”

Best Broadheads for Elk of 2022