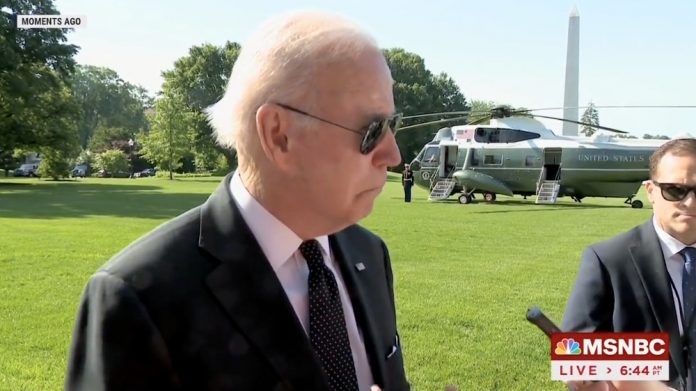 “There’s simply no rational basis for it in terms of self-protection.” pic.twitter.com/lPITAN5kEU

President Joe Biden is notorious for talking nonsense about firearms and the 2A.

Here are just some of his past remarks:

Well, this week he was at it again while talking to the press after disembarking Marine One on Monday.

Biden referenced a recent visit to a New York hospital where doctors showed him x-rays of victims with gunshot wounds.

“They showed me an x-ray,” he said, recounting how a 9mm bullet from a “high caliber” weapon causes more damage than a .22 caliber round.

“A 9 mm bullet blows the lung out of the body,” he continued. “There’s simply no rational basis for it in terms of self-protection, hunting.”

To make matters worse, 46 then reiterated his lie about a founding-era ban on cannons which has been explicitly fact-checked by The Washington Post. The Post gave it four Pinocchios, which means it’s a “whopper” of a “false claim.”

Several GOP lawmakers scorched the president for his astounding ignorance.

“The 9mm is the most popular self-defense round in America, and the caliber of choice for his own Secret Service,” Oklahoma Senate candidate Rep. Markwayne Mullin told Fox News Digital. “Biden’s ignorance is a threat to our constitutional liberties.”

House Minority Whip Steve Scalise (R-LA) added that Biden, “finally admitted how widespread the Socialist-Democrats’ gun control agenda is when he calls for the banning of handguns that citizens use to keep their families safe from criminals.”

“Law-abiding Americans have a constitutional right to protection whether Joe Biden likes it or not,” Scalise continued. “Especially as crime rates soar in Democrat controlled cities across the country, now more than ever Americans are exercising their right to defend themselves from the violent criminals being released on the streets by ‘defund the police’ leftists.”

Reports indicate that Biden plans to meet with lawmakers in the coming days to discuss various gun control measures.

On a positive note, at least Biden is somewhat aware of his own limitations, as he admitted to reporters Monday that he doesn’t have the power to ban guns.

“I can do the things I’ve done and any executive action I can take, I’ll continue to take. But I can’t outlaw a weapon. I can’t change a background check. I can’t do that,” Biden explained.