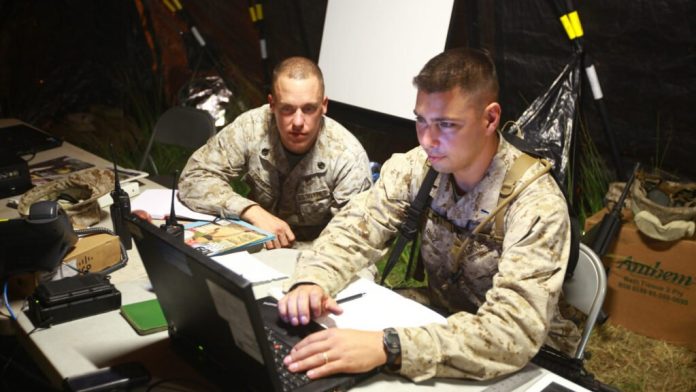 WASHINGTON: General Dynamics Information Technology is partnering with Microsoft to deliver a suite of Office 365 applications to support the Marine Corps in contested battlefield networks under a new task order awarded by the Defense Information Systems Agency.

“DEOS is an integrated commercial solution that is being implemented DOD-wide to seamlessly integrate email, content management, web conferencing, chat, office productivity, and native audio and video tools,” according to the press release. “The Pentagon is deploying DEOS in several environments, including the DDIL environment, where reliable and timely connectivity to warfighters at the tactical edge is critical.”

Under the task order, GDIT will partner with Microsoft to test capabilities, scenarios and provide recommendations for mission partners deployed in a DDIL environment.

The company is on the hook to deliver secure on-premises and cloud support services, and the work “will deliver proof-of-concept validation of the DDIL solution and enable future DOD DDIL needs,” the press release states.

Microsoft 365 will be deployed in both unclassified and classified environments under the DoD-wide DEOS initiative.

DoD and the General Services Administration in 2019 initially awarded a $7.6 billion DEOS contract to CRSA (which had by then been acquired by General Dynamics) and subcontractors Dell Marketing and Minburn Technology, but that award was protested by enterprise tech firm Perspecta. After a review of the procurement, the contract was reawarded at a lower value, $4.4 billion, in 2020 to the same firms.

“DEOS is a key part of the Department’s Digital Modernization Strategy and its fit-for-purpose cloud offering will streamline our use of cloud email and collaborative tools while enhancing cybersecurity and information sharing based on standardized needs and market offerings,” DOD Chief Information Officer Dana Deasy said in a statement Oct. 30, 2020.

Deasy said DoD was determined it could “achieve faster department-wide adoption of cloud collaboration capabilities by moving forward in a federated manner to the DoD 365 (IL 5) cloud environment while ensuring the individual components efforts work together to create an enterprise capability.

“This approach required the government team to assume a greater responsibility up front to shape the enterprise standards. With the award of DEOS, the Department will be able to transfer a significant part of the ongoing technical and management load to the integrator and free up strained resources to execute other priority missions.”

The DEOS contract includes a five-year base period with two two-year options and one one-year option, according to the 2020 statement.

As for the Marines task order, GDIT’s Leigh Palmer said the work “will provide and test powerful collaboration capabilities for the warfighter while driving efficiencies.”

“It will also provide critical input to the DOD DDIL working group as they continue to focus on finding solutions for seamless operations in such environments,” she said.

A Picture from History: Edward A. Carter Jr.

American Redoubt. Hageman ahead of Cheney.