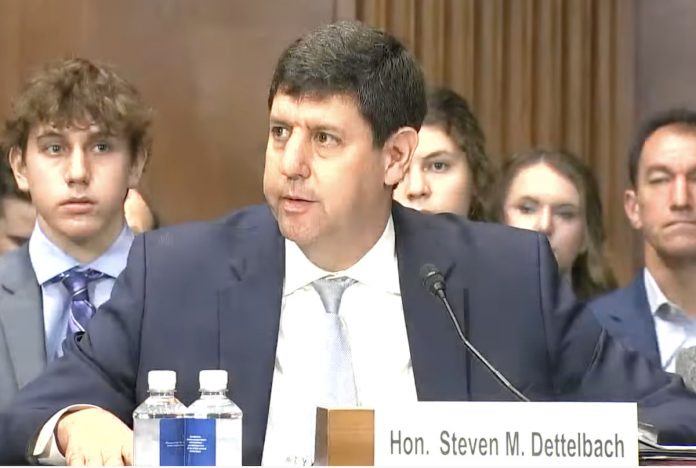 President Joe Biden’s second nominee to lead the Bureau of Alcohol, Tobacco, Firearms and Explosives (ATF), Steve Dettelbach, answered questions from U.S. Senators in front of the Senate Judiciary Committee. The hearing was held in the shadow of the incomprehensible tragedy in Uvalde, Texas.

The president’s first nominee, David Chipman, was forced to withdraw his nomination after his record and questions about professional conduct led even Senate Democrats to reject him.

Dettelbach, a former U.S. Attorney in Ohio, answered questions during the three-hour hearing.

During the committee hearing, Dettelbach was asked pointed questions about how he would lead the agency that oversees and regulates federal firearms licensees (FFLs), the firearm retailers in communities across the country. Those retailers are very often the first line of defense against would-be criminals attempting to purchase firearms, as well as offering tips to local ATF agents to help keep neighborhoods safe.

Dettelbach largely kept his answers focused on four main themes, including; the importance of partnering with state and local law enforcement; vowing to stay above politics; strong and fair law enforcement; and using the tools that Congress gives him.

“Last June, the president announced that the ATF would be going after ‘rogue’ gun dealers who ‘willfully’ violate the law with a zero-tolerance policy,” Sen. Grassley said. “You’ll be in charge of overseeing this policy if confirmed. Define rogue gun dealer for me. Can you tell me what counts as a willful violation? Would it include a clerical error that would have historically been treated with a warning?”

Dettelbach explained, “The key to enforcement programs, it has to be fair, it has to be consistent, and it has to be effective,” he said. “As a lawyer, the word willful implies something more than an inadvertent error. It implies an intentional misstatement. I have… communicated with people who represent and who are in the industry. And I would commit… to continue doing that, to hear all perspectives to be a fair regulator.”

Sen. Grassley finished by asking Dettelbach about the proactive approach to keeping neighborhoods safe that firearm retailers often take, stating it is local retailers providing tips and information that lead to criminal prosecutions.

“I have been told by people I’ve talked to in the run up to this hearing that it’s often the ATF does get tips from people in the industry. I’ll go through the ATF or the FBI or local police,” Dettelbach explained.

President Biden, Democrats in Washington, D.C., and national gun control groups continue to push for a renewed ban on so-called “assault weapons,” their misleading terminology for semiautomatic centerfire Modern Sporting Rifles (MSRs). More than 20 million MSRs are in circulation and the rifle has become dramatically more popular for recreational sport shooters, hunters and for owners who purchased the firearm for self and home defense. While ownership has greatly expanded, violent crime actually went down in the years following the expiration of the previous 10-year “assault weapons” ban, according to a report from the CDC. It said, “the Assault Weapons Ban (AWB), which also restricted magazine capacity, did not reduce crime rates.”

U.S. Sen. Tom Cotton (R-Ark.) keyed in on this and used time to question Dettelbach about his campaign for Ohio State Attorney General in 2018. Dettelbach supported a ban on so-called “assault weapons” and it earned him endorsements of gun control groups like Everytown for Gun Safety.

Sen. Cotton asked, “What is an assault weapon? Could you define it for me?” Dettelbach couldn’t define the rifle he wants to ban. “I did talk about restrictions on assault weapons. I did not define the term, and I haven’t gone through the process of defining that term,” he told Sen. Cotton. “That would only be for the Congress if it chose to take that up to do.”

“I acknowledge that’s a very difficult issue. That is for this body to decide,” Dettelbach said.

President Biden, senators and Members of Congress are anxious to “do something,” about gun control. Senate Majority Leader Charles Schumer (D-N.Y.) notified his colleagues they may vote on House-passed gun control bills upon returning to Washington, D.C. President Biden is feeling the heat from gun control groups and allies for his failure in getting more gun control passed already.

Indications are the Senate may give Dettelbach the nod. Sen. Angus King (I-Maine), who said he would not support Chipman in the first nomination process, has already come out in support of Dettelbach. Sen. Joe Manchin (D-W.Va.), who has again stated he will not blow up the filibuster to pass gun control, and Sen. Jon Tester (D-Mont.) have both remained open too, as well as a handful of swing Republican Senate votes. Votes from the committee and well as full Senate could happen in the next few weeks.