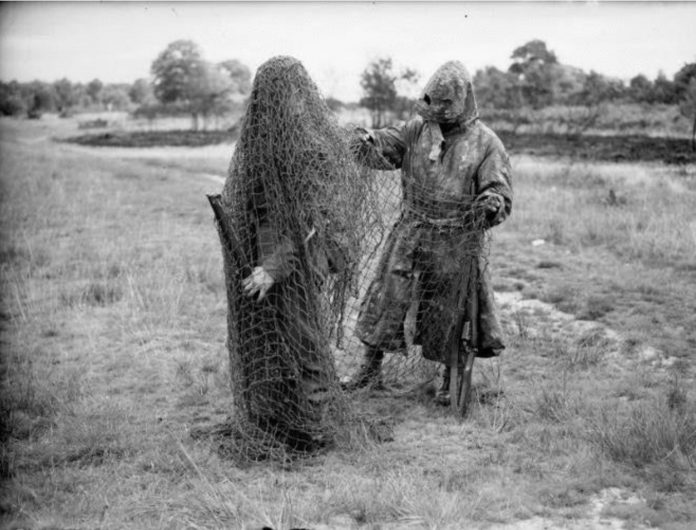 In May of 2017, a father of three named Troy Johnson donned a ghillie suit and stalked a 12-year-old girl as she was heading to school in New South Wales, Australia. The 31-year-old abducted, subdued, gagged, and raped the child. Police searched his home and seized several items of evidence that supported the resulting charges. There were allegations of other assaults and attempted assaults as well. This freaking loser supposedly suffered some kind of medical episode after his arrest and was subsequently hospitalized. He appeared in the Wyong Local Court after his discharge and was ultimately sentenced to 28 years in prison.

I struggle to comprehend what could drive a person to do something like that. Not meaning to sound uncharitable, but whatever his “medical episode” was, I can only hope it was something fairly agonizing. Most anything involving a power drill, a propane torch, or an intractable intestinal blockage would be OK with me. What makes this whole sordid tale pertinent to today’s discussion, however, was his attire. The ghillie suit has a long and fascinating military history.

Gille is a Scots Gaelic term that describes a young man who works outdoors. Gille Dubh translates to “Black-Haired Youth” or “Dark-Haired Lad.” The Gille Gubh is some kind of bizarre earth spirit adorned in moss and leaves that figures prominently in Scottish mythology. The general understanding is that ghillie is a poorly-translated version of this term.

Our Australian comrades call their ghillies “yowie suits.” This is a reference to the yowie, a mythical aboriginal creature akin to the Sasquatch. While there are a dozen or more local names for this thing, they all describe a hairy ape-like hominid that stands and walks upright. I rather suspect the yowie accounts for more than a little lost sleep among Australian children.

The ghillie suit is simply a camouflage outfit designed to meld a sniper into the background vegetation and leave him essentially invisible on the battlefield. In years past, ghillie suits were handmade as part of sniper training. Traditionally, this involved sewing strips of burlap of various colors onto an old camouflage uniform until the end result was adequately leafy and bulky.

The first recorded use of the ghillie suit in combat was by the Lovat Scouts during the Second Boer War. This Scottish Highland Regiment was mustered by Simon Fraser, the 14th Lord Lovat. The first batch of troops for this motley band was drawn from gamekeepers, professional stalkers, and similar men of the earth who toiled on Scottish estates.

The Lovat Scouts were initially commanded by the Honorable Andrew David Murray with Lord Lovat as 2IC. After 17 months in action, Murray was killed and Lord Lovat took command at age 29. He served until the end of the war in 1902.

At the dawn of the 20th century military tacticians were still trying to define themselves in the age of long-range repeating rifles, high explosives, smokeless powder, and belt-fed machineguns. In the Lovat Scouts we find soldiers well informed in fieldcraft and marksmanship. When combined with some innovative leadership these rugged men ultimately changed the way wars were fought.

The Lovat Scouts were attached for a time to the Black Watch, but that relationship ended in the summer of 1901. A year later the Lovat Scouts returned to England and were disbanded. With chaos on the horizon in Europe, the Lovat Scouts were reformed in 1903 as two regiments. From these troops were drawn a group of dedicated sharpshooters that became the British Army’s first operational battlefield sniper unit. The unit was dissolved and reconstituted another time or two before finally finding itself deployed as two separate regiments in September of 1915 to Gallipoli.

The First War to End All Wars

The WW1-era Lovat Scouts Sharpshooters were formed into ten platoons. Each platoon was led by a commissioned platoon leader and consisted of 21 soldiers and NCOs. That first sniper unit totaled 220 specially-trained men. In a fairly prescient bit if tactical acumen, each platoon was subsequently attached to a particular Army Corps to be tasked out to subordinate units as needed.

These sharpshooters were indeed renowned for their facility behind a rifle. Their weapons were typically variations of the standard-issue Short Magazine Lee Enfield (SMLE) that equipped most of the British Army. The SMLE was itself exceptionally capable for its day. However, it wasn’t necessarily their facility as snipers that so endeared the Lovat sharpshooters to their supported units.

These early snipers were highly esteemed for their covert intelligence-gathering skills. On a battlefield bereft of drones and spy satellites, the accurate establishment of enemy locations and dispositions made the difference between success and failure. While using little more than 20-power spotting scopes these skilled warriors could offer great detail on enemy movements within ten miles and still offer reliable insights out to twenty. Major Vernon Hesketh Prichard, a legendary soldier and adventurer whose story we will no doubt explore eventually in this venue, was quoted as having said of the Lovat sharpshooters, “Keener men never lived…if they reported a thing, the thing was as they reported it.”

When faced with the prospects of protracted trench warfare, the British set out to equip their sharpshooters with precision rifles worthy of their mission. At first, these dedicated marksmen were equipped with a motley array of repurposed scoped hunting weapons. However, by 1915 the British government began mounting 3x and 4x scopes atop SMLE and P14 Enfield rifles. During the course of the war roughly 10,000 rifles were thusly converted. The optics on these weapons were not standardized until 1918.

Though the SMLE fed from a detachable 10-round box magazine, most loading was still undertaken by stripper clips from the top. As a result, early scopes featured offset mounts to allow access to the rifle’s action from above. Later versions were center-mounted to facilitate a more effective cheek weld. These weapons had to be either loaded from the bottom using magazines or loaded from the top one round at a time. A skilled rifleman was expected to fire between 20 and 30 aimed shots per minute.

The Short Magazine Lee-Enfield Mk I was first introduced in January of 1904. The SMLE’s 25.2-inch barrel represented the sweet spot halfway between that of the original Lee-Enfield rifle and the carbine version. The SMLE was distinguishable at a glance by the stubby little bayonet boss protruding just below the muzzle. The subsequent WW2-era Mk IV sported a small length of barrel at the nose. The definitive WW1 version of the rifle was the slightly-modified Mk III introduced in 1907. British Tommies affectionately referred to the SMLE as the “Smelly.”

The basic ghillie suit changed very little for nearly a century. If properly executed such a contrivance was almost unnaturally effective. However, those traditional burlap ghillies had their downsides.

Frayed burlap is notoriously flammable. On a battlefield contaminated with such vile stuff as white phosphorus, incendiary rounds, smoke grenades, and similar pyrotechnics the ghillie suit can be a simply epic fire hazard. Two snipers assigned to the 11th ACR burned to death during combat operations in Iraq when their ghillie suits were set ablaze. Additionally, burlap soaks up moisture like a sponge. Once a burlap ghillie suit gets wet it becomes unnaturally heavy. Wet burlap close to the skin for long periods in cool climes can precipitate hypothermia as well.

Modern sensors rely upon thermal detectors and IR imagers that can significantly degrade the effectiveness of traditional visual camouflage. While a generation ago such gear had to be mounted in the nose of an attack helicopter and cost as much as my hometown, nowadays thermal sights of surprising effectiveness are within financial reach of your typical middle-class pig hunter. As regards thermal technology, with each passing year the prices go down and the capabilities go up. Traditional ghillie suits don’t do much to conceal a person’s thermal signature.

While this might not seem like a big deal, a ghillie suit also attracts burrs and twigs like some kind of magnet. Once you’ve rolled around in the brush in one of these things for a while it becomes a gigantic mass of prickly crap. Most normal people wouldn’t care, but it’s impossible to keep a field-worn ghillie suit tidy.

We Americans have a well-earned reputation for smothering our problems in science and technology. In 2007 the US Army Soldier Systems Center undertook a program to develop an enhanced ghillie suit material. Where burlap or jute had all those detriments described earlier, this new stuff was purportedly water-repellent and fire-resistant. After extensive field testing at the Sniper School at Fort Benning, this new material was incorporated into the FRGS (Flame Resistant Ghillie System). Testing began in 2018 on the IGS (Improved Ghillie System), a modular design intended to be even safer, more comfortable, and more effective.

Though they have really changed very little over the past century, the ghillie suit remains an integral part of the modern sniper’s kit. Wherever men institutionally kill each other there will be precision marksmen decked out in fluffy earth tones creeping about in the brush visiting death upon their enemies. Born in South Africa in the late 19th century, the ghillie suit remains a timeless sniper tool even today.

How to Catch Loads of Trout With Simple Jigs