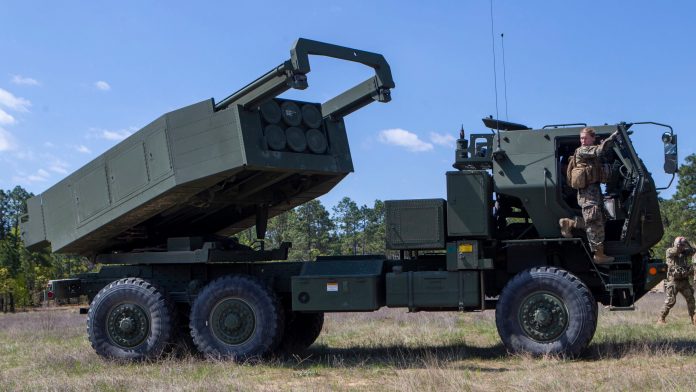 WASHINGTON: Ukraine will get four long-range multiple rocket launch systems as part of the United States’ latest $700 million security package to the embattled nation, the Pentagon’s top policy official announced today, a subtle shift in US posture that comes as fighting rages in Ukraine’s east.

The four High Mobility Artillery Rocket Systems — abbreviated HIMARS — are already prepositioned in Europe, said Undersecretary of Defense for Policy Colin Kahl during a briefing with reporters. After a three-week training period where Ukrainian forces learn to use and maintain HIMARS, the systems will be transferred into Ukraine.

However, use of the HIMARS systems come with an important caveat: Ukraine will only receive rockets able to traverse around 70 kilometers, and Ukrainian officials have promised to not use the system to strike targets within Russian territory, Kahl said.

“We had a back and forth with [Ukrainian officials] on this,” Kahl acknowledged. However, the US government ultimately assessed that HIMARS with medium-range rockets would be able to “service any target that they needed precisely. … We don’t assess that they need systems that range out hundreds and hundreds of kilometers for the current fight.”

RELATED: 5 lessons from the Ukraine conflict, according to the US Army secretary

Although the Lockheed Martin-made HIMARS has been at the top of the Ukrainian military’s wish list for weeks — as Ukraine clamors for long-range fires that can help fend off Russian forces trying to claim territory in Ukraine’s Donbas region — the United States initially held off on providing the system, wary of an escalation that would draw the war beyond Ukraine’s borders.

Asked why US officials had decided to supply HIMARS to Ukraine at this particular moment, Kahl replied that when fighting shifted to the Donbas, the first step was to move the Ukrainian military away from Soviet artillery and teach them to use US-made howitzers that have already been provided. Now, it can move on to training the Ukrainians on the more advanced HIMARS system.

“We’re not seeing the Ukrainian defenses buckle. They’re hanging on,” he said. “But it is a grinding fight. And we believe that these additional capabilities will arrive in a timeframe that’s relevant and allow the Ukrainians to very precisely target the types of things they need for the current fight.”

The mobile, truck-mounted HIMARS system is capable of launching up to six rockets at a time to strike targets up to 300 kilometers away, when its longest range projectiles are used, according to Lockheed’s website. However, Kahl noted that the rockets slated to be given to Ukraine, which reach about 70 kilometers, will still more than double the range of its artillery, as current howitzers top out at about 30 kilometers.

President Joe Biden appeared to reference the US decision to send HIMARS systems to Ukraine in an op-ed for The New York Times published on Tuesday night, writing that the US would “provide the Ukrainians with more advanced rocket systems and munitions that will enable them to more precisely strike key targets on the battlefield in Ukraine.”

In the op-ed, Biden said the US did not seek a wider war with Russia, and it was not “encouraging or enabling Ukraine to strike beyond its borders. We do not want to prolong the war just to inflict pain on Russia.”

The United States has provided about $5.3 billion in security assistance to Ukraine since the start of the Biden administration, with total of $4.6 billion given since Russia invaded the country on Feb. 24.

In addition to the HIMARS system, the latest arms package includes:

Notably, Kahl declined to provide specifics on how many rockets for the HIMARS systems would be included in the latest tranche of weapons, but added that the US could surge additional systems and munitions as needed.

Another important point: It’s unclear what — if any — repercussions Ukraine could face if it violates its agreement with the US and uses HIMARS to strike targets in Russian territory.

“We trust the Ukrainians will live up to those assurances,” Kahl said.

As Enterprise’s keel is laid, Navy and industry advocate for another aircraft carrier ‘block buy’