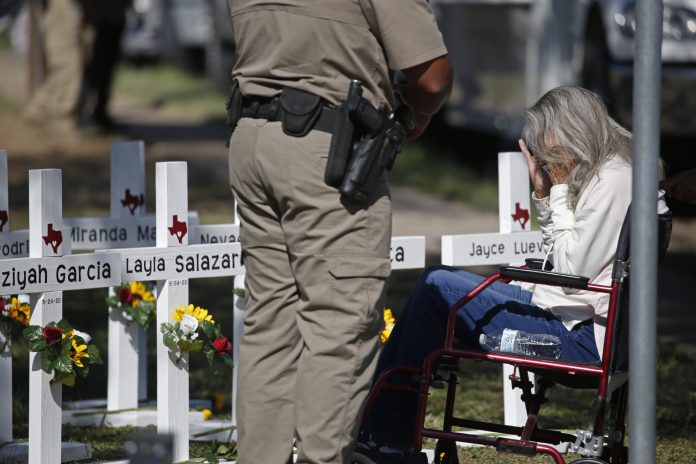 Post-Columbine, some high-profile examples of law enforcement interdiction of active shooters that came under critical scrutiny include:

Sandy Hook Elementary School, Newtown, Connecticut (December 14, 2012). After murdering his mother at home, 20-year-old Adam Lanza kills 26 victims at the nearby elementary school, including 20 children between six and seven years of age and six adult staff members. Though law enforcement faced initial criticism for its delayed (six-minute) response, a review by the Connecticut Police Chiefs Association determines that their actions were appropriate, as chaos at the scene led to impression of “exterior threats,” which later turned out to be a worried parent.

The FBI’s definition of an “active shooter” describes “one or more individuals actively engaged in killing or attempting to kill people in a populated area.” In a just-released report, the bureau designated 61 incidents in 2021 as active-shooter attacks; 30 attackers were ultimately apprehended by law enforcement, 14 were killed by police, 11 took their own lives, four were killed by armed citizens, one died in a motor-vehicle accident, and one remains at large.

According to the FBI, between 2000 and 2013, 66.9 percent of active-shooter incidents ended before police arrived; 69.8 percent ended in five minutes or less, and 36.5 percent ended in two minutes or less. The era of 1970s Dog Day Afternoon-style hostage standoffs is over. While police negotiators continue to play a critical role, the criminal paradigm shift to mass-murderers armed with high-powered rifles requires an evolution from painstakingly slow and methodical “law enforcement clears” (employing ballistic shields) to addressing the exigency in a more deliberative, committed, and rapid fashion.

Dynamic-entry tactics have existed for years. I was trained on them while serving on an FBI SWAT team and while assigned to the FBI’s Hostage Rescue Team throughout the 1990s; I headed the FBI’s Crisis Management Program in New York City during the 2000s. Dynamic-entry tactics incorporate the constructs of speed, surprise, violence of action, and a failsafe breach (either mechanical or explosive).

These tactics require additional training and resources and introduce additional risks to officers, but this is where we are today. Threats evolve. Law enforcement must counter them, no matter the cost in resources or the imperiling of our own lives. We simply must rush to the “sound of the guns.”

In this context, one of the most damaging and frankly nauseating explanations offered by police in the wake of the Uvalde attack came in response to a question from CNN’s Wolf Blitzer on Thursday. Blitzer’s guest, Texas DPS lieutenant Chris Olivarez, made the stunning admission that “if they [police] proceeded further without knowing where the suspect was at, they could have been shot, they could have been killed.”

For those who understand the business of hostage rescue, that statement made us wince. Cops are certainly not “machines”—they are human beings like everyone else—but they must master the process of managing their fears in the face of danger. Franklin D. Roosevelt said it best: “Courage is not the absence of fear, but rather the assessment that something else is more important than fear.” If we cannot assume those risks, then who will save helpless innocents?

— James A. Gagliano in Police Must Rush to the Sound of the Guns

New Boeing and Red 6 partnership could launch F-15EX, T-7 into the metaverse