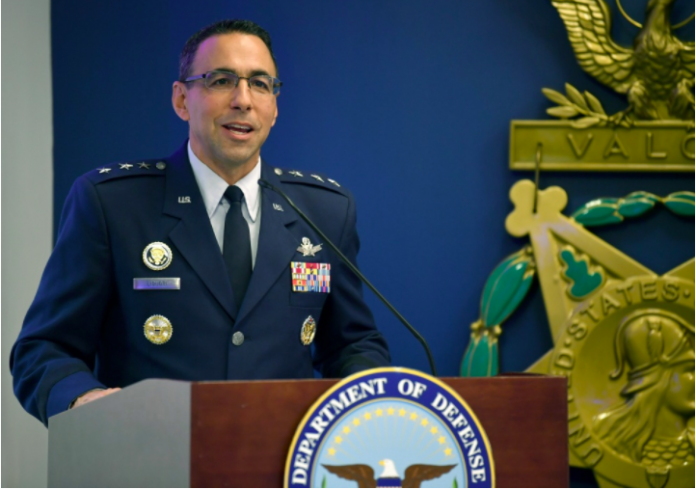 WASHINGTON: The Pentagon and the Intelligence Community are in “the middle” of a “space strategic review” due to the White House in “the late June/July timeframe,” according to Lt. Gen. Bill Liquori, the Space Force’s head of strategy, plans and requirements.

Liquori, whose formal (and unwieldy) title is deputy chief of space operations for strategy, plans, programs, requirements and analysis, told the Mitchell Institute today that the review was tasked to Secretary of Defense Lloyd Austin and the Director of National Intelligence Avril Haines by National Security Advisor Jake Sullivan.

He explained that two critical and inter-related issues are on the table. First, the Space Force’s balance of offensive and defensive weapons and capabilities to deter and, if necessary, defeat adversaries. Second, there’s the long-running debate over whether the US needs to de-classify information about both adversary threats and US capabilities to underpin deterrence.

“Everybody sees the growing threat, and we recognize the need for not only resilient architectures, but the Unified Command Plan tasks US Space Command with offensive and defensive operations, and now our own Capstone Doctrine document highlights that,” Liquori elaborated. “But we’ve got  to work that through the process. And so we’ll work force designs to talk about what mix of capabilities are needed.”

But determining that mix has to be done “within the bounds of policy,” he added, and the new strategic space review will be key in setting those bounds — as well as the constraints on what can and cannot be discussed in the public domain.

“I anticipate that that will set kind of our playing field, if you will, and define some of the policy aspects for this administration. Every administration gets to define their policies going forward. And so we’ll have a little bit more clarity as that wraps up,” Liquori said.

The push to declassify both adversary threats and US military space capabilities has been enjoined by senior national security space leaders over the past several years, growing louder and more public over that time. Before his retirement in November, then-Vice Chair of the Joint Chiefs of Staff Gen. John Hyten had been leading the charge within the Pentagon. He in particular argued that it is impossible to deter adversaries with invisible weapons.

Hyten’s mantra was taken up by his successor, Adm. Christopher Grady, during his confirmation hearing last December. And Space Force chief Gen. Jay Raymond has repeatedly argued against over-classification of all things national security space.

Supporters of de-classification have made headway in publicizing threats to US space assets, primarily from Russia and China — witness the 2019 and 2022 unclassified reports from the Defense Intelligence Agency on space threats. But not so much on US capabilities to counter those threats.

The new strategic space review isn’t being crafted in a policy vacuum, however.

Vice President Kamala Harris last December, at the first meeting of the National Space Council that she chairs, released the “United States Space Priorities Framework” designed to guide Biden administration space policy. That document puts building a more resilient military posture at the top of its national security priorities, along with improving the ability to “detect and attribute hostile acts” on orbit.

And in late March, the White House gave Congress a classified version of its National Defense Strategy, which centered on the new (and somewhat undefined, at least in the public domain) concept of “integrated deterrence.” According to DoD’s fact sheet on the strategy, integrated deterrence entails “developing and combining our strengths to maximum effect, by working seamlessly across warfighting domains, theaters, the spectrum of conflict, other instruments of U.S. national power, and our unmatched network of Alliances and partnerships.”

Liquori stressed that the Space Force has a key role in supporting integrated deterrence, and that the concept has played a key role in shaping its budget priorities. In particular, he said, the service’s much-touted pivot toward resilient architectures is aimed at that goal.

Further, Liquori said that the strategic space review will help further flesh out how the Space Force and the IC support integrated deterrence.

“The work we’re doing right now in that strategic review … that will also shape, going forward in the 24 budget and beyond, other things that we would do to contribute to integrated deterrence,” he said.