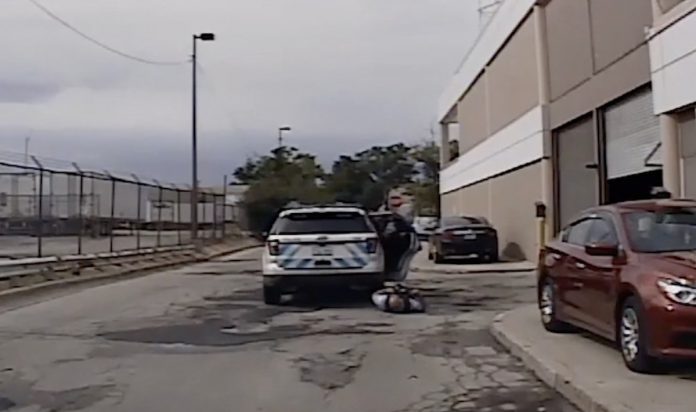 Last week, the oversight agency for the Chicago Police Dept. released graphic footage of a 2020 shootout between officers and a suspected carjacker.

The perpetrator, identified as Lovelle Jordan, was being transported to a local station on the morning of July 30th for processing after officers arrested him in a stolen Porsche.

Though bodycam footage shows them patting down Jordan and finding drugs in his pockets, the officers failed to discover the loaded pistol hidden near his groin area.

When the officers put Jordan in the back of the police car, handcuffed with his hands behind his back, he was somehow able to retrieve the firearm.

Officers opened up the door of the car at the station and that’s when Jordan began shooting.

Jordan was also shot in the melee and was subsequently left paralyzed.  He was no stranger to law enforcement.  Jordan was a convicted felon.

In April of this year, Jordan pleaded guilty to one count of attempted murder and five counts of aggravated battery to a peace officer, according to Fox32.  He was sentenced to 31 years in prison.

But his stay in prison didn’t last long.  Several days after his sentencing he died there, the Illinois Department of Corrections confirmed.

Realities of Carrying In Your Car -The Firearm Blog