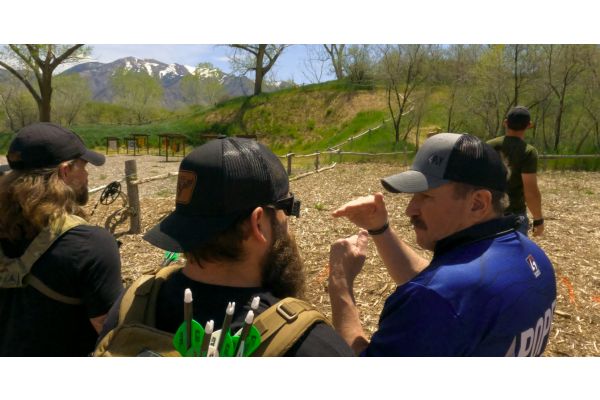 Pope and Young, America’s leading bowhunting organization recently partnered with Wishes for Warriors to introduce six veterans to the sport of archery.

During the 1st annual Inter-Mountain Bowhunters Bash Pope and Young volunteers and staff members spent the day introducing the veterans to the sport of archery, getting them acquainted with archery equipment, the process, and the fundamentals of shooting a compound bow.

The hands-on approach allowed each veteran to work directly with Pope and Young mentors and coaches, taking them through the process of setting up a bow, trimming arrows, and tuning their equipment.  After being properly outfitted, each warrior took to the range to learn the basics of bowhunting, including sighting in the bow, proper form, and ultimately taking the shot.

Given the chance to learn from world-class bowhunters, the Warriors were ready to take the hill and spend time on a 3-D course. It didn’t take long for the shoot to become competitive, but all of the participants had a blast, and the coaches absolutely loved getting to continue the coaching and encouragement on shot placement, range finding, and shooting up and down slopes.

“To train the very men and women who have sacrificed so much to ensure our freedoms and way of life is rewarding beyond measure,” stated Pope and Young Vice President, Dallas Smith.

That evening, through the generosity of Bear Archery and Trophy Ridge, Pope and Young then presented each warrior with their own bow during the evening BBQ dinner and auction.

Pope and Young wanted to give these Warriors not only the chance to learn and be introduced to archery for the first time but wanted them to be able to take what they learned and have a new hobby, a new passion, a new way of life.

“Pope and Young knows the power that archery and bowhunting has to change lives” stated Executive Director, Jason Rounsaville, “we are honored to introduce these warriors to the beauty of bowhunting, and in some small way repay them for the sacrifices they have made in defending our freedoms.”

ABOUT POPE & YOUNG:
The Pope and Young Club is North America’s leading bowhunting conservation organization. If you are a fair chase, ethical bowhunter, and you care about preserving the culture and future of bowhunting, then you belong to the Pope & Young Club.  Join today at www.pope-young.org .

Russia is ‘About to Run Out of Steam,’ MI6 Chief Says