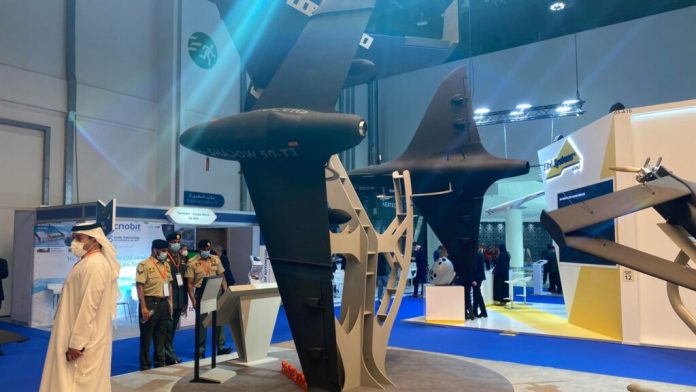 BEIRUT: As unmanned systems technology proliferates worldwide, Gulf-based companies are trying to elbow their way into the market not just with battlefield drones, but with those high-tech enough to use satellite links for longer-range missions.

“Even non-state sponsored groups such as Da’esh [ISIS] and Mexican drug cartels are now able to make effective battlefield drones. So, I expect every state in the region which has an interest in small, battlefield drones to be able to build their own drones almost as soon as they desire — definitely within the next decade,” David Des Roches, associate professor at the Near East South Asia Center for Security Studies, told Breaking Defense.

Beyond basic battlefield UAVs, officials from companies from the UAE and Saudi Arabia recently described their ongoing push to offer drones with satellite link capabilities for navigation. Marc Rickli, head of global risk and resilience at the Geneva Centre for Security Policy, suggested they’d find a market in Gulf governments beyond the obvious ISR benefits of long-range operations.

“It is also less risky for human operators that can operate from a safe distance. This can increase the incentive of using them as the potential political costs of losing the life of one’s own soldiers are reduced,” Rickli said.

Rickli noted the high-profile performance by the Turkish-made TB2 Bayraktar recently in Ukrainian operations against Russian forces – and how that was just scratching the surface.

“For instance, the Turkish TB2 drone has a range of around 150km. Drones relying on satellite communications have a far longer range of operations of several hundred kilometers,” he said. “The MQ-9 Reaper has a range of 1850km for instance.” (The Turkish firm that produces the Bayraktar reportedly suggested in 2020 that an upgraded version of its drone would feature a satellite link, but that’s not a feature the manufacturer currently advertises.)

That’s a market on which Gulf firms are hoping to make their mark.

“The Shadow is a family of loitering UAV systems that provide defense forces with a powerful, long-range, high-speed munition. The fixed-wing family delivers precision air-strike capabilities against fixed targets,” Saeed Al Mansoori, Halcon CEO told Breaking Defense. “The Shadow 25 and 50-TJ have a turbojet engine while the Shadow 50-P has a piston engine. These UAVs intend to swiftly neutralize stationary enemy targets.”

The RW-24 is a smart loitering munition that delivers autonomous ground strike capabilities against various types of targets. Equipped with GNSS, accuracy can be enhanced by upgrading its control system with an optical seeker head, he said.

Reach-S, meanwhile, is a medium-altitude, long endurance (MALE) UAV. It is suitable for intelligence, surveillance and reconnaissance (ISR) missions as it is a reusable platform.

Al Mansoori said each of the systems is being developed “solely” by Halcon, not using Western IP. He said the company plans to fly the drones by early 2023.

The company says all of the Halcon UAVs achieve beyond visual line of sight (BVLOS) control, even if their range is not much greater than that of the Bayraktar – each between 200km and 300km.

Al Mansoori didn’t specify the satellite Halcon’s UAV’S will be linked to, or how they will be secured from jamming, an added concern that comes with the satellite upgrade.

“Halcon’s UAVs are securely linked to satellites to be able to communicate with the operator or ground control station via GNSS,” Al Mansoor said. “These systems provide armed forces with a precision long-range, air-to-ground strike capability as well as actionable ISR. This is enabled through strong satellite-based navigation systems.”

“Integration of capabilities to link our UAVs to the satellites were done in cooperation with Taqnia Space, and test flights of Haboob UAV after the integration was successful and the drone was able to fly 200 km beyond line of sight due to satellite linking through its antenna,” director of Technology and Engineering Solutions, Asim Qureshi told Breaking Defense.

The Haboob, is a Saudi unmanned aerial vehicle, and it is a locally-built derivative of the Turkish drone Vestel Karayel-SU.

The two Saudi organizations are working on using SGS1 Nilesat, a satellite purpose-built for the Kingdom of Saudi Arabia, that’s expected to support military communication.

During WDS Intra Defense Technologies unveiled its Samoom UAV prototype. The company is working on outfitting the large UAV — weighing some three tons and stretching 24 meters wingtip to wingtip — with satellite communications to support its targeted 55 hours of flight.

While the interest in long-range drones may be high, drone makers and the militaries that use them will also have to contend with the new threats that come with the new tech, especially if the drones piggy-back on commercial satellites.

“Commercial satellites are not secure for military uses. If a military has a high-value target which they wish to protect from drones, they will employ electronic warfare measures – to include jamming – against drones and achieve a significant measure of success,” Des Roches said.

But even if it could be relatively easy for a prepared force to defeat drones, Des Roches said most regional security forces aren’t currently ready to take them on.

“So while GPS disruption, spoofing, jamming, and other electronic warfare measures will be successful as part of an integrated layered defense against drones, we are unlikely to see such measures in most security forces. Therefore, they will remain vulnerable to drone attack,” he stressed.

And whether Gulf nations buy into the satellite-enabled drones, Des Roche said he expects UAVs in general to have an outsized impact on military operations in the region for years to come.

“Drone technology has proliferated extremely rapidly, driven by miniaturization of electronics and cheap communications. Middle East states and non-state actors have the ability now to produce functional drones by combining commercial technology, even without reference to Western production engineering expertise,” he said.

Des Roches said that unmanned systems are primarily a disruptive technology, providing Middle East countries and non-state actors with a credible aerial capacity, if limited in range and payload.

“This means that countries who have invested heavily in conventional air forces will find some of that investment has lost its value, as even a relatively small non-state group will have the ability to target its ground forces from the air on a limited basis. Exacerbating this problem is the fact that most ground forces in the region are not trained in recognizing and reacting to unexpected threats,” he said.