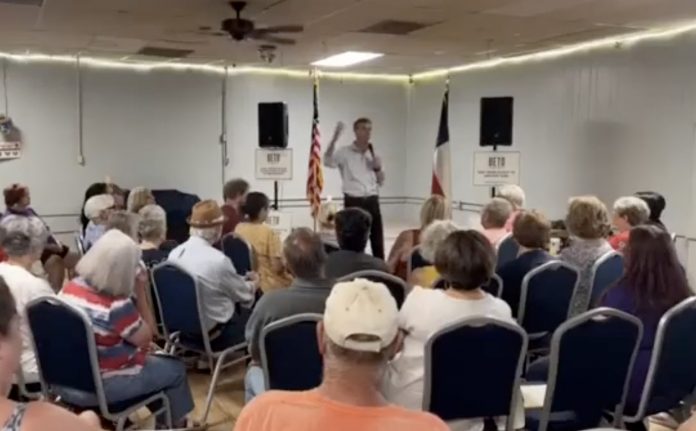 During a campaign stop in San Angelo on May 21, O’Rourke told groups of voters that modern sporting rifles have no place in civilian life.

“My kids are my conscience,” he said. “And I may win or lose this race, but I’m always going to have to face them and answer for what I’ve done or failed to do when I had the chance to do something. And I just took the position that may not be politically popular or maybe too honest that only should no one be able to purchase an AR-15 or an AK-47, because they’re designed to kill humans and that high-impact, high-velocity round will just tear up everything inside you. You’ll bleed out before we can get you back to life.

“But I don’t think that the people who have them right now in civilian use should be able to keep them,” he added.

Just several months ago, it appeared O’Rourke softened his stance on the issue in an attempt to curry favor with pro-2A Texas voters.

While visiting East Texas in February, the progressive politician told a crowd that he’s “not interested” in taking anyone’s firearms.

“I’m not interested in taking anything from anyone. What I want to make sure that we do is defend the Second Amendment,” he said (emphasis added).

Of course, prior to this, Beto made waves during a 2019 Democratic presidential primary debate when he vowed to confiscate AR-15s and AK-47s.

“Hell, yes, we’re going to take your AR-15, your AK-47,” he said. “We’re not going to allow it to be used against fellow Americans anymore.” The O’Rourke campaign immediately began using the clip to sell merchandise.

Even as late as Nov. 2021, Beto told The Texas Tribune that he “won’t be backing down from his message on guns” and “people shouldn’t have access to assault rifles.”

“I think most of us also understand that we should not have military-style weapons used against our fellow Texans,” he said.

That is one giant flip flop! It’s hard to overstate how big of a 180 Beto did.

But, if that doesn’t give Texas voters enough reason to pause, perhaps his antics at the recent press conference in Uvalde will.

As GunsAmerica previously reported, Beto showed up there unannounced to blame Gov. Greg Abbott and other grieving leaders for the horrific tragedy at Robb Elementary.

Many argue it was a shameless attempt to turn a solemn affair into a publicity stunt to grab headlines and gain notoriety for his campaign. See Fox News’ Greg Gutfeld’s editorial below: