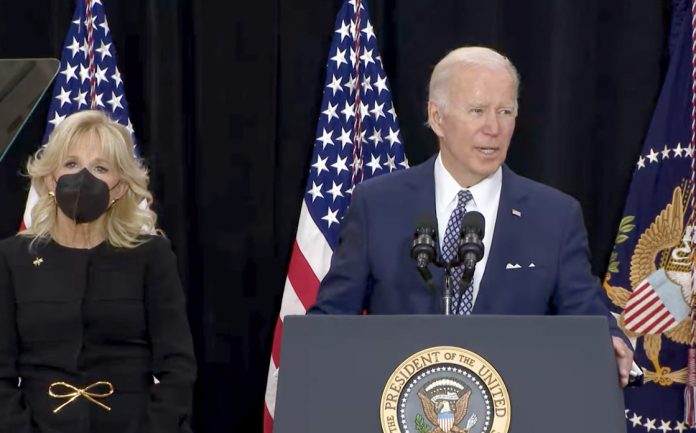 When president Joe Biden was leaving Buffalo on Tuesday, he was asked about adding a “domestic terrorism statute” to the books as a means to help stop mass killers.

“Well, we have enough laws on the books to deal with what’s going on now.  We just have to — we have to deal with it,” replied Biden, before boarding Air Force One.

“Look, part of what the country has to do is look in the mirror and face the reality.  We have a problem with domestic terror.  It’s real,” he added.

Biden is rarely coherent so it wouldn’t be all that shocking if he reversed course on this statement in the near future.  That said, it’s worth reflecting on for a moment.

There are plenty of existing federal, state, and local laws that ban murder and terrorism.  Adding more would be redundant and not helpful to the underlying problem — stopping determined killers.

See the problem is that laws, for the most part, work retroactively as we all know.  They provide a framework for prosecutors to charge individuals accused of committing crimes.  That is, after the law’s been broken.  After the victims have been slain.

With respect to the mass killing at the Tops Friendly Market in Buffalo on Saturday, the perpetrator broke numerous laws when he fatally shot 10 people and wounded 3 more.  The law, which under federal guidelines can carry the death penalty for murder in the first degree, was not enough to deter or thwart this allegedly racist actor.

The same is true for the numerous gun laws the individual broke.  New York bans 30-round magazines yet he used them during the attack on Saturday.  He also illegally modified the receiver of his rifle to accept detachable magazines.

“Since I live in New York, I had to buy a cucked version of this before illegally modifying it,’’ the suspect wrote in his manifesto about the attack. “Since I live in cucked New York, and I am only 18, I can’t legally buy a lower or a standard ‘assault rifle.’”

The perp continued saying that he “could’ve even bought a NY-SAFE featureless rifle, but what kind of cuck does that?”

It should be abundantly clear that no law, or set of laws, was going to stop this individual. But unlike his stance with respect to a new terrorism statute, Biden told reporters he wants to reinstitute a ban on so-called “assault weapons.”

“I’ve got to convince the Congress that we should go back to what I passed years ago,” Biden said, apparently referencing the ’94 ban on black rifles.

Biden, by his own logic, should recognize the futility of this approach.  More gun control will not stop determined killers.  We have all the laws we need to hold these individuals accountable.

What we need are more hard targets. More heroes like Tops’ security guard Aaron Salter, Jr., a retired police officer, who used his own firearm to engage the shooter.

Tragically, Salter’s attempt failed to stop the perp because he was wearing body armor but authorities still recognize that the security guard saved lives even though he lost his in the process.

Armed resistance from would-be victim works. Even the killer himself was aware of how New York’s gun laws chill the 2A rights of potential civilian responders, rendering them less capable to thwart an attacker.

“Plus NY has heavy gun laws so it would ease me if I knew that any legally armed civilian was limited to 10 round magazines or cucked firearms,” he said in his manifesto.

The softer the target the more emboldened the killer feels. We should be doing everything in our power to make it harder for these killers to take innocent lives. And that starts with getting more good guys and gals to exercise their 2A rights.

Sadly, many of those in power want to do the opposite. They want to keep responsible citizens from bearing arms in public.