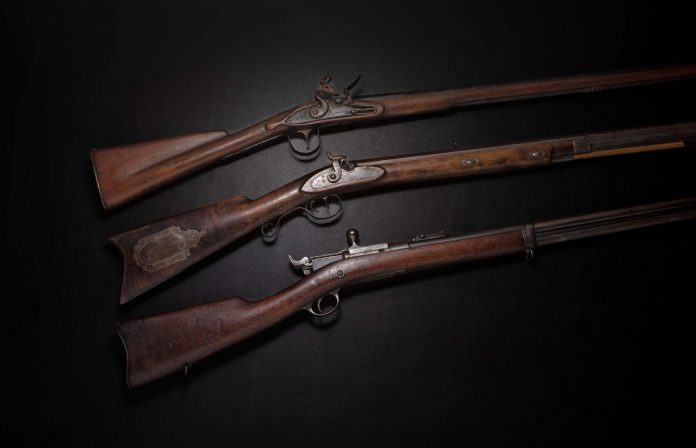 Assembled Over the Course of Nearly 50 Years, the Collection is One of the Most Comprehensive Offerings of Native American Used and Related Frontier Era Arms to Ever Come to Market.

On June 8, Cowan’s Auctions will offer one of the largest and most complete collections of Native American related and used firearms in its Frontier Firearms from the Lifetime Collection of Larry Ness auction. Ness spent five decades assembling this carefully curated collection that meticulously tracks the development of firearms from the earliest days of western expansion by American settlers to the dawn of the 20th century. This auction provides a rare opportunity for collectors of historic arms to acquire truly unique and historically significant items that are not often brought to market.

“Cowan’s is honored to bring the lifelong collection of Larry Ness to auction,” shared Cowan’s Director and Specialist for Arms & Armor Tim Carey. “As one of the premier collectors in the category, the collection shows the dedication to quality Larry has spent a lifetime pursuing.”

The Go-To Guy for Frontier Firearms

Larry Ness’ interest in weaponry began at a young age. As a kid growing up on a farm in South Dakota, he was rarely seen without his trusty jackknife and slingshot, and quickly became the bane of any gopher or rabbit that dared to step foot in the Ness gardens. His first collecting passion was the arrowheads and stone hammers that would turn up on the family lands. When his father told him it was time to go pick up rocks in the field, Ness would bound out the door hoping to find his latest treasure.

By the time he was an adult, Ness had begun collecting firearms. The firearms presented in the June auction represent over 50 years of buying, trading, and shows that led to him becoming one of the most respected names in frontier firearms.

“Larry Ness has been a valuable customer and friend of Cowan’s for almost 25 years,” commented Wes Cowan, Founder of Cowan’s and Hindman Vice-Chair. “We’re honored that he has entrusted his remarkable collection to us, and look forward to passing along these valued arms of the fur trade and frontier period to other afficionados.”

From the earliest days of European settlements in North America, firearms were a key commodity when trading with Native Americans. By the 18th century, gunsmiths both in England and later in its American colonies were producing firearms strictly to be traded to Native American tribes. Unlike the European colonists who rarely strayed far from their settlements, many Native American tribes frequently traversed large swaths of territory and therefore needed smaller, more lightweight firearms that could easily be sheathed on horseback but still had enough stopping power to contend with bears or other treacherous animals they may come across. These specially made firearms became colloquially known as “trade guns.”

As the lucrative fur trade took off in North America, fur companies began selling firearms manufactured specifically for Native American, European, and American trappers alike. Like the earlier trade guns, these firearms, which would become known as “northwest trade guns” were designed to be lightweight, able to stand up to harsh weather conditions, serviceable, and, perhaps most importantly, cheap.

The Ness Collection features a number of trade rifles including several northwest trade rifles by the two largest manufacturers: the Hudson’s Bay Company and the American Fur Company.

Perhaps no place was better known for the manufacturing of frontier arms than St. Louis. The city boasted numerous well-known smiths but perhaps none were more popular than brothers Jacob and Samuel Hawken and their crosstown rival Horace E. Dimick. Unlike the lighter, typically smoothbore Trade Gun, the St. Louis Plains Rifles were much more robust and typically incorporated a heavy octagonal rifled barrel, often measuring more than one inch across the flats, which was intended for accurate long-distance shooting. The Ness Collection features ten rifles from these acclaimed makers including an extraordinary pair of percussion plains rifle by Samuel Hawken (lots 161 and 162; each estimated: $40,000 – $60,000), a rare Hawken marked Spencer Carbine with alterations to a heavy barreled plains rifle (lot 193; estimate: $10,000 – $20,000), and an essentially untouched example of a Dimick plains rifle (lot 166; estimate: $8,000 – $10,000).

Among the highlights of the auction is a Winchester 1st Model 1876 Rifle with extensive documentation suggesting that it was taken from Sitting Bull’s cabin on the day of his death (lot 226; estimate: $40,000 – $60,000). The

rifle was supposedly recovered from Sitting Bull’s cabin on the day that he was killed during a botched arrest attempt by US Indian Police. The rifle along with other weapons recovered that same day were turned in to Standing Rock Reservation Indian Agent Major James McLaughlin.

Perhaps the most famous Native American leader, “Sitting Bull” is actually a mistranslation of his name Thathanka Iyotake, which in Lakota should translate to “Buffalo Who Sits Down.” He rose to prominence for his military campaigns against the United States and steadfast refusal to sign treaties and cede Native lands to the US government. This culminated in one of the most famous battles in American history at the Battle of Little Big Horn, where the 7th Cavalry under the command of Lt. Col. George Armstrong Custer, attacked Sitting Bull’s camp and was soundly defeated.

Fearing a swift and vicious response from the US military, Sitting Bull led his followers to Canada but harsh conditions and dwindling supplies forced him to surrender himself at Fort Buford in the Dakota Territories five years after the battle. In the years after his surrender, Sitting Bull would join several Wild West shows, including Buffalo Bill Cody’s, and was able to make a good sum of money to send home to his reservation. In 1890, however, Indian Agent McLaughlin blamed Sitting Bull for a recent religious revival on the reservation and, fearing it would lead to an uprising, ordered the arrest of Sitting Bull. Alarmed at the attempted arrest, Sitting Bull’s supporters gathered at his cabin vowing to protect him. A skittish Indian Police lieutenant shot Sitting Bull in the chest during the ruckus and he would die from his wound that night. It was that evening that McLaughin ordered the seizure of all weapons in Siting Bull’s Cabin.

The June 8 Frontier Firearms from the Lifetime Collection of Larry Ness auction will be held at Cowan’s new Cincinnati saleroom at 5030 Oaklawn Drive. Bidding will be available in person, over the phone, and live online on Cowan’s bidding platform Cowan’s Live along with other third-party bidding platforms. Preview is available June 6-8 or by appointment. Please visit the auction page or view the catalogue for more information.