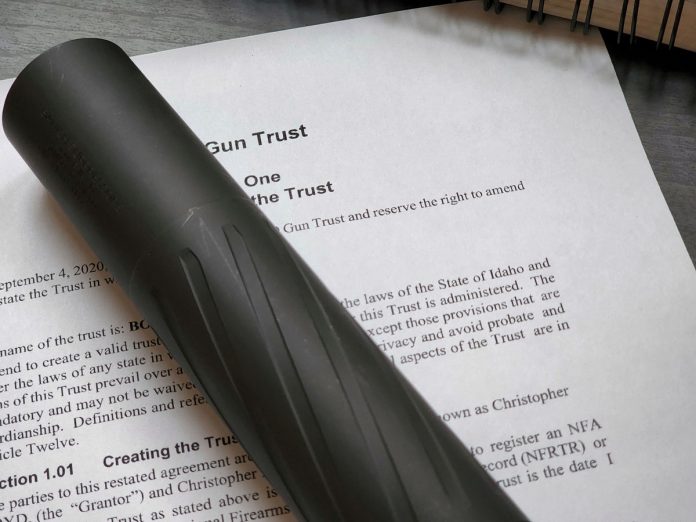 Should you use a gun trust for buying a suppressor?

As an attorney, I’ve seen other attorneys charge exorbitant amounts of money to create gun trusts for people. Usually, these attorneys focus on death, inheritance, avoiding probate, legal pitfalls, and ease for executors of the estate as the major reasons for using a gun trust. While I agree that those are certainly benefits of having a gun trust, I think they’re only fringe benefits and rarely worth the extra hassle for the average suppressor owner. Also, those trusts are often overly complicated and do more than what most of us need a gun trust to do. That being said, only you know what state you live in and your specific situation. Personally, I’d rather focus on the benefits of a gun trust while I’m alive. It’s someone else’s problem when I’m dead!

Let’s be totally honest, using a gun trust increases the amount of paperwork you have to submit to the ATF each time you purchase a suppressor. It’s more to think about, juggle, and keep track of.

The reason I personally want all my suppressors and machine guns in an NFA/Gun Trust is simply for this one reason: it makes it possible for other people to legally possess my suppressors, SBR’s, or automatic guns.

When you set up your gun trust you can designate specific people to be co-trustees on the trust. These co-trustees can possess the NFA items without you being present. For example, I could add my dad to my trust as a co-trustee and he could then take a suppressor hunting and I wouldn’t need to be there with him. The same thing could apply to a spouse, son/daughter, or friend.

If you registered individually (didn’t use a trust or corporation), nobody, not even spouse or family members, should have access to your NFA items without you being there and in control of the item.  Put another way, your spouse shouldn’t have the combination to the safe that the NFA item is in while you’re not at home or in control of the item.

If you purchase an NFA item individually and then later get a trust, those items do not become part of the trust unless you transfer them using a Form 4 and pay the ATF another $200 to transfer it to your trust. If you think you might someday want a trust, just start with one. Many companies like Silencer Central include one in your purchase of a suppressor for free.

For every person that you list on your trust as a responsible person or co-trustee, the ATF is going to require proof that they are entitled to possess firearms. Meaning they can’t be federally prohibited persons. To prove this you’ll have to send in passport photos, fingerprints, and a responsible person questionnaire.  The ATF will use that information to conduct background checks.

Gun trusts that are well written will have the ability to add or remove co-trustees at any time. One option is to remove all trustees each time you purchase an NFA item and before you send in your application and trust. After the item has been approved by the ATF and you’ve received your new stamp, add your trustees back to the trust and you can avoid the fingerprints, passport photos, and background checks for the co-trustees. You’ll still have to send them in for yourself.

It’s up to you to make sure you don’t add people to the trust that are federally prohibited (see below for the list). Also, it’s important that you not send your NFA items to/with co-trustees to states where they’re illegal.

The Gun Control Act (GCA), codified at 18 U.S.C. § 922(g), makes it unlawful for certain categories of persons to ship, transport, receive, or possess firearms or ammunition, to include any person:

The GCA at 18 U.S.C. § 922(n) also makes it unlawful for any person under indictment for a crime punishable by imprisonment for a term exceeding one year to ship, transport, or receive firearms or ammunition.

What about a corporation?

Corporations work similarly to trusts. You have to file one with your state and do the taxes each year. Only officers of the corporation can possess the NFA items. My personal opinion is that they are inferior for NFA items when compared to a gun trust.

If you filed with the ATF for your suppressor as an individual (no trust) you cannot lend your suppressor to anyone or leave it with anyone, including your spouse, without you being physically present. No exceptions.

If you filed using a good quality gun trust, you can allow those listed as responsible persons in the trust to possess or borrow your suppressor. You can also add or remove those people at will. You must ensure that none of them are federally prohibited persons.

Using a gun trust is almost necessary unless you will be the only person that ever uses your suppressor.

How to Fish for Striped Bass in Summer