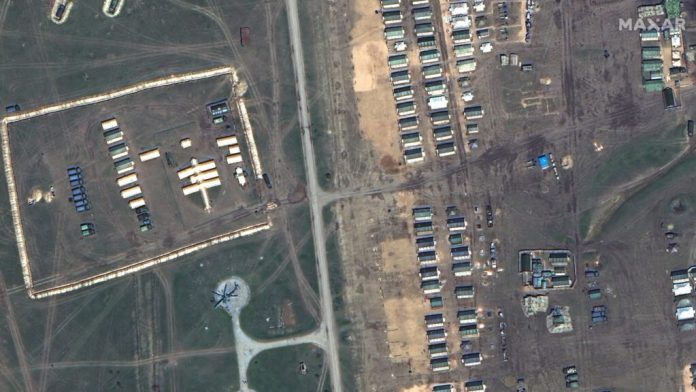 The “needs memo” is a first step towards sorting out how to divide responsibility between the Space Force and the Intelligence Community for development, acquisition and operation of ISR-gathering satellites — a thorny issue that involves turf, money and serious congressional powerbrokering.

The game plan is to have the draft memo, which has been approved by Space Force vice chief Gen. David “DT” Thompson, to the Joint Requirements Oversight Council (JROC) for its approval “in the coming months,” Liquori told the Mitchell Institute on Thursday. “This is the first one of a kind, we’re kind of giving it a little bit of time to work through.”

The JROC’s validation would be “a starting point for integrating all of the joint requirements for space-based ISR,” he said — which in itself is something of a first as coordination across the services and among DoD agencies on space acquisition traditionally has been a Byzantine process and only partially successful. (That fact was one of the prime motivators for Congress in approving the creation of a Space Force in the first place.)

And once the JROC, led by Vice Chairman of the Joint Chiefs of Staff Adm. Christopher Grady, approves the draft needs document, it will help shape DoD’s fiscal 2024 budget.

Liquori explained that the memo will lay out “here are all of the DoD’s space-based ISR requirements. After JROC’s review, the next step will be a “gaps analysis” to detail what capabilities needed today and tomorrow are lacking, and establish whether those should be filled by the Space Force or the IC.

It is clear “a large portion” of current needs are being, and will continue to be, met by the IC, he stressed. “We don’t want to replace that,” he said. But once the gap analysis is complete, the Space Force believes “there will be a subset that’s left over, and that would be Title 10-type capabilities that it makes sense for us to go do.”

Liquori, Space Force deputy chief of space operations for strategy, plans, programs, requirements and analysis, heads up the new Integrated Process Team (IPT) — which includes representatives of all the other services, the combatant commands, the Joint Staff and the Intelligence Community — conducting the ISR assessments.

The IPT is an outgrowth of the decision last June by the Joint Requirements Oversight Council (JROC) to tap the Space Force for a new role as the lead “integrator” for all joint space requirements, he explained.

The IPT in part will clarify the boundary between the responsibilities of National Reconnaissance Office (NRO) and the National Geospatial-Intelligence Agency (NGA) to provide ISR data and analysis from spy satellites to military commanders, and the Space Force — which has made clear its ambition to take over doing so for so-called tactical ISR.

Senior service officials have been arguing that given the vast improvements in Russian and Chinese aerial denial capabilities, it only makes sense to move some of the tactical ISR mission from airborne platforms to satellites, and for the Space Force to assume responsibility for acquiring and operating those space-based assets.

That would in effect split the space ISR mission into a strategic component, handled by NRO, and a tactical component overseen by the Space Force — although senior leaders are quick to explain that such a move should not be seen as a claim jump by the newest service.

“This is not designed to replace the National Reconnaissance Office or the National Geospatial-Intelligence Agency or any of the other elements of the IC, but we do believe — General Raymond does, as well as [Air Force Secretary Frank Kendall] — that there will be a piece of intelligence surveillance and reconnaissance that maybe we’ve done in the air domain previously, that only makes sense to move to the space domain,” Liquori said.

Further, he said, there is an “insatiable demand” for ISR from military commanders and a need for resiliency in how that demand is met, leading to a need for increased capability.

The IPT needs analysis in effect will look at that demand side, and a subsequent gap analysis will show what capabilities are missing in the current IC and DoD space ISR force structure, Liquori explained.

From Analysis To Acquisition

Like the needs assessment, the gaps analysis will be done by DoD and the IC working together, Liquori said. The idea is to figure out “what is it that the IC is currently planning to budget for and how much of those requirements can they cover, so that we understand the piece that would be complimentary from a Department of Defense perspective.”

Further, the service’s Space Warfighting Analysis Center is currently working on a force design for a space-based ground moving target indicator system, Liquori said, and NRO is participating in that exercise as well. That effort to figure out what such a system would entail technology-wise and how it would fit in with current capabilities is running “in parallel” to the IPT process, he noted.

Once these efforts are completed, the next step would be to move into the acquisition process, beginning with the new(ish) Program Integration Council, which was created to coordinate DoD space agency budgeting to avoid overlaps and duplication. The PIC includes the Space Force’s Space Systems Command, NRO, the Space Development Agency, the Missile Defense Agency, the Space Rapid Capabilities Office, and the Air Force Rapid Capabilities Office.

The PIC, Liquori said, “then feeds to the Space Acquisition Council, which is called for by law. It’s run by our space acquisition executive, Mr. Frank Calvelli, who’s just joined. The director of the National Reconnaissance Office as a part of that forum. So there’s another touch point where we compare notes.”

Meanwhile, Space Systems Command (SSC) from May 19 to 20 held a “reverse industry day” with the Aerospace Industries Association to suss out what commercial technologies might be brought to the ISR table.

Col. Rich Kniseley, chief of SSC’s Core Team, told Breaking Defense on June 1 that there were “over 35 companies from both the traditional and non-traditional side.” Further, he said, “We had a great mix of many different agencies” including representatives from the SWAC, NRO and NGA.

Liquori said that he anticipates that commercial capability will be a part of the ISR force mix, noting that such “hybrid approaches certainly give us more flexibility” as well as resilience. Further, he said, there are a “plethora” of firms getting into the commercial remote sensing business.

“It would be short sighted so as not to leverage what’s out there,” Liquori said. “So, I would anticipate that the combination of commercial and government — of Title 10 and Title 50 — will be what the nation needs, and what the nation will have going forward.”

The U.S. 1st Marine Division landed on the island of Peleliu.

Marines Look To A Future Where More Authority, Intel Moves to the Edge