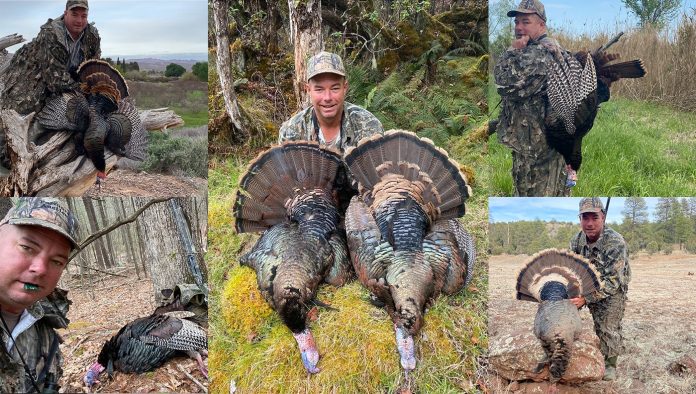 Chip Davis started hunting turkeys on his family farm in Grenada, Mississippi, in 1985, when he was 15. In 1992, he began chasing his first grand slam, which involves bagging a turkey from all four U.S. subspecies—Eastern, Merriam’s, Osceola, and Rio Grande—a feat he has since repeated on multiple occasions, sometimes in a single season.

Next Davis set off on a truly epic quest: harvesting a mature gobbler in each of the 49 U.S. states that have wild turkeys. Known as a U.S. Super Slam, this feat took Davis 30 years to complete, and he wrapped it up with a successful hunt this spring in West Virginia. Completing the most exhaustive of the six turkey slams recognized by the National Wild Turkey Federation puts Davis in elite company. According to NWTF, only 14 hunters have completed and registered a U.S. Super Slam in their records database. Davis will be the 15th. We got a chance to talk with Davis at the end of last month. Here’s our Q&A.

What made you want to go for a Super Slam in the first place?

When I first heard about this, in the 1990s, we didn’t even call it a Super Slam. It was just called shooting a turkey in every state that had one. I was not aware of anybody who had ever done it, which was part of the appeal. But mostly, I was enjoying the turkeys, enjoying the travel, and I was learning something new on every trip, so it fell right into my wheelhouse.

Oh, absolutely. A lot of times I thought, Why did I pick a passion that is so hard? But I think successful people, whatever goals they choose, are persistent. Whether it’s turkey hunting, building a business, or raising a family, the principles are the same. I was able to do this because I kept at it, not because I’m some kind of great turkey hunter. I’m not. If there’s one message I want to get across, it’s encouraging people to get off the couch and chase their own adventure, no matter what it is.

You did a lot of hunting on public land. What do you look for when searching for good public ground for turkeys?

The only difference between public and private land is pressure. If you can find a way to take the pressure off on public land, it’s just like hunting private. That can certainly mean putting miles on boot soles, by getting way back in there, but sometimes it means identifying that one overlooked, obscure spot that looks like it doesn’t really belong to a certain national forest or WMA. Study your maps, and then take a few minutes to ground-truth it when you get there. If I’m hunting a big public area, like Mark Twain National Forest, I’ll ride and then stop and call. If I don’t see a turkey or hear one gobble, I keep going. Same on private land: I didn’t waste my time knocking on a door unless I saw a turkey on the place.

You certainly knocked on a lot of doors: What was your most successful ask?

This one trip, I had three or four days blocked out for an Oklahoma hunt. Opening morning, I shot a bird at daybreak and an hour later I was on my way to Kansas. I saw turkeys and knocked on several doors in southern Kansas, but the answer was no. That afternoon I saw a strutter, so I stop. “Sir, my name is Chip Davis, I’m on a quest to shoot a turkey in 49 states, and I noticed a gobbler right back here.” He said he doesn’t typically let anyone hunt, so I thanked him, turned around, and started walking to my truck. Then he said, “I tell you what, it’s kind of intriguing what you’re doing. I’ll let you hunt this afternoon.” The strutter was right around the corner. I walked in, 15 minutes, boom—got my Kansas bird.

So, multiple states in one day—did that happen often?

No, but it happened more than once. One of my best memories was the Dakotas. I shot two birds in North Dakota before breakfast, then made a two-hour drive to South Dakota and shot a bird early in the afternoon. So, I had a chance to shoot four birds in two states in one day. That evening I passed on another bird because it would have been a 60-yard shot, and I’m glad I did: I roosted him and came back the next morning at daylight and knocked him out.

I’m sure they weren’t all that easy. What was your toughest hunt?

I thought I was going to die in Nebraska. I’m walking through knee-deep snow, and I could not believe it, but turkeys were actually gobbling. I didn’t get a bird that day, but I did roost them, so I knew exactly which tree I needed to look for in the morning. I started back to my truck, but I never cut my old tracks. This was early days, no GPS, just a compass. Finally at 10 p.m., I couldn’t feel anything from mid-thigh down, and I was lost. No idea where I was. I’d been arguing with my compass, but then I decided to trust it and I ended up walking out of the woods within 120 yards of my truck at 1:15 a.m. I didn’t even try to get up and hunt at daylight the next morning. Instead, I drove to some big-box store and bought hand-warmers and knee-high boots, and within about 45 minutes of getting back out to the roost tree, I shot a gobbler.

Where was your most scenic hunt?

Oregon. I was in a 70-acre meadow that was covered in blue wildflowers, gorgeous mountains all around. There was a gobbler coming, but he was still 120 yards off. From the corner of my eye, I saw movement and thought maybe another turkey had slipped in. But, no, it was a big cow elk with this little bitty, wobbly kneed calf that couldn’t have been more than a day old. They stopped 30 steps in front of me. The calf nursed for a few minutes, and then I watched them walk into the woods. I was so caught up in all this that I’d forgotten about the turkey, and when I looked back he was 40 yards away. I barely had time to start clucking and purring. He went into full strut, and I dropped him almost in the footprints of where those elk had stood.

You were constantly eating on the road. So, where did you find the best and worst food?

At the risk of making a lot of people mad, the worst food is north of the Mason-Dixon Line. The farther north you go, the worse the food gets. The best is from this hole-in-the-wall seafood place in Alexandria, Louisiana, called Robbie G’s, which serves the absolute best crawfish I’ve ever had, and I’m a crawfish connoisseur. I ordered 5 pounds and then another 5 pounds and then I ordered another 10 pounds after that! Anytime I’m within 30 miles, I go out of my way to eat there.

Which state has the most talkative turkeys?

Anyplace with Rio Grandes—but especially Nevada. In an hourlong hunt there, I heard probably a thousand gobbles. It was 30 to 40 turkeys gobbling, and they were nonstop, just screaming.

There are some turkeys that are easier than others, but I don’t think I ever met a dumb one. Earlier this year, in Hawaii, I had a really smart turkey followed by a really easy one (pictured above). The gobblers were henned up, and I was on this one bird more than four hours before I finally got him. It was a really fun, challenging hunt. Afterward, my friend and I were sitting on the truck tailgate, eating a sandwich, planning where to hunt the next morning, when we heard a gobble 80 yards away. I laid my sandwich down, grabbed my vest, walked 40 yards into the woods, sat down, and called one time. That tom walked over a little ridge and was practically blowing leaves on my feet. I wanted to make him gobble at least once. So I clucked, and, sure enough, he gobbled. Was he a dumb turkey? I think I was just lucky to be in the right place at the right time.

I bet I can guess which state has the smartest turkeys.

Hands down, the most difficult I’ve ever hunted in my life are right here at home in Mississippi. I might even include Alabama in that. Public-land turkeys all across the South are a tough because there are just so many people chasing them.

What was the craziest thing that happened to you on the road?

In Rhode Island I paid a trespass fee to hunt an 8,000-acre block of land for one day. I got there and it was more like 800 acres. There were “No Trespassing” signs on every other tree, and I didn’t hear any turkeys. So, I texted the guy and he got back, saying, “If you don’t like that property, try this one,” along with another address. Walking back to my truck, I actually heard a turkey gobble and was able to call the tom up and kill it. So I left Rhode Island and drove all the way to Maryland to hunt with a buddy. The next morning at daylight, I’m calling up a gobbler when I get a text from the guy in Rhode Island, who knew I’d already gotten RI bird. He says, “You sorry SOB. I sent you directions to my other place, and now I see your truck there. I got a posse of buddies, and we’re about to come in the woods and whoop your a**.” I was about to send him a screenshot of my location where I was sitting in Delaware, but I thought better of it. Instead, I texted back, “Catch me if you can, you sumb****.” I admit I did feel bad for whoever was driving that white pickup in Rhode Island that morning.