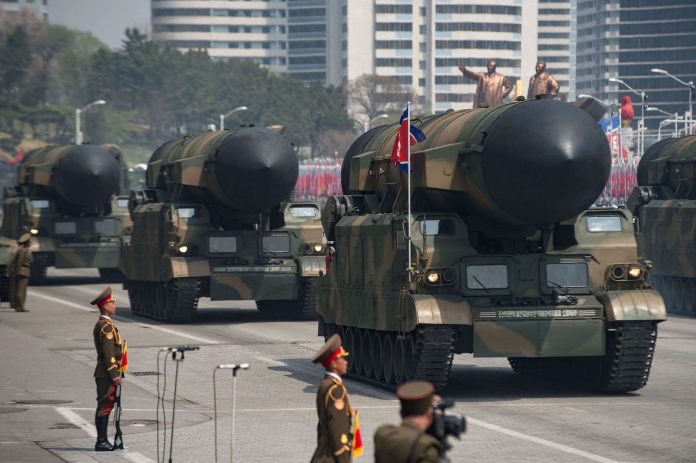 North Korea on Thursday skipped the diplomatic niceties for a combative tone when it took the helm of the Conference on Disarmament.
“My country is still at war with the United States,” declared Pyongyang’s ambassador Han Tae-Song.

Around 50 countries voiced their outrage that unpredictable nuclear-armed North Korea is being tasked with chairing the world’s most foremost multilateral disarmament forum for the next three weeks.

North Korea took over the rotating presidency of the Geneva-based CD, according to a decades-old practice among the body’s 65 members following the alphabetical order of country names in English.

But despite the automatic nature of North Korea’s presidency of the conference, dozens of non-governmental organisations had urged countries to walk out of the room in protest.

There was no dramatic exit, but many nations opted to send only lower-level diplomats, while the United States, the European Union, Britain, Australia and South Korea, among others, took the occasion to chastise Pyongyang over its numerous ballistic missile tests and feared preparation for a fresh nuclear test — the first since 2017.

“We remain gravely concerned about the Democratic People’s Republic of Korea’s reckless actions which continue to seriously undermine the very value of the Disarmament Conference,” Australian Ambassador Amanda Gorely said, speaking on behalf of the group of countries.

Not ‘tacit consent’
The decision to remain in the room should not in any way be interpreted as “tacit consent” of North Korea’s violations of international law, she insisted.

“It certainly does call that into question when you have a regime like the DPRK in a senior leadership post, a regime that has done as much as any other government around the world to erode the non-proliferation norm,” he said, referring to the North by its official name, the Democratic People’s Republic of Korea.

North Korea, one of the most militarised countries in the world, has carried out a number of missile tests since the beginning of the year.

The US and South Korea say it fired three missiles, including possibly its largest ICBM, hours after President Joe Biden closed a visit to the region late last month.

And the US and others have warned Pyongyang is preparing its first nuclear test in five years.

After repeatedly “taking note” as president of the criticism, ambassador Han took the floor in his national capacity to insist on North Korea’s right to defend itself against US “threats”.

Pyongyang, he pointed out, remained officially at war with the United States since the 1953 ceasefire that ended combat and split the Korean peninsula.

“No country has the right to criticise or interfere in the national defence policy” of North Korea, he said.

The CD which is not a UN body but meets at UN headquarters in Geneva, is a multilateral disarmament forum that holds three sessions a year.

It negotiates arms control and disarmament accords and focuses on the cessation of the nuclear arms race.

How To Take Back Your Weekend After A Slump