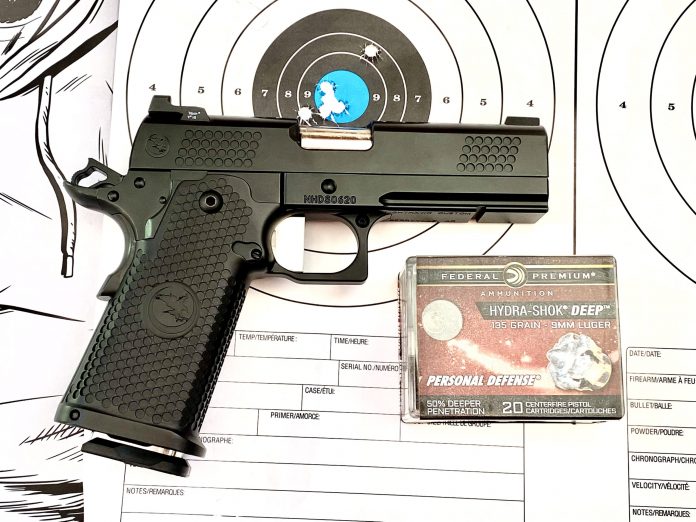 Knowing that readers sometimes get upset to read a gun review, only to then find out said gun is very expensive by review’s end, let’s tackle the issues of money, value and worth upfront.

To start, the TRS (Tactical Ready Series) Commander 1911 from Nighthawk Custom carries a hefty price tag of $4,399.00. Which has many readers asking themselves, “How the hell can any pistol be worth $4.3K?!”

Fair question. Yet the answer, at least as it seems to this writer/reviewer, is a complex one.

While the 9MM TRS Commander is very accurate, has a great trigger, and sports one of the easiest-to-operate slides I’ve ever encountered on a 1911, plus has an ammunition capacity of an impressive 17+1 (this is Nighthawk’s first Commander-sized model built on a double stack frame), does it really do anything a $500 poly-framed 9MM can’t do?

But that doesn’t truly address the central issue of value or worth, and these issues, I’d argue, can only be answered by the individual firearm consumers.

Consider this comparison. The 2022 Chevrolet Corvette starts with a substantial base price of $60,900 and can be easily tricked out with accessories and performance packages to $90K or more. A Vette with the Z51 Performance Package arrives with 495 horsepower, can do 0 to 60 in 2.9 seconds and has a top speed of 194 miles per hour.

Or you can buy a sub-compact 2022 Chevrolet Spark Hatchback with a base price of $13,600. Nicely accessorized, the Spark still costs under $20K.

Obviously, the Vette is a much faster vehicle and looks a hell of a lot cooler than the Spark. And yet….once you factor in speed limits, both vehicles will easily get you to and from work, the mall and the dentist’s office. In fact, the Spark can carry four people, the Corvette only two. The Spark also has impressive gas mileage (30 City, 38 Highway, when outfitted with Chevy’s Continuous Variable Transmission) and the Vette, let us admit, rarely passes a gas station without stopping.

So, is the more powerful Vette really worth $90K compared to the $20K Spark?

The answer not only depends upon a person’s income and tastes, but their point of view on various issues like performance, social status and how the vehicles make them feel or not feel about themselves.

Is the TRS Commander worth over $4,300? That’s not my call. But for the firearms consumer in the market for a custom-made 1911 that will probably function better than any factory-produced 1911, and carries the status that comes with custom expense? That consumer needs to take a serious look at the 9MM TRS Commander.

Now, as the to TRS Commander’s actual performance…

The solid aluminum trigger on the TRS snapped off at a very clean 1 pound, 14 ounces on average, according to my Lyman Digital Trigger Pull Gauge. It had just the slightest bit of take up before the trigger engaged the disconnector/sear, and the trigger’s serrated flat face provided a very tactile and comfortable engagement of my finger pad.

I shot the TRS outside in mid-20’s temperatures and the serrated face of the trigger always told me where my finger pad was in relation to the front of the trigger, even when my trigger finger was cold (I didn’t wear gloves) and it would’ve been easy to line up the trigger face with the first joint of my finger for less-than-optimum trigger pull and accuracy.

I love 1911’s and while I am in no way an expert of John Browning’s invention, I would note that many 1911’s I’ve used and reviewed over the last twenty years had slides that were very difficult to pull back. Some of these 1911’s had such tight slides, it was very easy to twist the gun and point the muzzle in a bad direction when attempting to rack the slide.

Not so with the TRS Commander. Part of that ease, no doubt, is due to the unique dimpling at the front and rear of the slides, which helped my fingers really press into the dimples and slide for a solid, leveraged hold.

Nighthawk has also produced a mating of slide to frame that is glass-on-glass smooth, and that plus the perfectly matched recoil spring created a slide that’s fairly effortless to rack back for loading. Yes, very easy even when starting with the slide forward, inserting the magazine and then racking back the slide to load the first round.

I also chronographed 10 rounds each of the above 9MM loads, using a Caldwell Chronograph G2 from Brownells. The air temperature was 20 degrees Fahrenheit with the muzzle of the TRS Commander five feet from the unit. With the G2 hooked to my cell phone via the Caldwell app, the average velocity results were: Browning at 1,161.2 feet per second (fps); Federal Hyrda-Shok Deep, 1,023.0 fps; and Federal Syntech Range 1,073.8 fps.

Of note, the Standard Deviation (SD)—or the measure of an ammunition’s velocity above and below the average fps–of the Federal rounds were especially low. An SD in the teens is pretty damn good. That SD suggests the ammunition will reliably leave the barrel at a fps fairly close to the average fps, indicative of good uniformity in performance. So, the Browning ammo’s SD of 15.5 is solid.

But the Federal rounds were even more impressive with an SD of 8.0 for the Syntech Range and an outstanding 4.2 SD for the Hydra-Shok. That level of velocity/fps consistency tells me Federal’s manufacturing and quality control processes are at very high levels.

I shot the TRS commander at five and ten yards offhand, and the pistol was extremely accurate at these self-defense ranges. One five shot group at ten yards with the Hydra-Shok Deep came in at just .56-inches. I got stupid and fired off Shot #6, and that expanded the group to 1.56-inches—still very nice! Another five-shot group with this ammunition at the same distance came in at .82-inches.

I got a little shoot happy with the Syntech and popped off nine rounds at ten yards, and they did a nice 1.30-inch group, while five of the shots in the lower left of the group (and my general point of aim) pegged in at .80-inches. The Browning 9MM held its own, too, with a best group of 1.12-inches for five shots, with four of those coming in at .80-inches.

Over the course of five, five round groups at ten yards offhand, the Browning averaged 1.55-inch groups, the Hydra-Shok at 1.15-inches, and the Syntech Red 1.44-inches

Part of that accuracy due to the TRS’ match grade 4.25-inch stainless steel barrel. The full-length dust cover provided added weight to the front of the pistol, helping reduce muzzle flip.
Nighthawk built the TRS Commander with concealed carry very much in mind. As such, the TRS Commander comes with unique dimpling on the front and back of the slide, matching the pattern of the grip. These dimples provide a non-abrasive surface that will not hang or snag on clothing when holstering, but still provide a very solid handle on the pistol.
The tritium front sight put me on target quickly, when it was overcast as well as when the sun bounced very brightly off the fresh Wisconsin snow. The Heinie Ledge Black rear sight featured serrations on the back, which helped reduce that snow glare.

As noted, the TRS Commander is the first Commander-size Nighthawk model built on a double stack frame, and the pistol comes with two 17-round magazines.

Nighthawk’s tag line is “One gun, One gunsmith.” And they mean it.

From the Nighthawk website: “At Nighthawk Custom, each pistol is built from start to finish by a single gunsmith….Every part used in Nighthawk Custom 1911s have been Fully Machined from bar stock billet steel and are oversized to later be hand fit. In order to create the finest 1911’s in the world, only the finest materials can be used. Starting with oversized, raw parts, our gunsmiths handcraft the pistol part by part to create a functional piece of art. All 46 parts are fit to that certain pistol, making it a unique and unrivaled pistol.”

That amount of time and precision costs money, lots of it, and in a world populated with sub-compact, look-alike pistols, the TRS Commander is definitely a Corvette. Whether or not someone wants this Vette will depend on that someone’s tastes, needs and the size of their bank account.

All I can say for sure is, this in one of the very best 1911’s I’ve ever had the pleasure to use, and I wish my income allowed me to keep it.

About the author:
Brian McCombie writes about hunting and firearms, people and places, for a variety of publications including American Hunter, Shooting Illustrated, and SHOT Business. He loves hog hunting, 1911’s chambered in 10MM and .45 ACP, and the Chicago Bears.