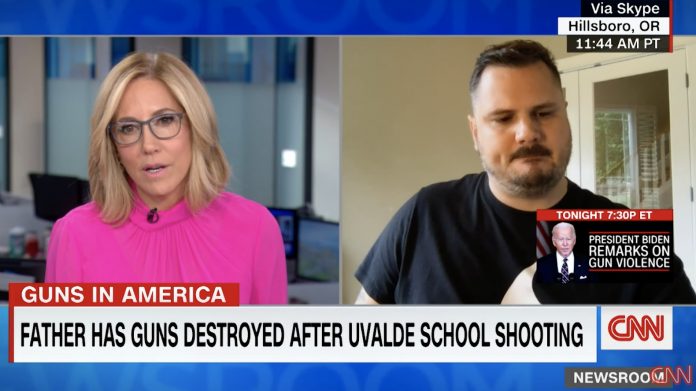 CNN is gushing over Ben Beers, an Oregon gun owner who voluntarily turned his guns over to police in the wake of the mass killing at an elementary school in Uvalde, Texas.

Beers, a father and retired Marine, posted a video on social media about his decision to quit exercising his 2A rights.

“I no longer want them,” Beers said on TikTok.

Beers turned in a 9mm handgun and two AR-15s to his local police station.

In his interview with CNN’s Alisyn Camerota, Beers says, “It’s not patriotic to own a firearm.”

He also tells Camerota he doesn’t worry about being defenseless in the instance of a home invasion, despite having two small children.

“I’m not seeing crime reports that show many break-ins with families being slaughtered for no apparent reason.  Home invasions or break-ins are usually for theft and when the homeowner is gone,” he says.  “I don’t think someone’s out trying to take my life.”

GunsAmerica also thanks Mr. Beers for his service. We’d add that he’s a grown man and he can exercise his 2A rights in the manner he sees fit. If he doesn’t believe he needs to keep and bear arms for self-defense or other lawful purposes, well, that’s totally up to him.

But the notion that self-disarmament by responsible gun owners is a noble and brave endeavor, as Camerota insinuates, is totally absurd.

As Jordan Peterson correctly observed in his book “12 Rules for Life,” evil thrives when capable individuals refuse to take responsibility for their safety.

“The forces of tyranny expand inexorably to fill the space made available for their existence. People who refuse to muster appropriately self-protective territorial responses are laid open to exploitation as much as those who genuinely can’t stand up for their own rights because of a more essential inability or a true imbalance in power,” wrote Peterson.

“Naive, harmless people usually guide their perceptions and actions with a few simple axioms: people are basically good; no one really wants to hurt anyone else; the threat (and, certainly, the use) of force, physical or otherwise, is wrong,” Peterson continued.

“These axioms collapse, or worse, in the presence of individuals who are genuinely malevolent. Worse means that naive beliefs can become a positive invitation to abuse, because those who aim to harm have become specialized to prey on people who think precisely such things,” wrote Peterson.

Being harmless or defenseless in the face of evil is not a virtue. It’s not something that should be embraced or lauded or encouraged.

And then, of course, there’s this:

Talking to Your Kids About Gun Safety with Julie Golob

How To Prevent And Treat Common Winter Injuries

Looking for the Next ‘Known Wolf’ Mass Shooter