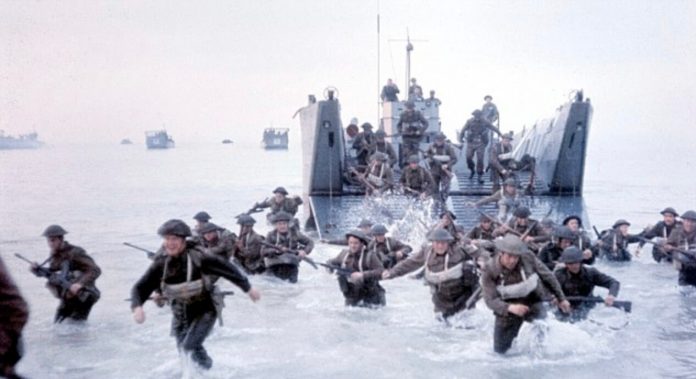 Operation Overlord. In the overall pantheon of cool military names, Overlord flirts with perfection. The term projects the sort of gravitas demanded of the event.

June 6, 1944, was a Tuesday. From the comfortable vantage of my favorite writing chair, it is tough to comprehend the truly timeless significance of D-Day. Comprising the largest amphibious invasion in human history, on that fateful morning, some 156,000 Allied ground troops supported by another 195,700 sailors seized a foothold on mainland Europe. Never before had there been such a single seminal moment that so starkly reflected the struggle between the forces of good and evil.

Europe was engulfed in darkness. For four long years, mainland Europe had endured under the heel of the Nazi jackboot. In 1940 Hitler’s thugs had waltzed across France and the Low Countries like they owned the place. As D-Day approached Dwight David Eisenhower’s boys now stood poised to give the Germans a healthy dose of perspective.

It cost the Allies more than 10,000 casualties to acquire title to that precious beachfront property in Normandy, all in that single day. Of those thousands of casualties, some 4,414 were confirmed dead. We lost 185 Sherman tanks. Casualties on the German side ran somewhere between 4,000 and 9,000. So many of them were buried underneath untold tons of rubble that the final tally was known only to God.

Around 15,000 Frenchmen died in the pre-invasion bombardment. Roughly the same number perished in the crossfire during the invasion. In aggregate that’s more folks than live in my thriving little Southern town. The French equivalent of every man, woman, and child in Oxford, Mississippi, died to evict the Germans from Western France. Through the lens of history, it is easy to overlook such extraordinary stuff as that.

Those numbers are the purview of the Generals, politicians, and historians. The few men I have known well who were there gave a very different perspective. Their world was much, much smaller. One gentleman, a member of the 5th Ranger Battalion who landed in the first wave, described events as utter chaos. They cared little for strategy. Life is distilled down to resisting death whenever possible and killing the enemy. It was here on that blood-soaked beach that General Norman Cota coined the epic phrase, “Rangers, lead the way!”

In times of such unimaginable madness, a man’s true nature bubbles forth. Many self-described brave men turn out cowards, while some of the more quiet sort show unimaginable resolve. Such combat is the ultimate crucible. It burns away the dross and leaves a man’s core character exposed for all to see.

Of the 83,115 British troops who landed as part of Operation Overlord only one man earned the Victoria Cross. Abbreviated VC, the Victoria Cross is England’s highest award for valor in the face of the enemy. It is the British equivalent of our own Medal of Honor, and it is not easily acquired.

Stanley Hollis was born in Middlesbrough, North Riding of Yorkshire, England, in 1912, six years before the end of the First War to End All Wars. As a child, he worked in his parents’ shop selling fish and chips. At age 17 he apprenticed as a ship’s navigator, making regular voyages to the western coast of Africa. He contracted blackwater fever, a particularly vile malarial variant, and was forced to quit the merchant marine.

Hollis came home, married, and started a family. In 1930 he enlisted in the Territorial Army, the British counterpart to our Army National Guard. With the outbreak of WW2, he deployed to Europe with the British Expeditionary Force. He narrowly escaped during Operation Dynamo, the evacuation of Dunkirk. Dynamo may be the second coolest military operation name ever contrived.

Hollis fought at El Alamein with Montgomery’s Eighth Army and was subsequently wounded during the invasion of Sicily in 1943. This was but one of multiple combat wounds Hollis received during the war. He was shot or hit with shrapnel so many times his men came to think him unkillable.

On June 6, 1944, Hollis had recovered sufficiently to join the 6th Green Howards as they stormed Gold Beach. Serving as a Company Sergeant Major Hollis moved forward with his troops. In their rush to get off the beach, the British inadvertently overlooked a pair of German fortifications.

Realizing that these active emplacements now threatened the flank of the British invasion force, CSM Hollis charged the first, his Sten gun blazing. Once he reached the pillbox under heavy fire he shoved the muzzle of his Sten through the embrasure and emptied his magazine. Leaping atop the fortification he swapped magazines, threw a Mills bomb through the back door, and emptied his second magazine behind it. In the process, he killed two of the German defenders and captured the rest.

Hollis immediately indexed to a nearby slit trench and supporting fighting position, singlehandedly taking another 26 prisoners. Later that day Hollis led an assault on a heavily fortified position that included a field piece and several MG42 machineguns. Seizing a PIAT gun, Hollis fired upon the German cannon from a range of 50 meters. This attack was ultimately repulsed, but two of his men were pinned down in the aftermath.

Hollis then rushed back into the enemy fire, this time with a Bren gun. He distracted the German defenders long enough for his men to escape. In the process, he threw a Mills bomb but forgot to prime it. The German defenders, however, did not appreciate this. As they scattered in the face of the inert grenade Hollis charged their position and cut them down with his Bren.

The Sten gun was a desperation weapon developed by Reginald Shepherd and Harold Turpin while working at the Enfield Small Arms Factory. The name Sten is a portmanteau combining elements of all three names. Designed in 1940 specifically to be inexpensive and easy to produce, the Sten was intended to help stave off the expected seaborne invasion by the Germans. More than 4 million copies were produced, making the Sten the second most-produced SMG of the war after the Soviet PPSh.

The Sten was manufactured in five different marks during the war. The Mk IIS and the Mk VS were the world’s first operational sound suppressed SMGs. The Sten fed on a ghastly side-mounted double-column, single-feed magazine and cycled at a sedate 500 rounds per minute. At a time when an American M1928A1 Thompson cost $200, the Sten ran about $11. That’s roughly $200 today.

The PIAT (Projector, Infantry, Anti-Tank) was technically a spigot mortar. Designed to replace the obsolete Boys antitank rifle, the PIAT was a 32-pound beast of a thing. While the published maximum effective range was 115 yards, in reality, the weapon was only reliable out to about half that. However, it did launch a shaped charge warhead that, when it detonated properly, was quite effective at penetrating German armored vehicles.

The PIAT benefitted from not having any backblast upon firing, but the recoil was said to be murderous. The gun itself contained a massive spring that kicked the 2.5-pound round out. The recoil force from firing would theoretically re-cock the heavy action. 115,000 copies were built.

The Mills bomb was the standard British hand grenade from 1915 into the 1980s. More than 75 million were produced. The Mills bomb was named after William Mills and produced at the Mills Munitions Factory in Birmingham. This patented design was based upon a previous Belgian grenade contrived by a Captain Leon Roland. There actually resulted in a most acrimonious row over patent rights.

The Mills bomb evolved over time. It was eventually configured such that it could be fired from a rifle equipped with a grenade discharger cup. The serrations in the grenade body were included to make the bomb easier to grip, not to enhance fragmentation.

The Mills bomb was a defensive grenade. This means that it produced a large volume of lethal fragments. By contrast, the German stick grenade was an offensive grenade that produced a great deal of blast but not so many fragments. A competent British Tommy was expected to throw a Mills bomb between 15 and 27 meters. The effective range of the grenade’s fragments was on the order of 90 meters.

The Bren gun was developed from the Czech ZB vz.26 light machinegun in the mid-1930s. Chambered for the British standard .303 cartridge and cycling at around 500 rpm, the Bren was one of the most reliable and effective light machineguns of the war. After WW2 the British rechambered the Bren for 7.62x51mm and redesignated it the L4A4. In this configuration modernized Bren guns served all the way through the First Gulf War.

Three months after the D-Day invasion CSM Hollis was wounded once more, this time in the leg. He was subsequently evacuated back to England. He received his Victoria Cross a month later from the hand of King George VI himself. After the war ended, like so many of those great old heroes, Stanley Hollis simply wanted to have a life.

Hollis worked as a sandblaster at a local iron works before opening a motor repair business. He spent five years as a ship’s engineer from 1950 until 1955. Apparently earning your nation’s ultimate award for gallantry in combat trumps a little malaria.

The man needed some stability. Stanley Hollis took over the operation of the “Albion” public house in Market Square, North Ormesby. Under his management, the name of the pub was changed to “The Green Howard” after his wartime combat unit.

Stanley Hollis never fully recovered from his wartime injuries. His children later reported that he carried ample German shrapnel as well as a couple of bullets around in his body for the rest of his life. If he stood too long at the pub his leg and foot wounds would purportedly begin to bleed spontaneously. On February 8, 1972, CSM Stanley Hollis, VC, died. He was fifty-nine years old.

A commemorative plaque followed, as did a bronze statue of Hollis with his Sten gun. A Middlesbrough school was renamed Hollis Academy in his honor in 2016. Stanley Hollis’ Victoria Cross is on display in the Green Howards Museum in Richmond, North Yorkshire, today. We just don’t seem to make guys like that anymore.

Microbes in glacier ice could spark a wave of new pandemics if released.

Kendall: Air Force needs to make a decision on F-35 engine in FY24 and ‘get on with it’