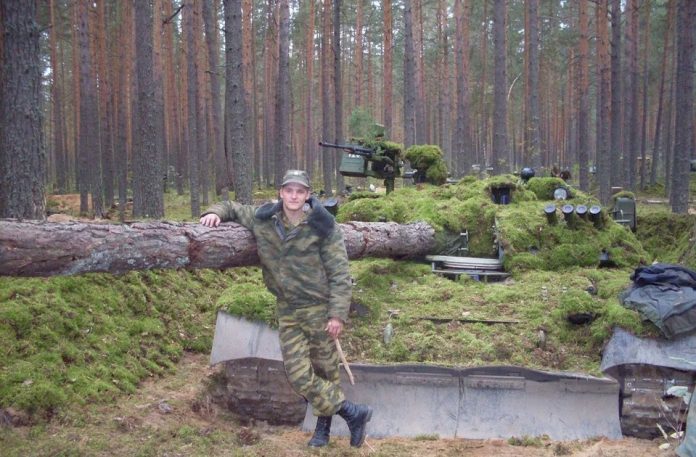 Land warfare has been technicised the way air warfare had decades earlier, notwithstanding that Russia apparently wages war with a motley of equipment rooted mostly in the 1960’s to 1980’s.

The technicised warfare leads to some unintuitive optimal choices. This blog post will propose a *possibly* optimum approach that *might* be superior to a more intuitive, obvious approach.

The traditional camouflage of AFVs (let’s just think: tanks) is the application of camouflage paint, and the German three-colour paint scheme fits much of Central and Eastern Europe. A big issue with such camouflage is that apparently nobody does anything against the dark spots caused by shadows, even though simple LED lights could help with that. 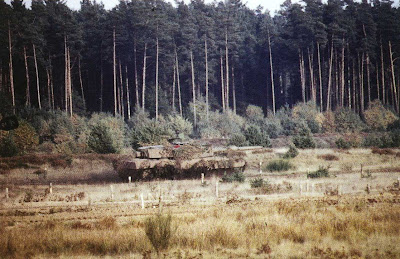 Maybe everyone thinks that dirt would make lights impractical, but shame on engineers who cannot find an acceptable solution to that.

Proper engine maintenance can avoid treacherous smoke clouds that could be emitted from engine exhausts (though sometimes that’s intended, as diesel injection into hot exhausts is a simple method to produce concealment by smoke/fog). Improvised camouflage included the application of foliage on tanks. 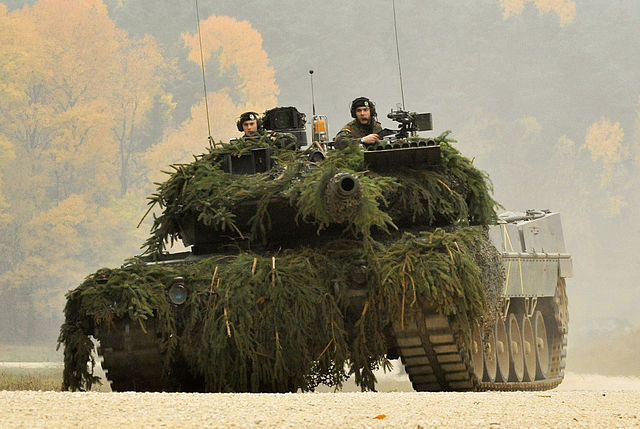 Special paints/coatings reduce the thermal signature and may reduce the radio frequency reflexivity (significant for ground moving target indicator / (imaging) synthetic aperture radar modes) and thus the range at which an AFV can be detected and categorised as either wheeled or tracked.

A vastly more effective method than coating is for most surfaces to use something like Multisorb. 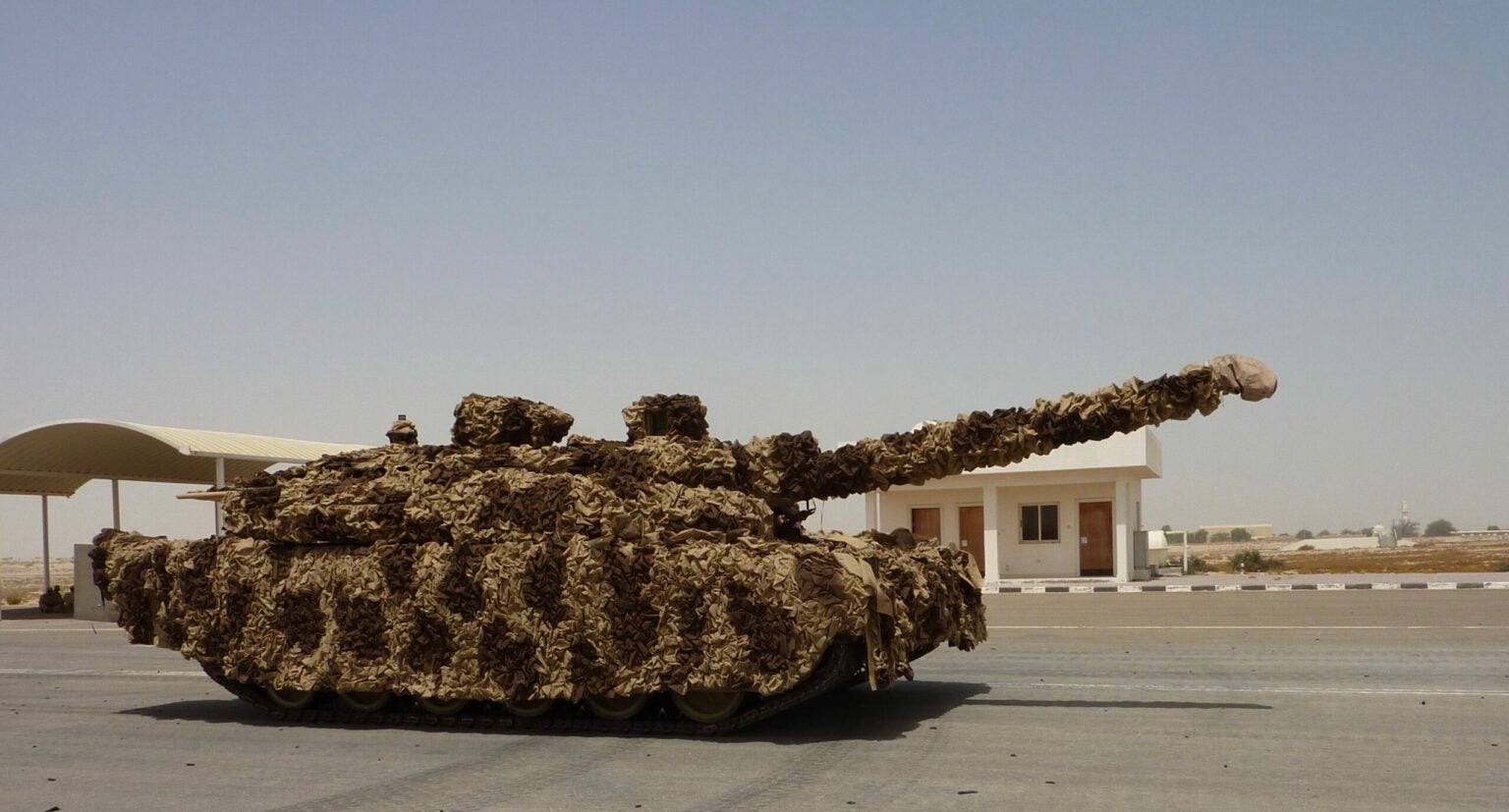 The Russian NII Stali marketed extra camouflage kits based on mats for years (“Nakidka“). They were cheap and at least at some thermal sensor settings spectacularly effective infrared signature management and camouflage tools (and I saw exactly zero of those used on war footage, albeit recently some photos popped up with claims that the Russians were using them).

These camouflage approaches serve the purpose of delaying detection and making identification extremely difficult (the latter is not necessarily good; the Americans even mount identification plates on their tanks that are very easily visible in thermal imagery to make ID easier).

This is an intervention early on in the engagement chain, which goes like (there are different versions, this is a quick recall from memory):

Let’s look at a completely different paradigm. We could mess with rangefinding and shot (guidance of shot) instead.

Look at this example of a laser target designator. I chose this one because it mentions the wavelength of the laser, unlike most hardware brochures. 1064 nm wavelength, thus it’s a Neodymium-doped yttrium aluminum garnet laser. Compatible semi-active laser guided munitions will be optimised to make use of this target designation wavelength, maybe a few others as well (there’s a limited quantity of laser wavelengths in practical use).

Now imagine the tank isn’t camouflaged to delay detection, but to mess with the laser rangefinding and semi-active laser guidance.Users of handheld golfing and hunting laser rangefinders (which are incredibly cheap) know by experience that the effective range of the rangefinder depends on the reflexivity of the target. You may measure the distance by aiming at an object close to a target AFV, but for semi-active laser guidance you need to point the laser on the target and get enough reflection off it for the tiny sensor in the missile to detect reliably.

Let’s think of a “black” AFV. An AFV that’s almost non-reflecting on the wavelengths of target designation lasers and laser rangefinders, and possibly even so at the expense of traditional camouflage in the visual and IR spectrum. There are materials that absorb extremely well at certain wavelengths and absorb little at others (example article), similar to coloured glass in the visual spectrum.

Now if we found and applied a suitable material that absorbs the troublesome laser wavelengths extremely well, then the effective of laser laser target designation and on open fields also laser rangefinding might be reduced greatly. The effect could be comparable to the reduction of effective radar ranges by “stealth” aircraft.

The optimum camouflage coating (or camouflage mat) for warfare against a threat that relies very much on laser target designation (such as certain drones that drop semi active laser-guided glide bombs on AFVs) might actually not look like camouflage to the naked eye (visible spectrum).

There might be huge tactical consequences from this. Such a different approach would lend itself well to a full-size tank company attack and use by tanks in overwatch positions (in both cases detection and ID is simple regardless of camouflage), but would be much less suitable for tank platoons in delaying actions (essentially ambush tactics).

Camouflage mats could be designed to be reversible, with high laser absorption on one side and good camouflage against detection on the other side.

Previous D&F blog posts that were similarly disrespectful to the orthodox concept of camouflage:

P.S.: I’m totally aware that arms industry industry engineers have very likely thought of this decades ago, and the approach may be more or less implemented by paying attention to absorption  properties when selecting coatings. It may also be true that no super-convincing absorption material is known and half-assed efforts yield no decisive advantage. I’m just pointing out there may be something, and it may be a big deal in a world with many semi active laser guidance threats. This also means you should not trust SAL-guided AT missiles completely, for even if your country doesn’t know a super absorber material, your adversary might do so.

I also understand that this problem applies in some seasons and areas.