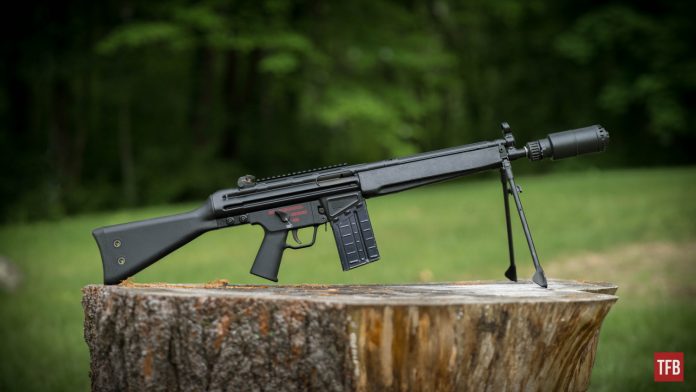 Good morning everyone and thank you for joining us for TFB’s Silencer Saturday brought to you by Yankee Hill Machine, manufacturers of the YHM R9 multi-host suppressor. Last week… well last week I took Saturday off to finish a few projects, my apologies for missing our usual Saturday meetings. But the last time we talked we were discussing the AB Suppressor Raptor reflex suppressors – impressive performance. The week before that we walked through the B&T USA ROTEX-X NATO mounting system. We return this week with a look at the B&T RBS suppressor and the QDR mounting system. How does it stack up? Let’s take a look. Usually when we discuss ‘reduced back pressure’ we are talking about mitigating the added forces on a weapon system by a suppressor. Cyclic rates, unlock times, and malfunctions can all be symptoms of adding a silencer to an untuned firearm. A lot of this has to do with the way suppressors have been evaluated in the past. Maximizing noise reduction at the muzzle of rifle suppressors meant restricting all the gases from exiting the bore – a requirement that mostly stems from MILSTD decibel reduction testing. In basic terms, if you pinch off a hose, less water comes out, but the hose and valve experience increased pressure. Reminder, I am not an engineer.

Increased back pressure, depending on the weapon system design, can also force gasses and particulate matter into the action and out the ejection port or other openings like the charging handle in the AR-15/M-16 platform. At best, the phenomenon is uncomfortable, at worst, toxic carcinogens are directed into the shooter’s respiratory system. Thankfully, governments/militaries are realizing the importance of suppressors AND the benefits of not poisoning soldiers with their own guns and ammo. I’d like to think that the value the health of our veterans, but I’m sure medical disability claims also play a role as well. Either way, it’s forcing the acceptance of “flow through” designs on select fire carbines and rifles, as well as belt-fed crew-served weapons. As evidence, look at SIG Sauer’s Low-Tox SLX line, CGS, and of course OSS on H&K rifles. To achieve the goal of reducing back pressure, B&T has designed the RBS suppressor line to give the expanding gases a pathway to escape out the front rather than a traditional baffle stack that squeezes the bore tightly around the bullet. It’s difficult to see in this picture, but the blast baffle is perforated with small holes. At the front, small holes can be seen between the outer fins, allowing gas to escape from somewhere other than the bore.

As my favorite saying goes, there is no free lunch. Allowing more gas to escape faster will usually mean an increase in decibel levels as measured at the bore. But it should also mean the reduction of decibels at the shooters ear and a lower amount of toxicity. The delicate balance comes when trying to meet some MILSTD contract requirements of 140 dB or less at the muzzle. As consumers, we don’t care about meeting a number, we just want the best noise reduction possible with the least amount of blowback. Besides, hearing protection should be worn with all supersonic rifle rounds.

We’ll get back to shooting when the rain finally stops. I’ve picked a short barrel Hk91 clone from PTR as our first platform, but the SIG 716i AR-10 will make an appearance as well. Let’s take a look at the QDR mounting system on the B&T RBS suppressors.

B&T’s latest commitment to suppressor innovation is our Reduced Backpressure System line of suppressors (RBS). RBS technology is a giant leap forward in reducing the amount of back blast to the shooter that is composed of carbon monoxide, ammonia hydrogen cyanide, as well as the content and composition of metals in the dust emitted from various small arms weapons systems during prolonged firing by the shooter.

Note: This diagram includes the measurements for the standard version, not the compact version. The RBS QDR suppressors are compatible with the Surefire muzzle brake, flash hider, and Warcomp muzzle device attachments. Steps to mounting the B&T USA RBS suppressor with the QDR Surefire mount:

Warning: Always make sure firearms are unloaded and pointed in a safe direction before performing any maintenance. If you are unsure of your abilities, spend the money and have a competent gunsmith handle the work.

1. Clean the contact surfaces on the suppressor and flash hider/compensator and make sure that they are free from dirt and mechanical damage.

a. If you are using a muzzle device that needs to be timed, be sure to use shims and not a crush washer

2. Unscrew the nut on the suppressor till the mechanical stop. 5. Before firing, check that the barrel and suppressor are properly aligned and free of obstructions.

6. To remove the suppressor, follow the steps in reverse and depress the leaf spring to unscrew the SD-nut.

The alignment notch in the Surefire muzzle devices (this is the 7.62 Warcomp). The SD-nut tightened to the stop pin. There you have it – the RBS suppressor and the QDR mounting.

Thanks for reading. Be safe, have fun, and we’ll see you back next weekend for another Silencer Saturday.

All YHM Products At Brownells

Against near-peers, unmanned systems must maintain autonomy even when contested