NORTH KINGSTOWN, R.I.: “I declare this keel to be well and truly laid,” Congresswoman Eleanor Holmes Norton, D-DC, proclaimed while standing in front a massive submarine module with an American flag draped over it.

With those words, and in the presence of 1,000 General Dynamics Electric Boat employees, their families, naval officers, lawmakers and Navy Secretary Carlos Del Toro, the service and Electric Boat on Saturday laid the keel for the future USS District of Columbia (SSBN-826).

The ceremony is the latest milestone for the Navy’s No. 1 acquisition program that in recent years has begun transforming from a distant, future plan articulated mostly on paper to the enormous submarine modules now surrounded by scaffolding here at prime contractor Electric Boat’s facility in Quonset Point, R.I.

“Traditionally, the keel laying celebrates the sort of ceremonial birth of the ship. Today, we’re celebrating the birth of District of Columbia, and the culmination of 15 years of work on our nation’s highest priority defense acquisition,” Electric Boat President Kevin Graney told guests who came to the Quonset Point waterfront.

The new submarine class sits at the center of the country’s nuclear deterrence efforts. Commonly called the most survivable leg of the nuclear triad, the new ballistic missile submarines are a critical asset of power projection the United States intends to wield to deter foreign countries from using their own nuclear weapons.

Inside of an otherwise unassuming white warehouse-like building marked by Electric Boat’s logo, guests gathered in front of a stage set below the submarine module — called a “quad pack” — donning the American flag. Other parts of the future boat taking shape here also flanked the stage and had banners bearing the submarine’s official insignia.

The boat’s insignia shows an image of a woman holding a trident draped in both the American flag and Washington D.C.’s flag with the words “justitia omnibus” written below her, meaning “justice for all,” while a dark outline of Capitol Hill and the Washington monument sits in the background.

For US Navy ships, the keel-laying ceremony involves the ship’s sponsor, in this case the congresswoman, inscribing her initials onto a steel plate that will sit at a “place of honor” on the future vessel, Graney explained. Norton personally wrote her initials onto the plate with a marker, while Electric Boat employee Maria Betance-Pizarro was tasked with carefully welding over the letters. 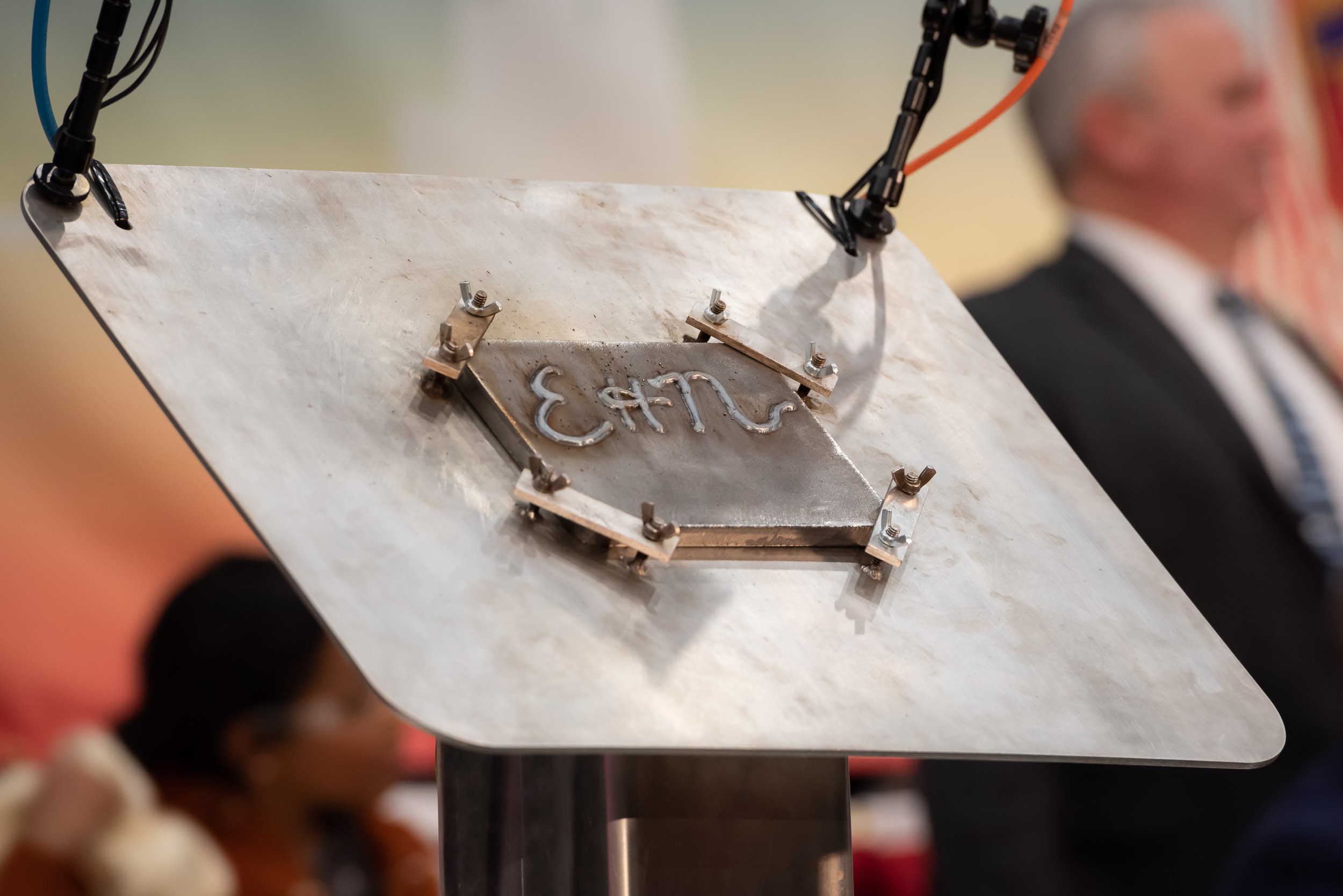 The steel plate with the ship sponsor’s initials is installed at a “place of honor” on the submarine. (Photo courtesy of General Dynamics Electric Boat.)

One after another each of the guests spoke about the importance of the submarine to the future fleet, praised Electric Boat’s staff for their years of work thus far and lauded the congresswoman for her decades of service. Once it was finally her own chance to speak, Norton raised an issue for which she has become a leading advocate, although it was not mentioned by any of the other guests: the District of Columbia potentially becoming the country’s 51st state.

“It is fitting that it [the submarine] recognizes the jurisdiction that will become the 51st state of the United States,” she said to applause. “As we celebrate this keel-laying today, we also underline that Congress must no longer exclude the residents of nation’s capital from the democratic process, forcing residents to watch from the sidelines as Congress votes” on laws that impact them.

The keel laying ceremony comes one day after Del Toro announced the first ship in the Columbia-class program will be renamed USS District of Columbia rather than USS Columbia, the original name selected in 2016.

The change, according to a May 3 statement from Del Toro’s office, is due to a projected brief overlap in the timelines of the future USS District of Columbia (SSBN-826) with the Los Angeles-class attack submarine Columbia (SSN-771).

The Navy recently decided to extend the lives of some Los Angeles attack submarines, and federal law states the service may not have two vessels commissioned simultaneously that share the same name.

The change in name also makes clear the fact the newer submarine is named for the nation’s capital city, while the older boat is named for cities in South Carolina, Missouri and Illinois. Throughout the service’s history, eight vessels have been named “Columbia,” but the new submarine will be the first to be called “District of Columbia.”

The first boat in the District of Columbia-class program is on track to be delivered in 2027 and begin its first patrol in 2030, Del Toro reaffirmed in recent congressional hearings. The program of record calls for the service to purchase a total of 12 submarines that will continue to patrol into the 2080s.

The service’s latest budget request is seeking $5.9 billion in procurement and advanced procurement funding for the program. House and Senate lawmakers are scheduled to begin marking up the annual defense policy and spending bills later this month.

What We Love About Revolvers! What Do You Love? -The Firearm Blog