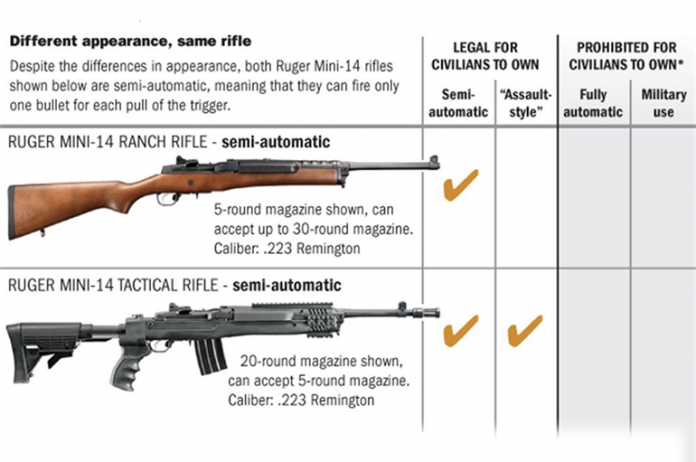 [Biden] does not want to talk about the details of [the 1994 assault weapons ban], which would reveal that the category of firearms it targets is defined by functionally unimportant features such as folding stocks, pistol grips, and barrel shrouds. He does not want to address the basic problem with such laws: They leave untouched guns that fire the same ammunition at the same rate with the same muzzle velocity as the prohibited models.

Biden instead insists that everyone knows the 1994 “assault weapon” law, which expired in 2004 and included a ban on the sale of magazines that hold more than 10 rounds, reduced mass shootings. “In the 10 years it was law,” he says, “mass shootings went down. But after Republicans let the law expire in 2004 and those weapons were allowed to be sold again, mass shootings tripled. Those are the facts.”

There is little evidence to support the implication that the ban reduced mass shootings. Nor does it seem that the law had an important impact on gun violence generally.

“It is premature to make definitive assessments of the ban’s impact on gun crime,” University of Pennsylvania criminologist Christopher Koper warned in a 2004 report commissioned by the Justice Department. Koper and his co-authors noted that the use of “assault weapons” in gun crimes (primarily pistols rather than rifles) had declined in the six cities they examined, although that change “was offset throughout at least the late 1990s by steady or rising use of other guns” equipped with “large capacity magazines” (LCMs).

“The failure to reduce LCM use has likely been due to the immense stock of exempted pre-ban magazines,” Koper et al. said. “Because the ban has not yet reduced the use of LCMs in crime, we cannot clearly credit the ban with any of the nation’s recent drop in gun violence.” If the law were renewed, they said, “the ban’s effects on gun violence are likely to be small at best and perhaps too small for reliable measurement.”

That report focused on the impact of restricting LCMs, which it suggested “could have nontrivial effects on gunshot victimizations” if it actually succeeded in reducing the supply available to criminals. Notably, the report did not treat the distinction between “assault weapons” and other semiautomatic firearms as important (emphasis added): “The few available studies suggest that attacks with semiautomatics—including [assault weapons] and other semiautomatics equipped with LCMs—result in more shots fired, more persons hit, and more wounds inflicted per victim than do attacks with other firearms.”

Koper et al. noted that the “assault weapon” ban “targets a relatively small number of weapons based on features that have little to do with the weapons’ operation, and removing those features is sufficient to make the weapons legal.” Biden himself has conceded that the 1994 ban did not affect the lethality of legally available firearms, noting that it allowed the sale of guns that were “just as deadly.” That is also true of the new, supposedly improved version that Biden is pushing.

“Evidence for the effect of assault weapon bans on mass shootings is inconclusive,” the RAND Corporation said in a 2020 review of research on state bans. It called the impact of such laws “uncertain.” Last week, RAND researcher Andrew Morral likewise noted that studies of “assault weapon” bans “don’t yet provide enough scientific evidence to indicate what their effects might be.”

What about the claim that Biden made in his speech? “By some definitions,” Morral writes, “mass shootings declined in the United States during the period of the federal ban, but because mass shootings remain, at least in a statistical sense, relatively rare, and because rates of mass shootings are highly variable from year to year, there are methodological challenges to reliably detecting even fairly strong effects for these laws.”

Biden not only ignores these subtleties; he refuses to acknowledge that there is any controversy at all about the impact of the 1994 ban. “These are the facts,” he says, implying that anyone who thinks otherwise is either woefully misinformed or maliciously dedicated to promoting the murder of schoolchildren.

Our dog got skunked again. A year old, she should have known better.

How and When to Use a Tourniquet